Leading British genealogy website TheGenealogist.co.uk has added over 150,000 World War Two prisoner of war records to its already significant military records collection. These new records detail Officers and other ranks from the British Army, Royal Navy, RAF and those members of the British Empire land forces that were held as PoWs in Germany and German-occupied territories. This release will allow researchers to discover servicemen held by the Germans between 1939-1945 and includes many of the brave escapees whose stories of breaking out and dashing to freedom have captured the imagination for decades. These records allow users to:

Covering the Nazi German camps in Europe, these lists are taken from official alphabetical nominal registers and reveal names and other particulars of:

Joining an already comprehensive range of military records on TheGenealogist that span from 1661 to the 1940s, these lists are a useful addition for researchers. The site’s military collections already include Army, Navy and Air Force Lists, Dambuster records, World War One PoWs, and many other records.

Examining some of the names of prisoners of war released online at TheGenealogist.co.uk allows us to uncover the brave and determined Allied servicemen who made escape attempts from the Nazi German PoW Camps. One brave serviceman, although hampered by being a double amputee from an air accident from before the war, still did his duty to try and escape: Acting Wing Commander Douglas Bader, whose story was immortalised in the book and film Reach for the Sky and whose record is in this collection.

On 9 August 1941, Bader, a formidable air ace, was flying a Spitfire on patrol over France when he was forced to bail out over German-occupied territory. He had jettisoned the spitfire’s cockpit canopy, released his harness pin, and the air rushing past the open cockpit started to suck him out. Unfortunately, for Bader, his prosthetic leg was trapped in the plane and he was part way out of the cockpit but still attached to his aircraft. Bader and his aircraft fell for some time before he released his parachute, at which point the leg’s retaining strap snapped under the strain and so he managed to get free of the plane. Captured, the Germans treated him with respect and even gave the British free passage to drop off a replacement leg for Bader over a German-occupied French airfield.

Bader didn’t appreciate being a prisoner of war and made a number of escape attempts. Because he was considered likely to break out again by his captors, he was eventually sent to the infamous Colditz Castle – as we can see from the record on TheGenealogist, which shows he was incarcerated in Camp No: O4C, which relates to Oflag 4C Saalhaus Colditz. It was here that Douglas Bader remained for the rest of the war until April 1945 when the camp was eventually liberated by the United States Army.

His name can be seen on the Battle of Britain War Memorial on the Victoria Embankment. A record, plus an image of this memorial, can be found on TheGenealogist among other military records that also include mentions of Douglas Bader in the various Air Lists. 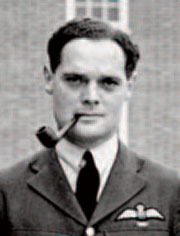 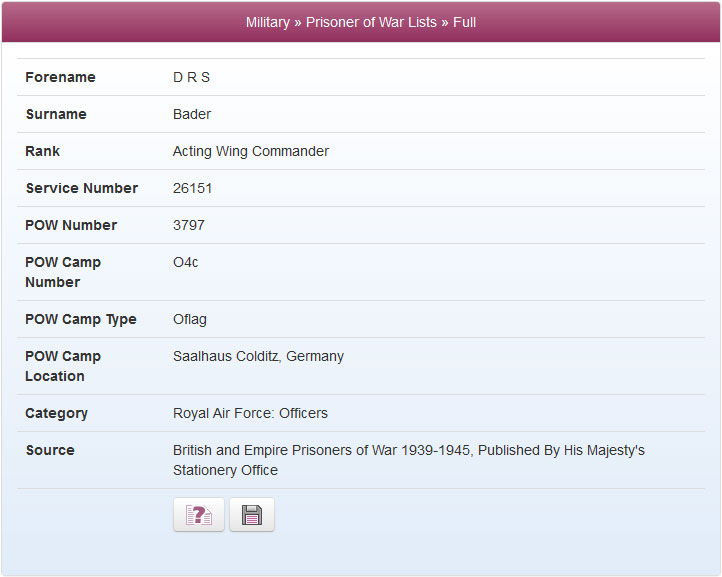