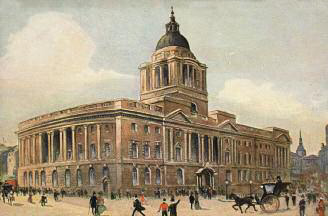 TheGenealogist has added almost 700,000 entries for prisoners to its Court and Criminal Records collection. Sourced from the HO 8 registers held by The National Archives, these documents contain records from the years 1821 to 1876. This expands the site’s criminal collection to over 1.3 million individuals between 1801 and 1876.

These prison registers give family history researchers details of ancestors who were imprisoned in a number of convict prisons from Broadmoor to the Warrior convict hulk. The records reveal the names of prisoners, offences the prisoner had been convicted for, the date of their trial and where they were tried.

You can use the quarterly prison registers to find ancestors guilty of crimes ranging from theft, highway robbery and libel to murder; discover the sentences received; see the age of a prisoner; and find out where they were sentenced and to which prison they were sent.

For more information, read the article ‘A child poisoner and a criminal lunatic detained at Her Majesty’s pleasure’ at www.thegenealogist.co.uk/featuredarticles/2019/ho-8-historic-prisoner-records-reveal-a-child-poisoner-and-a-criminal-lunatic-detained-at-her-majestys-pleasure-1049/.

TheGenealogist has released the records of 144,793 individuals added to its Worcestershire Baptisms (in partnership with Malvern FHS) collection, plus an additional 20,000 individuals on headstones from the UKIndexer project, where volunteers help their fellow genealogists by indexing and/or photographing the monumental inscriptions in churchyards and cemeteries.

Headstone data newly released includes the transcriptions and images for St Giles, Imber on Salisbury Plain, useful for those with ancestors buried there as it is only open a few days a year. St Giles Church is in the deserted village of Imber, Wiltshire and was built in the late 13th or early 14th century. The village falls within the British Army’s training grounds on Salisbury Plain and is deserted as a result of the entire civilian population being evicted in 1943 to provide an exercise area for American troops preparing for the invasion of Europe during the Second World War. Once the war came to an end the villagers would have liked to return but were not allowed. The church is open for visitors and services only on specified days of the year when the Ministry of Defence allows access. These fully searchable records released this week are available now to Diamond subscribers of TheGenealogist.