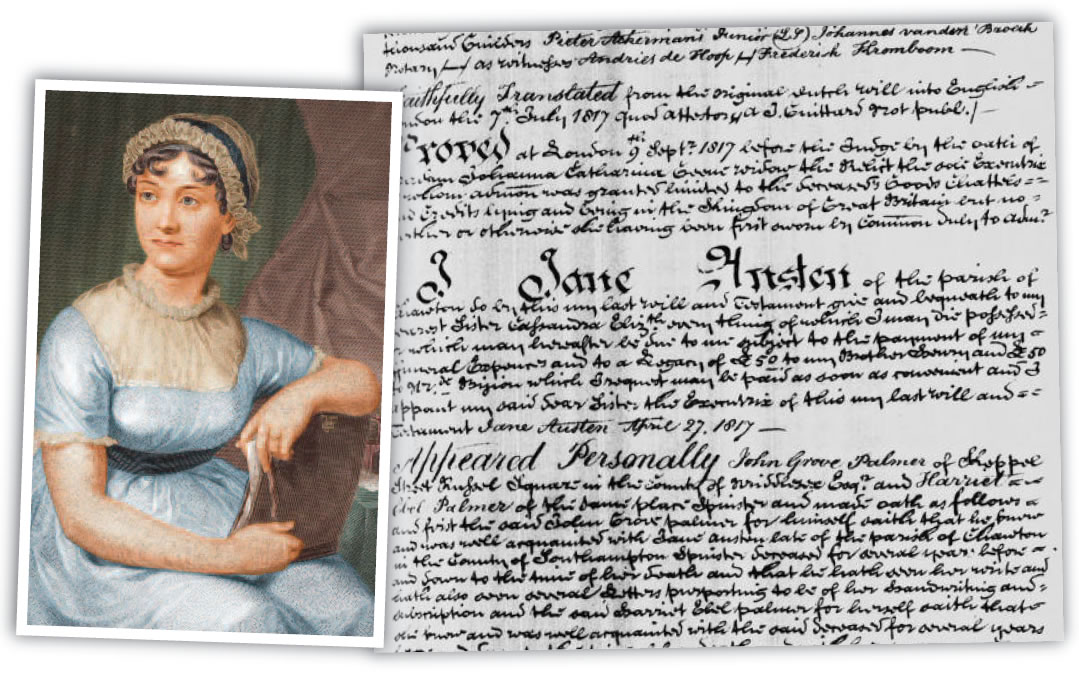 A wealth of wills

Will records available online reveal details about your family's wealth

With the amount of documents and records available when researching your family history, it is easy to overlook family documents that may contain valuable information. One of those key documents often forgotten about is the will record of an ancestor. With will records available to access from 1384 at www.TheGenealogist.co.uk, there's a large selection to view.

Wills are fascinating records to view. Here, we look at some famous examples to see just what can be found when looking at these records.

TheGenealogist uniquely provides actual images of wills proved within the Prerogative Court of Canterbury (PCC) – i.e. the original document that our ancestors had drawn up in the event of their death.

Firstly, let's search for the will record of author Jane Austen. By searching for 'Jane Austen' in 1817 in the wills section of the Master Search feature of TheGenealogist, we find her record. The date of the will returned is April 1817. Austen died in July of that year.

To the right we see a copy of the actual will record and we are able to see her final wishes and testimony as to how her final estate should be divided. After a number of years of contrasting fortunes, her books has been published and were selling well, making her final years more comfortable.

Before 1858, Wills for England and Wales were proved in the church courts. The two major courts were called the Prerogative Courts of either Canterbury or York. Wealthy people would have a Will proven in the prerogative courts. If the Wills weren't proved in either of the two prerogative courts they were proved in smaller regional 'consistory' courts. The smaller regional courts were used for wills of lesser values by are still invaluable in our research if our ancestors were less wealthy. 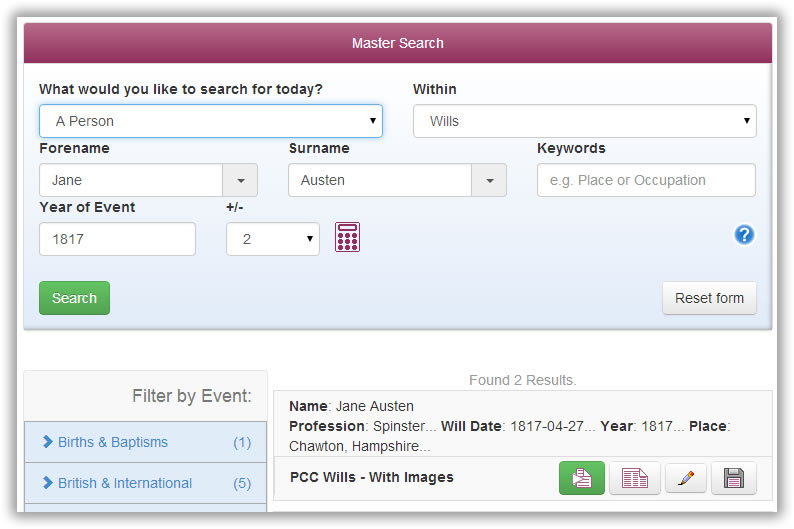 Nearly 500 years of will records

All wills from 1384 up until 12 January 1858 had to be proven in a church court to ensure the will was legal. Wills were proven in more than 250 church courts across the country, and the records of these are now stored mostly in local record offices.

TheGenealogist has a substantial collection of Wills and Will indexes available online, including the index of the Court of York and full wills for the Court of Canterbury. The unique search features provide a simple way of accessing these will records quickly and easily.

There are more than one million records in the Prerogative Court of Canterbury (PCC) 'Wills and Probate' collection, which covers the full span from 1384 to January 1858. The records are copies of registered wills, which were written into volumes by the clerks at the church courts; many earlier records are in Latin.

Wills can tell us a lot of things about family relations at the time. We find out how successful the person making the will was and how much they were able to leave the beneficiaries. We also see who was favoured, was there a child who was left more or less than other siblings? Was someone left out completely due to a family feud?

It was not just the wealthy who made wills. Sailors who joined the ever expanding Royal Navy were legally required to make wills in case the worst was to happen in their often dangerous and hazardous career. Poorer people also often wanted to leave behind their meagre possessions to be distributed fairly among their dependants, as well as using the document to express their hopes and wishes for their family. Some of the index records of these smaller wills that were administered in the smaller regional courts, with estates under the value of £5, are also found at TheGenealogist.

Examples such as on these pages show the extra information that can be obtained about our ancestors that would be difficult to find from other sources. It's worth trying to discover if your ancestors left a will and who they left their money and possessions to.

At TheGenealogist, the clarity of the copy of the actual will is high and allows a researcher to view an image of an actual will dating back as far as the 14th century. It's also the largest selection of such records currently available online.

Another will record from a well-known individual on file at www.TheGenealogist.co.uk belongs to The Right Honourable Horatio Nelson, 1st Viscount Nelson of the Royal Navy.

As well as being a celebrated military hero, Nelson has a colourful private life, becoming estranged from his wife Frances and then a partner of the married socialite Lady Emma Hamilton. He then lived with Hamilton and her husband in a romantic arrangement that intrigued the press at the time. Nelson had a daughter with Lady Hamilton, named Horatia.

A search at TheGenealogist finds the will records of Horatio Nelson in a quick mouse click. The results return two wills: his first will was made in 1803, this was then revised in 1805 to include Lady Hamilton and their daughter.

The revised will in 1805 contains Nelson's wishes for the country to maintain Lady Hamilton's position in society "and they will give her an ample provision to maintain her rank in life". Nelson argues in the will about the diplomatic efforts of Lady Hamilton while wife of the British Envoy in Naples and her influence over the Queen of Naples which helped the British cause.

Sadly, despite Nelson's wishes, the state did not provide for Lady Hamilton after his death. She lived off the modest pension of her husband, Lord Hamilton for a time, but then ran deeply into debt maintaining the property previously acquired by Nelson and eventually died in poverty in Calais. 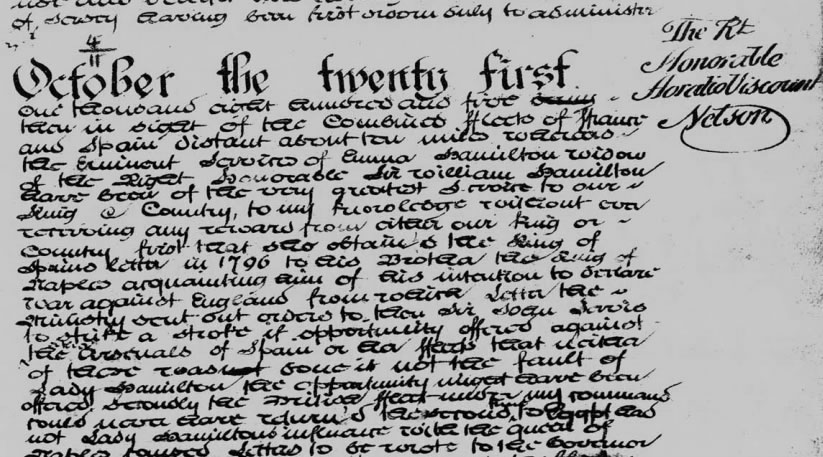