Lionel de Rothschild: "a banker by hobby - a gardener by profession"

Finding the more unusual details of an ancestor's life is possible with a bit of research, says Nick Thorne.

Lionel Nathan de Rothschild OBE was an English banker and a Conservative politician who was well known as the creator of Exbury Gardens near the New Forest in Hampshire. Born in London on 25 January 1882, he was the eldest of the three sons of Leopold de Rothschild (1845-1917) and Marie, nee Perugia (1862 - 1937), and a part of the illustrious Rothschild banking family. 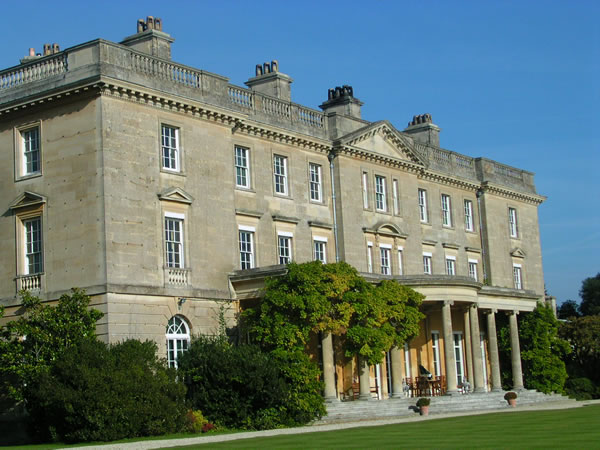 Using the birth, marriage and death records on The Genealogist, we can find Lionel Nathan de Rothschild's birth, which was registered in the district of St George, Hanover Square, London in the first quarter of 1882.

Turning next to The Genealogist's education records, we find an entry in the Harrow school register. This tells us that its pupil Lionel de Rothschild went on to Trinity College, Cambridge, before becoming a banker and MP for Aylesbury. It also states that he became a major in the Buckinghamshire Yeomanry, received an OBE in 1917 and served as a Justice of the Peace. It even gives the year of his death.

"As a Jew, he wouldn't swear the Christian oath, and was unable to take his seat"

In fact when on 25 January 1910, Lionel Nathan de Rothschild was elected to the House of Commons, he was following in his cousin's and his grandfathers footsteps. All three men had the first name Lionel - although his cousin was known as Walter. It was into Lionel Walter's shoes, as MP for Aylesbury, that Lionel Nathan stepped - he won the seat on his cousin's retirement from politics. The grandfather, Lionel de Rothschild, had paved the way for his grandson on being elected to parliament several times for the City of London. As a Jew, he wouldn't swear the Christian oath required at the time, and so was unable to take his seat. Eventually the oath was modified, and so he became the first practising Jew to take up his seat in the House of Commons.

Another educational record, this time for the Trinity College Admissions, reveals that the younger Lionel Nathan de Rothschild graduated from Cambridge with a BA in 1903, and a MA in 1908.

In 1912, The Genealogist's Overseas BMD records show us that Lionel married Marie Louise Eugenie Beer in Paris, The wedding was registered with the British Consul there. As with any ancestors in the Overseas BMDs, the references provided by these records make it possible to order a certificate from the GRO in Southport to glean further details. 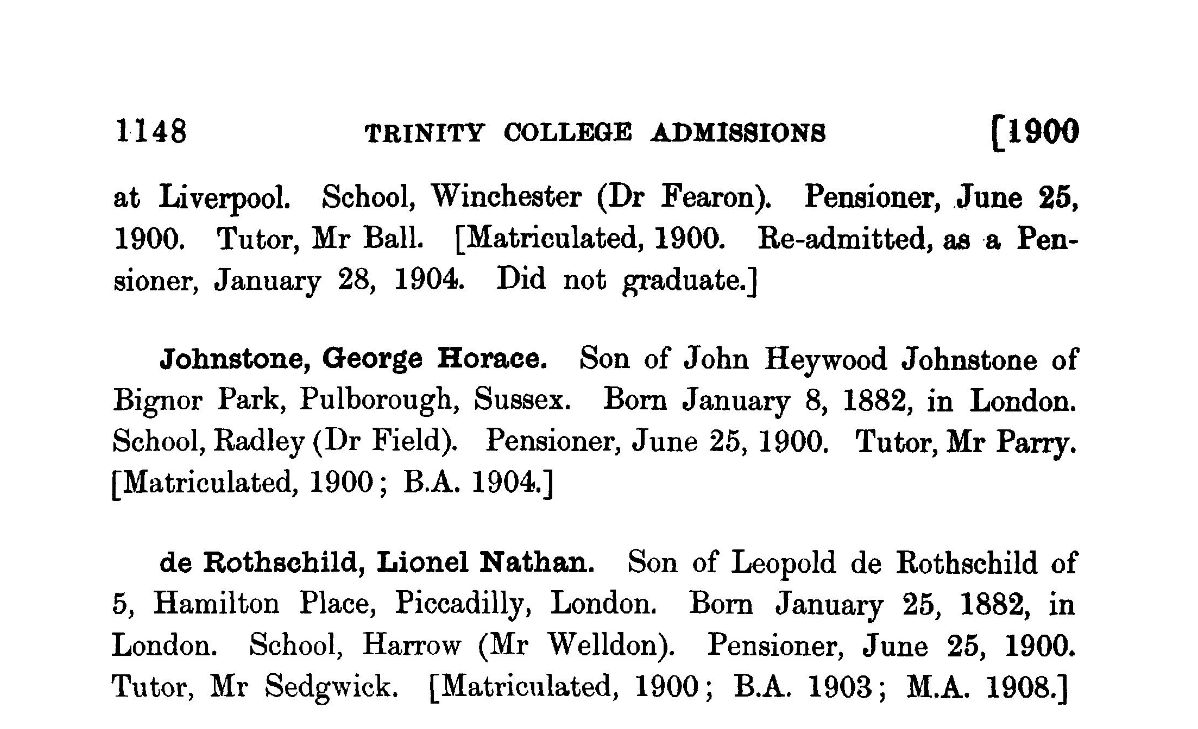 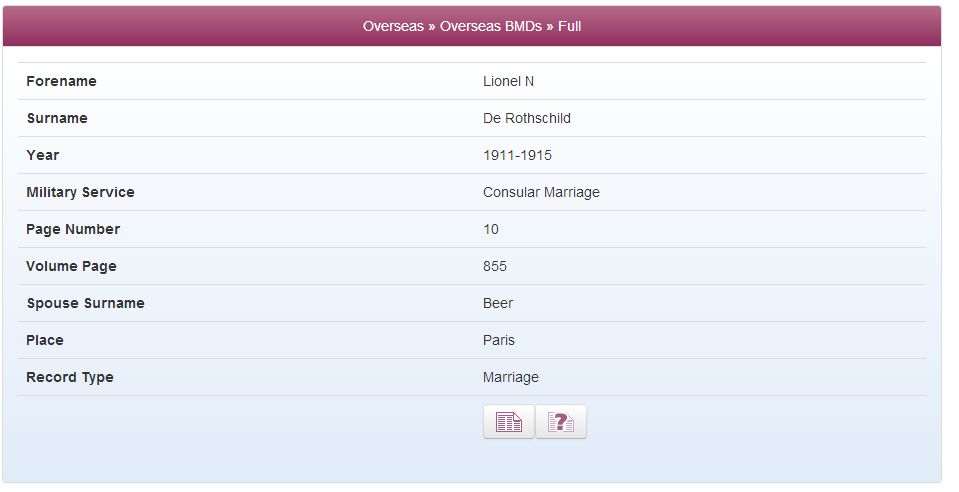 Find out about overseas marriages, such as Lionel's in Paris, with TheGenealogist

At the outbreak of World War 1, Lionel's younger brothers Evelyn and Anthony both joined the British Army. Lionel, however being the eldest son and heir, needed to take over the family's banking house- N M Rothschild & Sons. So, to his frustration, he had no choice but to remain at home, where he was employed, as a major in the Royal Buckinghamshire Yeomanry, on recruiting duties. Both of his brothers were wounded in battle, with Evelyn dying of injuries inflicted at the 1917 Battle of Mughar Ridge. A search of the military records on TheGenealogist reveals that Lionel de Rothschild nonetheless appears in the Roll of Honour for Cambridge University, and we can also find his World War 1 campaign medals on The Genealogist. 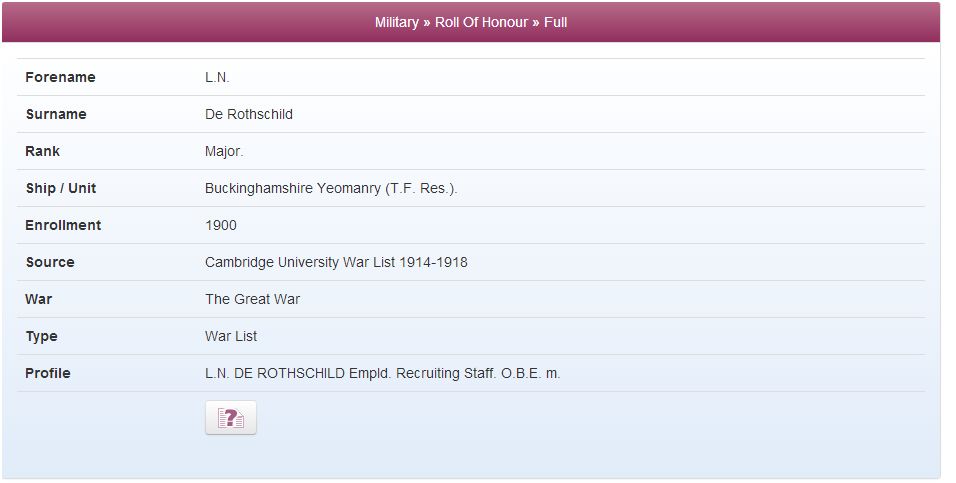 Lionel appears on his university's Roll of Honour, despite him not seeing active service in World War 1 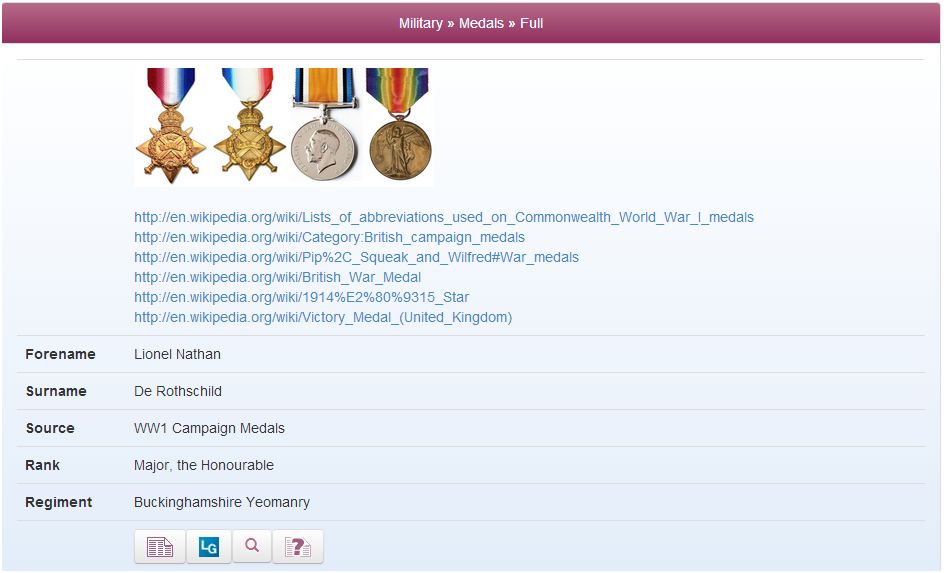 Lionel's father, Leopold, died in early 1917 and so Lionel and his brother Anthony became the managing partners of NM Rothschild & Sons. Lionel, though, had developed an interest in horticulture at a very young age, reputedly having planted his first garden at the age of five. In 1919, he purchased the Mitford estate at Exbury in Hampshire. Here he devoted a great deal of time and money transforming it into one of the finest gardens in England, with more than one million plants. In the 1920s, he went on to build Exbury House, around an existing structure, in a neo-Georgian style.

Lionel de Rothschild's horticultural interest saw him co-sponsoring plant-hunting expeditions to isolated areas of the world, such as the Himalayas, in order to collect seeds, for plant growth and experimentation. He developed 1,204 new hybrids of rhododendron and azalea, that were sold around the world. Despite continuing to work at the family bank, he described himself in a quote as "a banker by hobby - a gardener by profession." 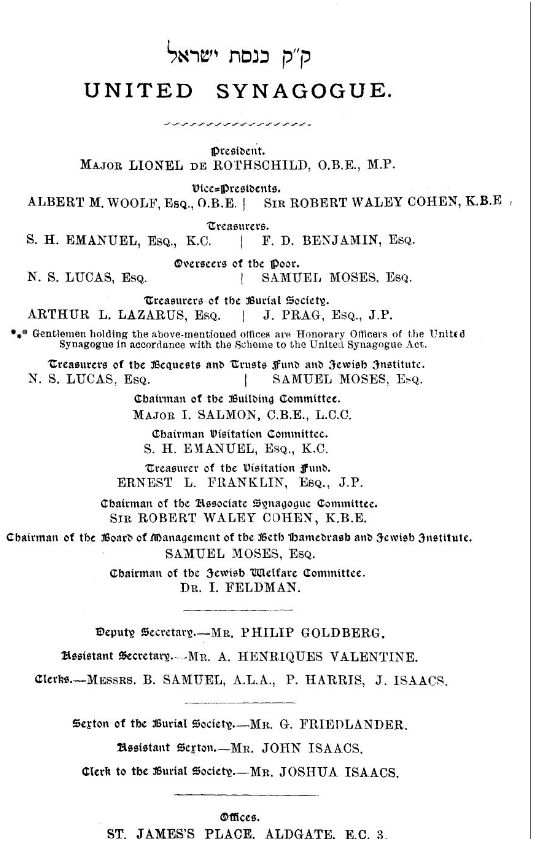 Lionel's name appears at the top of the United Synagogue records, as president

The newly released Jewish Synagogue Seatholder records on TheGenealogist allows those family history researchers with Jewish ancestors from London to find out more about their forebears. As to be expected of such an eminent member of society, Lionel de Rothschild is found several times within this collection.

These records show the positions held by members of 18 London synagogues, and span the years 1920 to 1939. Researchers who became wardens, council members, or served on committees of the synagogue, as well as the seatholders in synagogues from around the capital city.. The fully indexed records are searchable by name, keyword, synagogue and address with one click we can see an image of the page from the Seatholders for Synagogues in London.

"The Genealogist's resources enable the researcher to trace lives from birth, to school, university and later life"

Selecting 'miscellaneous records' and then Jewish Synagogue Seatholders' from the dropdown menu, we enter Lionel as a forename and de Rothschild held in three different synagogues. We can see that he was the Warden of the Great Synagogue. This stood in Duke's Place, north of Aldgate, although the building was unfortunately destroyed during the Blitz. We also find that de Rothschild was president of the United Synagogue in North Finchley. Selecting that record allows us to view the actual image of the page taken from the Seatholders for Synagogues in London in 1920.

Lionel Nathan de Rothschild died in London, aged 60, in 1942, and was buried in Willesden Jewish Cemetery - his death record can be found on The Genealogist. His son Edmund assumed the management of Exbury Gardens, and went on to establish a charitable trust to manage the property. In 2001, the American Rhododendron posthumously bestowed a Pioneer Achievement Award on Lionel Nathan de Rothschild, in recognition of his contribution to this area of horticulture.

As can be seen from the example of Lionel de Rothschild. TheGenealogist's resources enable the researcher to trace lives from birth, to school, university and later life.