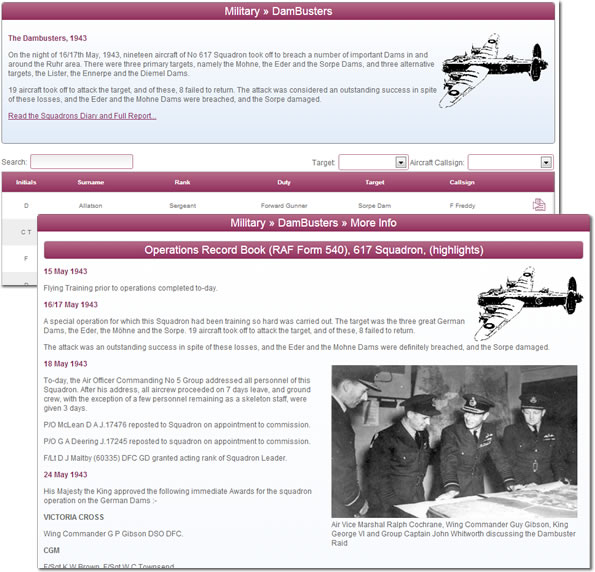 Flight lieutenant Joe McCarthy's crew used the call sign 'T for Tommy' - their target was the Sorpe dam. TheGenealogist's digitised Operations Record Book shows the details of the crew all together. The complete No 617 Squadron data set can be filtered by name, dam target and aircraft call sign can be viewed with a Diamond subscription at TheGenealogist.co.uk.

Of the men in this particular crew, 'Big Joe' McCarthy - an American in the Royal Canadian Air Force - was awarded the Distinguished Service Cross and Sergeant Johnson the Distinguished Flying Medal. All of the awards - including the Victoria Cross to Wing Commander Guy Gibson (who died later in the war) - were made on 24 May by immediate approval from King George VI.

The Operations Record Book also provides details of the specific sorties. In the case of the Tommy raid on the Sorpe dam (which was not fully breached) it reports: "Had trouble with [the] compass and took off 20 mins late. Flew route in reverse direction as a consequence. Had difficulty finding lake due to mist, and on locating it, found the run along the dam was made very difficult by the presence of a small hill at either end. The mine was dropped and seen to explode in contact with the dam. Part of the crest of the dam was seen to crumble."