A common brickwall is when our forebears don't neatly get married where we expect them to. As family researchers we may have had the preconception that our ancestors would surely have got married at the bride's parish church? Well that, it seems, was not always the case!

When we can't find a person where we had expected them to discover them, it can be a bit of a puzzle. While it is certainly true that many of our forebears will have returned to the bride's home town to wed, that is not always what happened. Some of our ancestors may have been Nonconformists, belonging to a church other than the Church of England, while others married irregularly (away from the home parish of either of the spouses) or even clandestinely (taking place away from the home parishes and also without banns or a license).

Before 1754 it is often worth looking for missing ancestors in London marriage records and especially in those for the area around the King's Bench Prison, the Mint, the May Fair Chapel and most notably The Fleet Prison. The Fleet was the location of many impoverished clergymen resident at the debtors' prison of the same name. It is thought that in the 1740's half of all the marriages in London took place in unlicensed chapels or taverns in the streets in the streets surrounding these debtors' prisons and, from our point of view, most importantly not all of these people would have been from the capital.

All classes of society were drawn to the Fleet to get married in haste, or what at a more reasonable cost than if they were to adhere to the normal requirements in their Church of England parish church. Since 1695, in order to marry at the local Anglican church, there had been a need to publish banns at both the bride and groom's parish churches on three Sundays prior to the wedding, or to apply for a license o marry. Apprentices, who were not allowed by the terms of their apprenticeships to marry, would often turn to the unregulated Fleet to tie the knot.

Marriages in England, at that time, actually didn't even have to take place inn a church to be legal and as concern grew about the number of irregular marriages and clandestine marriages taking place, Parliament passed Lord Hardwicke's Marriage Act of 1754 to close off this route.

All types of people from the top to the lower end of society were married around the Fleet prison and, luckily for family historians, we can easily search these non-parochial records on TheGenealogist, which has digitised The National Archives' RG7 collection. This covers the Fleet, The King's Bench Prison, the Mint and the May Fair Chapel.

Among the various aristocrats who made use of the Fleet to marry we can find Lord Abergavenny and Catherine Tatton. Using the search page on TheGenealogist we choose 'Births, Marriages and Deaths' and select 'BMD Registers'. Entering our ancestor's name and then form the drop-down menu for 'Search Within' we select: 'RG7: Fleet Marriages 1667-1777'. 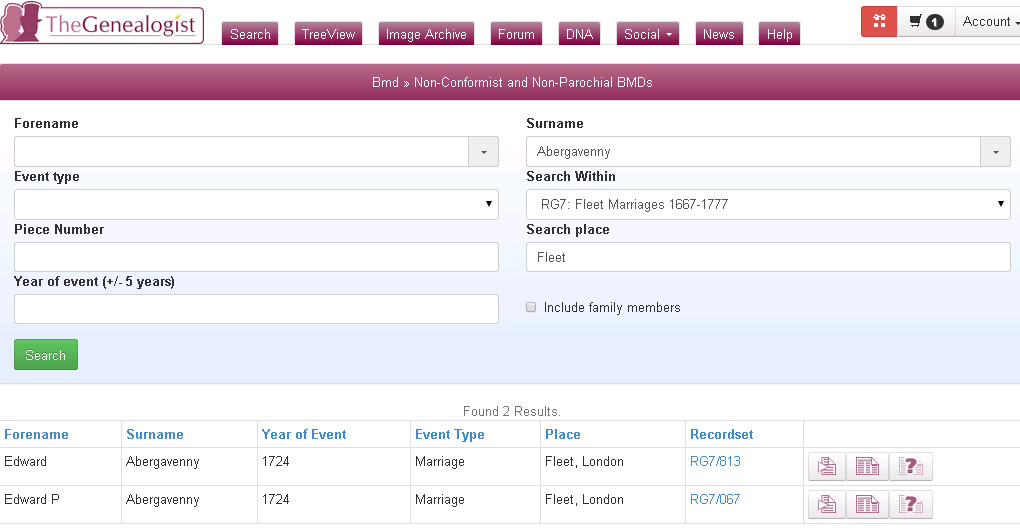 Search the Fleet marriages 1667-1777 on TheGenealogist.co.uk for people from all walks of life. Seen here is the entry for Lord Abergavenny and Catherina Tatton.

We can often find two records for each marriage. The 'Chapel', which may have been no more than a room in a tavern within the environs of the debtors' prison, may have kept a register and the clergyman who performed the ceremony could also have kept his own note book. 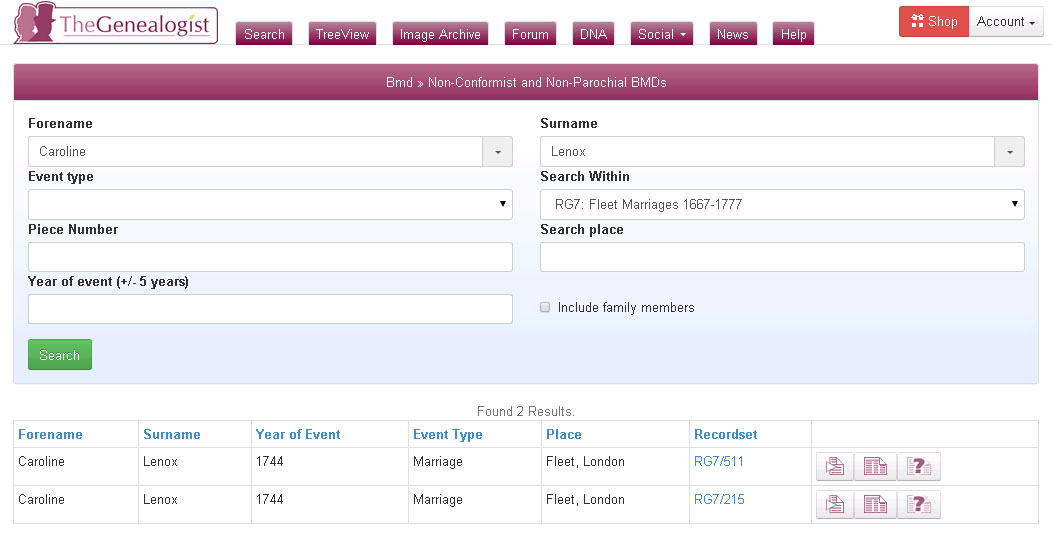 Sometimes searches will reveal two entries – one from the clergyman's notebook (left) and from the register (right) – as for the marriage of Henry Fox and Lady Caroline Lennox.

Above we can see the marriage of the Whig politician, Henry Fox MP, and Lady Caroline Lennox, who married without her parent's permission in 1744. The groom was the son of Sir Stephen Fox, the politician, and despite belonging to the same party as William Pitt the Elder, he and Pitt were bitter politician rivals. Fox clandestinely wed the much younger Lady Caroline Lennox in a Fleet marriage when the bride's father, His Grace the Duke of Richmond, refused his daughter's hand to Fox. The couple's elopement and marriage resulted in Lady Caroline being cut out of her parent's will as a punishment.

In the next decade Henry Fox, as a member of the House of Commons, was to become a fierce opponent of Lord Hardwicke's Marriage Act – legislation designed, as it was, to control the type of marriage ceremony that he and Lady Caroline had received.

Some Fleet marriages were not just chosen for the convenience, but also to conceal something.

As an example of some skulduggery, in the Fleet registers, we can find the case of Benjamin Richards and Judith Lance. They were married at the Bull & Garter on 5 November 1742 and appear in the notebook of marriages for one date and in a register for another. 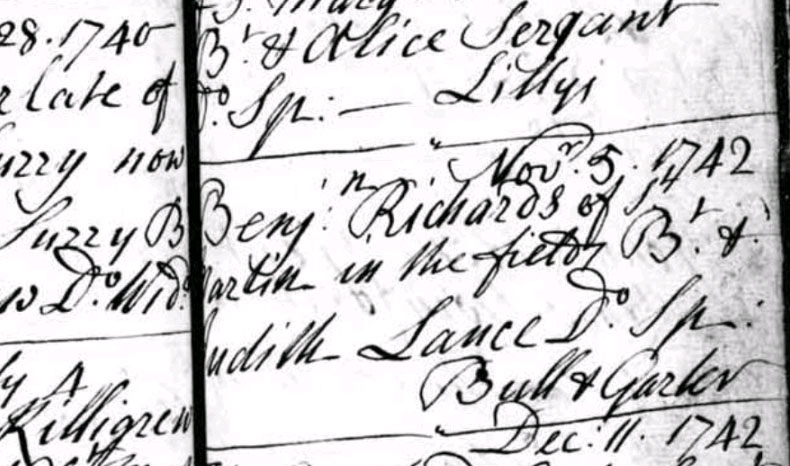 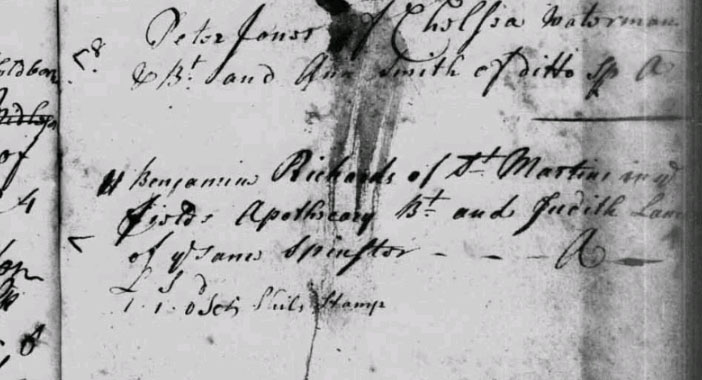 Searches sometimes show duplicitous intent. There are two marriages recorded for Benjamin Richards and Judith Lance, on 5 November 1742 and the other on 11 March 1741/2.

Reports at the time show that the couple passed the clergyman a guinea (£1 1s 0d) and asked for the marriage to be backdated. Their disgraced churchman seems to have obliged as we are able to find them in another record of a Fleet register, to be found on TheGenealogist, where we see the same Benjamin Richards and Judith Lance again, but this time recorded as married on the 11 March 1741/2, rather than 5 November, and with a sum of £1 1s 0d noted below the entry!

The Fleet marriages are just one type of the non-parochial and Nonconformist records of marriages that you can access on TheGenealogist. Together with the many other parish records and BMD data on TheGenealogist, this makes it an excellent place to search for your ancestor's marriage.