A ‘Greatorex’ by any other name…

Researching a family with an unusual name can often be daunting – especially when that name has numerous different spellings and the family moved around a great deal.

Enormous problems faced me when tracing the family of my paternal grandmother when I set about the task in the 1970s and 1980s. At one point I discovered a newspaper cutting in a great uncle’s collection which suggested that the family – usually Greatorex by name – had lived in the Derbyshire village of Alvaston for 400 years. Since the cutting was from 1888, this took me back to the early days of the Tudors and surviving parish records showed this to be very much the case.

The problem was that my direct ancestor Thomas Greatorex, born 1832, upped sticks and left Alvaston in the 1850s and was to be found in five different places around England at the time of the following five censuses. Finding his whereabouts took me years and a great deal of travel. With modern researchers in mind, I decided to turn to the tried and tested Keyword, Family Forename and Address search tools of TheGenealogist to see if the task would be any easier with recent developments in online technology.

Before testing my theory, I had to dwell on a couple of problems shared by many fellow researchers. Although all my grandmother’s registration certificates have her named clearly as Greatorex, there are numerous ways of spelling this surname, the most common being Greaterex, Greatrex, Grettrix, Gretrix, Gratrix, Gratrex and even Greatrakes. Would the Phonetic search engine on TheGenealogist be able to cope with this without returning hundreds of unrelated results? 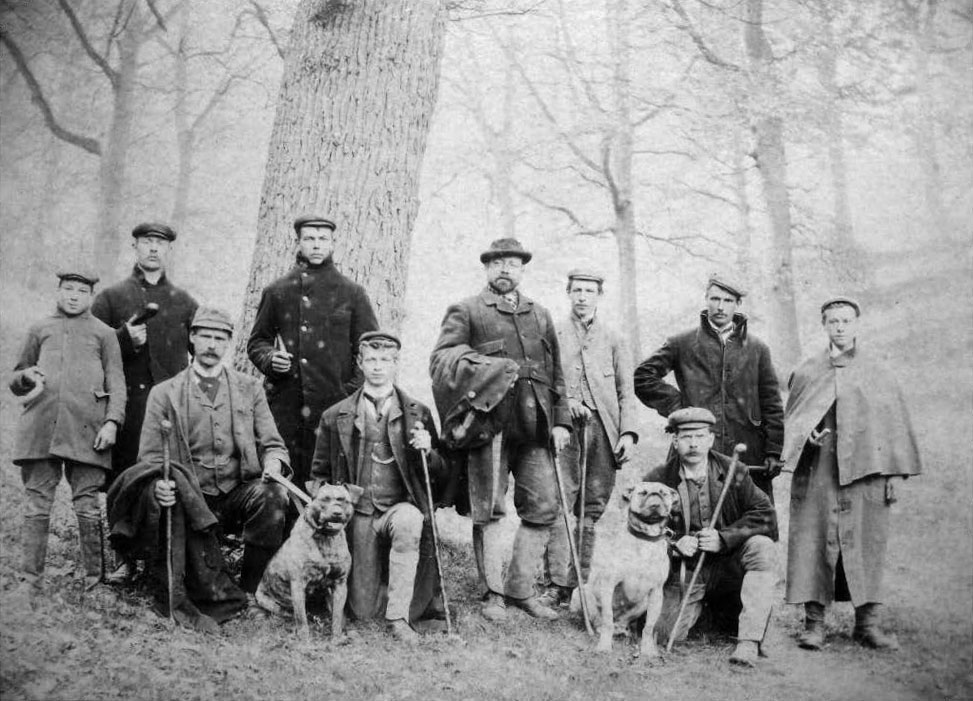 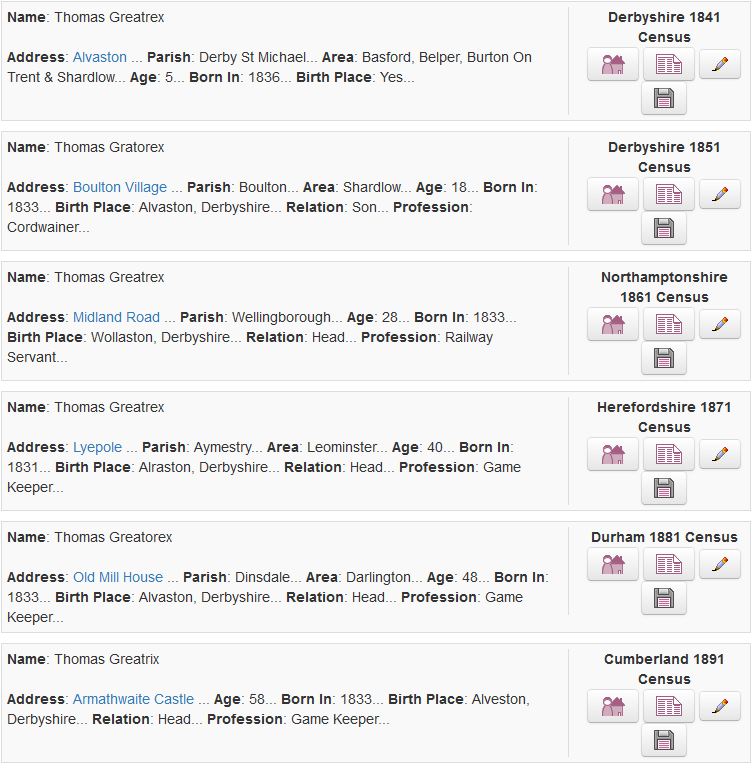 TheGenealogist's search results for Thomas Greatorex in the censuses, showing how the site cleverly picks up variant spellings of his name 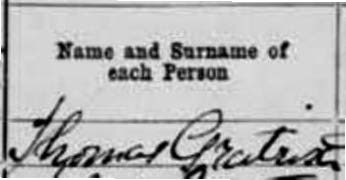 How different enumerators wrote down Thomas’s name, as revealed in the original census images 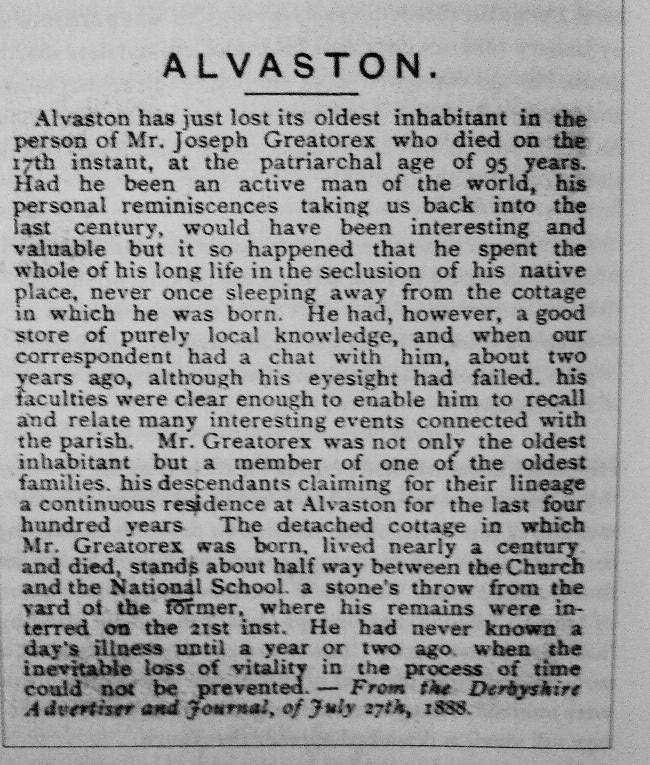 I, like many other researchers, have to make some allowance for the mistakes that crept into the count at the time of gathering the data as it is not difficult to imagine the problems the enumerators encountered when coming face to face with ‘incomers’ who could be illiterate and/or difficult to understand simply because their accents were different. In many cases enumerators must have had to write down names phonetically and many of them were ill-equipped themselves when it came to literacy.

The modern indexers’ task is equally difficult. We family historians are all too familiar with our own family surnames and Christian names; while indexers will try their best to transcribe what they see before them. The question was whether TheGenealogist's search tools would be able to cope with this problem and find my ancestors.

Thomas Greatorex was born and baptised in Alvaston in 1832 and returned to another part of his native county before his death at Fairfield. Buxton, in December 1910. I thus put Thomas (Forename) Greatorex (surname) into the search engine and nominated ‘all records’ within the dates 1832 +/– 5 (to cover the wide age range nominated in the 1841 census). ‘Derbyshire’ was entered as the first ‘keyword’ and this got 26 hits. The census returns that I knew to be correct all turned up early in the hits and show a variety of different surname spellings. 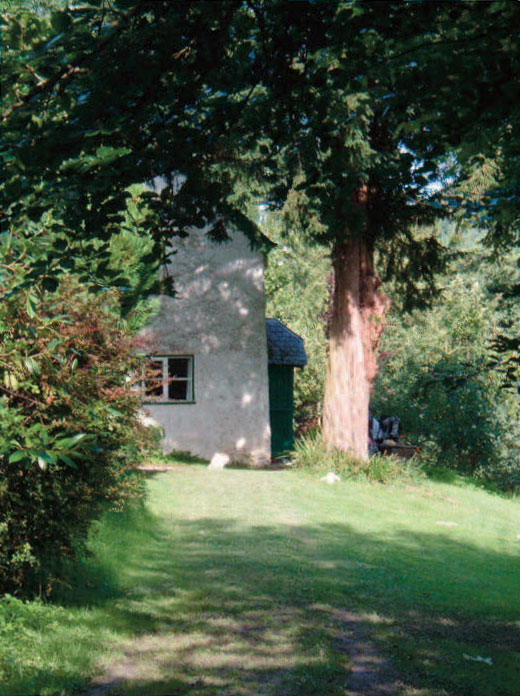 The search engine had clearly worked and a closer examination of the digitised entries in date order shows the kind of problems it had managed to overcome.

In 1841, Thomas (written down by the enumerator as five years old when he was actually eight or nine) was with his stepmother Hannah and his agricultural labourer father in Alvaston village on the outskirts of Derby. Ten years later – and in the same house with his parents – he is now 18 and a ‘cordwainer’ or shoemaker.

By 1861, Thomas had married and moved to Wellingborough in Northampton where he was a ‘Railway servant’ living in a Midland railway house near the station. He and his wife, Selena, have four children and his name, recorded as ‘Greatrex’, is really difficult to read on the image and to an untrained eye could look like ‘Greatnex’ or ‘Greatnix’. Ten years later he was a gamekeeper living in a riverside cottage in Herefordshire and with a surname which, from a look at the image could so easily have been transcribed as ‘Gualnex’; the transcriber has, however, chosen to write it as Greatrex.

By 1881 he was still a gamekeeper and living in a cottage on the Durham/Yorkshire border. The enumerator had a lovely hand and the name Greatorex is clear to all. His son Daniel (my great grandfather) is working with him and learning the trade.

A decade on and Thomas is in Armathwaite Castle in the Eden Valley in Cumberland (a grand sounding name for a riverside hunting lodge). He is still a gamekeeper, and close examination of what the enumerator had written for my ancestor’s surname is open to some interpretation. By 1901 he was back in Derbyshire, north of his native home but close to the birthplace of his wife. Once more a gamekeeper by profession, his surname is clearly spelt ‘Gratrix’ in the original document.

Unfortunately he did not survive to fill in the 1911 census. Presuming that he was literate, it would have been interesting to see how he spelt his family name himself.

So TheGenealogist, with its powerful phonetic search engine, had coped with all the problems thrust upon it while being refined enough not to baffle with too many irrelevant results. Within seconds, of using it, I was party to a set of information which had cost me time and money all those years ago. Not that I am bitter – that time and money was put to good mind-stretching purpose and might otherwise been spent in some north-eastern public house!