A man of his word (and other brave fellows)

Most of us have ancestors who had some form of military involvement and with the centenary of World War One our interest has spiked. Researching ancestors who were involved in this particular conflict can be revealing. This article will show you how easy it is to find out more about the military careers of our ancestors. I recently came across the remarkable story of wartime soldier Captain Robert Colin Campbell of the East Surrey Regiment. I turned to TheGenealogist's Master Search to find out more. Entering his name and the keywords ‘East Surrey Regiment’ came up with a variety of results. From the numerous Army Lists available on TheGenealogist.co.uk, I discovered that Campbell reached the rank of captain in the regular East Surrey Regiment (1st Battalion) on 28 April 1913, having been first appointed 2nd Lieutenant on 28th Nov 1901 and Lieutenant on 30 April 1906. His name continues to appear on these lists from the outbreak of war in 1914 until the 1920s. His medal record tells us that he was part of the British Expeditionary Force that headed across the channel to defend France and Belgium within a fortnight of the conflict breaking out. Involvement at the sharp end of things in 1914 and 1915 was noted regularly on medal cards as this led to much-valued medals of service other than the two more general service medals awarded. Looking back at the results for Captain Campbell on TheGenealogist we find five particularly intriguing entries in the Prisoners of War collection. Made into a narrative, they show us that he was officially posted missing and unofficially stated to be a prisoner of war in October 1914. The date given for his possible capture, however, was 24 August 1914 – just a couple of weeks after landing on the continent. A few days after speculating as to his captivity, it was confirmed that he was indeed a prisoner of war.

Moving on more than four years, we come across details of his release. Two later entries in the same Prisoners of War series, with the dates 28 November 1918 and 1 September 1919, show that he was released and returned to England soon after the end of the conflict and that it was later recognised (in 1919) that he had been wounded at the time of capture. In relation to these and other military records, it is interesting and informative to note how long it took for details of events such as capture, wounding, death and promotion to be officially posted for all to see (it would usually take four weeks or more for the reports to come back from the front line and be published).

Captain Campbell’s wartime career may at first glance appear unfortunate but fairly straightforward, yet there is a ‘fly in the ointment’. His prisoner of war record tells us that he was indeed released from captivity, but also references something to do with Holland and a captivity which had only started in 1917! Further research by historian Richard Van Emden revealed the full story. Captain Campbell was the only known British captive to be allowed to return home as long as he gave his word that he would come back to captivity after two weeks’ leave. He had received news that his elderly mother was dying and had written to the Kaiser asking for permission to go to see her on the understanding that he would come back. This took place in November 1916 and, after a week at her bedside, he returned, travelling through the Netherlands. Campbell kept his promise to the Kaiser, but did try to escape after his return to prison camp (as was the unwritten duty of captured officers). He remained in the army until 1925 and died in 1966. 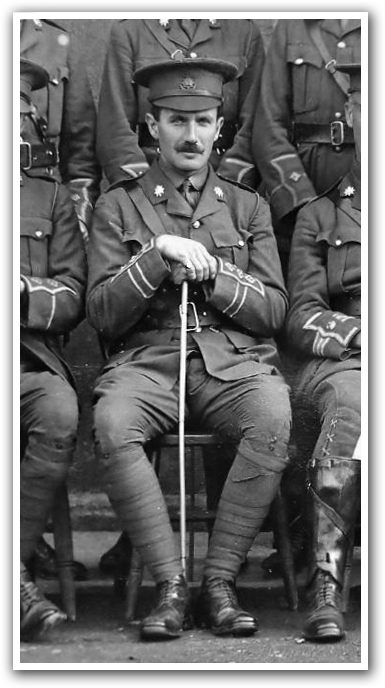 TheGenealogist provides access to the largest collection of Military Lists available online. These rare and invaluable lists run from the 17th century onwards and include Army Lists, Navy Lists, Air Force Lists and Militia Rolls and Musters. The indexing of the Army Lists allows researchers to follow the careers of officers both full and part time in some detail and sometimes from the late 18th century onwards. For example when dealing with a WW1 officer one might think it enough to look at 1916 +/- say five years. Moving that to +/- 40 years can bring really fruitful results showing, for example how an older and senior officer in the war may have come through the ranks of part-time militia and early territorial organisations. The Vaux brewing family of Sunderland provides such a case in question and an interesting exercise is to place Vaux in the surname search field, Durham as the keyword and 1916 as ‘Year of event’, +/- 40 years, to discover the military contributions of Edwin, Edward and Cuthbert Vaux from the mid-Victorian period to the end of World War One and beyond. 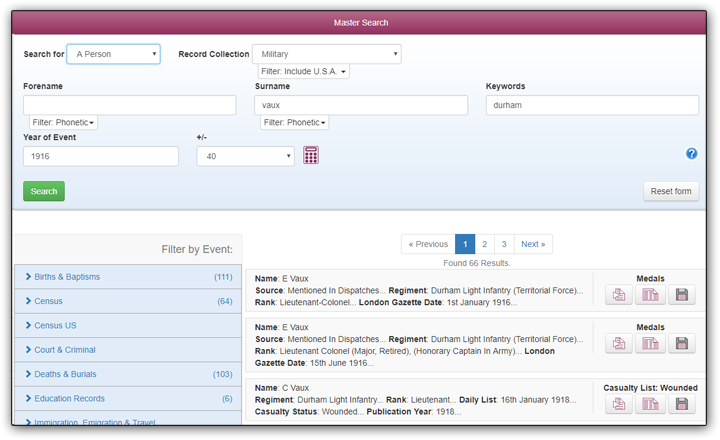 Casualties of the war

Captain Campbell survived the war, many didn’t and there are a number of record sets on TheGenealogist which can help us find out more about those who died in World War One. My wife’s great uncle Ernest Bridge, son of a village shopkeeper in the Essex village of Roxwell, was known to have perished in the conflict and TheGenealogist came up with the details. The record set titled ‘Soldiers Who Died in the First World War’ is very handy as it often gives the place of birth/enlistment along with the date and place of death. I also knew that his brother Norman died later in the war and that his body was never found. The ‘Memorial’ link shows us that he was a private (no 202113) in the 2nd Battalion the Essex Regiment, that he died on 24 April 1918 at the age of 20 and was the son of ‘Mr and Mrs F J Bridge, Roxwell, Chelmsford, Essex’. We were also informed that this information was taken from Great War Memorial Register 19, Loos Memorial.

In addition my wife has a memorial plaque or ‘dead man’s penny’ for a great uncle on the other side of her family. His name was Cyril Bohannon Monk and the ‘Casualty List: Killed’ record tells us that he was born in Good Easter, the parish adjoining Roxwell. It reveals that he had served in the Bedfordshire Regiment (no 10912) and then the 10th Battalion of the Essex Regiment (no 42960). He died in ‘France and Flanders’ on 26 April 1918.

There are a number of useful research points to be drawn from these three family cases. In each case, the records provide individual service numbers which can help us to discover other wartime records relating to that individual. Details of age and parentage help us confirm that we have the right person. It is also worth noting that TheGenealogist's Memorial Records also lead to information from memorials at Vien-Artois, Arras, Le Touret and Pozières – all in France. As a footnote, it may not have escaped notice that two of my wife’s ancestors were killed within days of each other in April 1918. Readers may well come across wounding, death and captivity in March and April 1918 as the ‘final German push’ caused a devastation in the allied ranks in many respects matching the tragedies of Gallipoli and the Somme.

Still referencing those who died in the war, the ‘Rolls of Honour’ record set can come up with massively detailed and useful information. This collection includes a number of different contemporary rolls some of which were funded privately – usually by members of the deceased’s family. For example, Arnold Barker, one of three sporting brothers who lost their lives in the war, is found in ‘De Ruvigny’s Roll of Honour’ (see picture, right) – one of the most informative rolls that are available. The Casualty list collection on TheGenealogist is a fantastic resource – over 1.6 million British servicemen were injured in WW1, meaning you are often able to find a relative listed. It also enables us to trace the history of someone through WW1, if they were unfortunate enough to have been wounded. In theses records I found the former British Prime Minister, Conservative politician and publisher, Harold Macmillan. In September 1915 the young Lieutenant Macmillan, while fighting with The Grenadier Guards at the Battle of Loos, was shot in the hand and received a glancing bullet wound to the head requiring him to be hospitalised back in Britain. 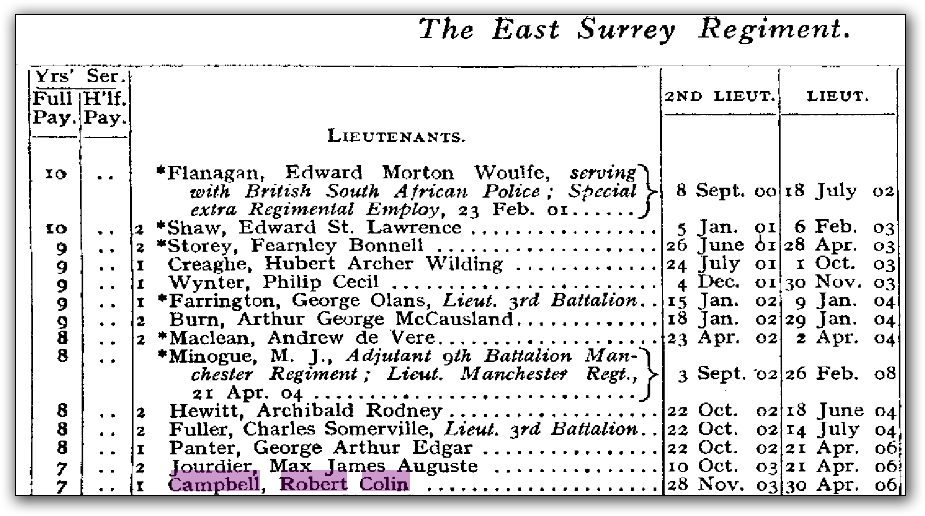 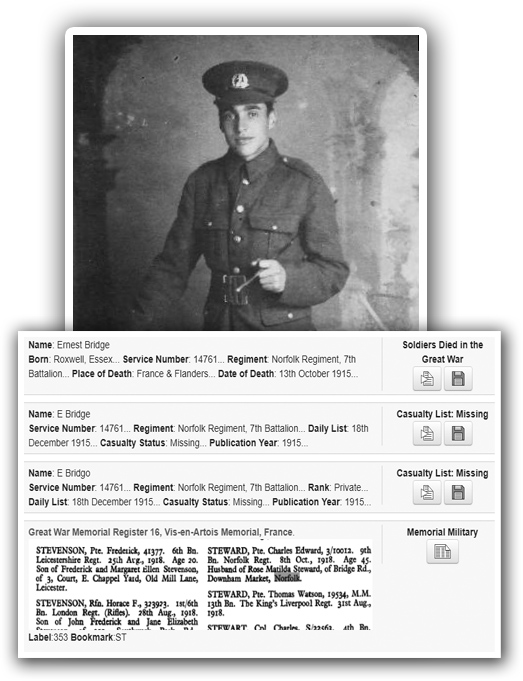 Ernest Bridge and his results at TheGenealogist

After recuperating, he returned to the front lines in mid-1916 in preparation for the Battle of the Somme. Leading an advance platoon, he was severely wounded and spent an entire day lying in a trench with a bullet in his pelvis. Macmillan spent the final two years of the war in hospital undergoing a long series of operations. He was left with a limp for the rest of his life and never regained full mobility of his hand from his first wounding. The medals index, already mentioned, has other uses and leads to those awarded medals for acts of gallantry and good service such as the Distinguished Conduct Medals and Military Medals and also, significantly, those Mentioned in Dispatches in the war. My local sports club history from the 1960s gives a simple list of the men who fit into this category and the following two examples show how such basic information can be followed up on the site:

Gelsthorpe was a county rugby player who later became a bishop in Africa! In light of national and international interest in the various WW1 centenaries, it is natural that we researchers tend to channel our efforts into researching this period. However it is worth noting that the TheGenealogist offers access to records covering a much greater period than 1914 to 1918 and useful time can be spent trawling through these indexes. They lead to military records stretching from the late 17th century well into the 20th century. Just recently, while preparing a talk on my Black Country ancestry (which I have established deep into the 18th century), I decided to have a look at the 18th century muster records available on the Genealogist site. Throughout the 18th and 19th centuries I had ancestors and ancestral siblings with the fairly unusual names of Samuel and Benjamin Willetts living in and around Dudley/Netherton in Worcestershire. The Muster Rolls index for 1781/2 covering the whole country threw up only four Willetts/Willits – including a Benjamin and Samuel from Worcestershire!