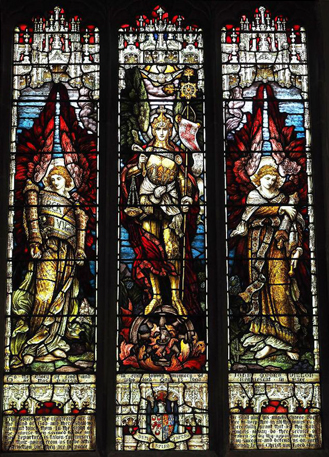 Who was the elusive Frederick Sydney Eden? At first glance he was just an author/artist specialising in the study of stained glass church windows. In the middle part of the 20th century F.S. Eden was indeed carving a niche for himself as an author and illustrator of books on stained glass. Though he was becoming well known for his many submitted articles to magazines such as The Connoisseur, Apollo, Country Life, and The Burlington Magazine on his specialist subject, anyone who tries to trace Mr Eden before this period finds an intriguing blank in the records. A man who seems to have no past!

Searching for him in the early 20th century and we can have some luck. We are able to discover Mr Eden in the 1911 census on TheGenealogist where the ‘author and decorative artist’ is found to be living in Essex at the time. It is believed that he had first become interested in this art form around 1909 when he began to explore the churches of Essex and by the year 1911, when the census was taken, he had completed his study of the western part of the county and was now working on a voluntary basis for the Royal Commission on the Historical Monuments of England (RCHME).

We can also find his death in 1950 at the respectable age of 91, recorded at Aldershot in Hampshire. This suggests that he was born in 1859 and so when he became interested in stained glass, a subject that he would become an authority on, he would have been around 50 years of age. So what had he been doing for half a century to not appear in the usual family history records?

A search for the birth of Frederick Sydney Eden in 1859 returns a handful of matches with the same first and surname, but none of which we can confidently point to as being the correct Frederick Eden. As it will turn out, none of them are in fact the artist and author.

The 1911 census gives us a huge clue as to why this is so – along with some of his children, his sister Rosa is listed as living with him. Frederick and Rosa are a year apart in age and both were born in Islington but while Frederick’s children have the same surname as their father, their aunt does not. She is Rosa Suzanne Waddington. We can see from the census record on TheGenealogist that Rosa is single, pointing to this being her surname at birth and not a name that she had acquired later. If that is the case, then why is her brother named Eden? A search for Rosa in the earlier census records finds her and one Frederick S Waddington in the 1881 census for Hackney. Could this be our difficult-to-find man?

Looking for more information that would back up our theory as to where the stained glass expert named Eden had sprung from, a further search finds an online magazine by the name of Vidimus (https://vidimus.org) dedicated to medieval stained glass. In issue 53 the publication reviews an edition of the British Society of Master Glass Painters’ Journal of Stained Glass Vol. XXXIV (2010). What is of interest to us is that, among the other articles published in this periodical, Hugh Murray looked into the life of our curious Mr F. S. Eden. Murray was a Yorkshire historian who married Jill Batey, the granddaughter of John Ward Knowles, who had been a prominent York stained glass manufacturer of the late 19th and early 20th century and so would have known Eden’s work. After cataloguing publications that Eden had written and revealing that he had existed in a hand-to-mouth fashion as a poorly paid artist, Murray then discloses that he had found out that the impoverished F.S. Eden and Fredrick Sydney Waddington were one and the same person and reveals more about the man’s former life. This adds weight to what we had surmised from the evidence in the 1911 census. Frederick Eden had been born with the name Waddington.

Changed his name after committing fraud

Frederick Sydney Waddington was a struck-off solicitor who had changed his surname to Eden after having committed the crime of fraud and then spending six years in prison. With this lead we are now able to draw together some records from TheGenealogist’s collections for our man, starting with his birth in Islington, and then find him in several other documents, including the fascinating Court & Criminal records.

The 1881 census, in which we have already found Frederick and Rosa, includes their parents at the address of 16 Clapton Square. Here Frederick is a 22-year-old law student living in his father’s household. Frederick E. Waddington, the father of Frederick Jr and Rosa, is a wholesale umbrella manufacturer; carrying out a search for this gentleman in TheGenealogist’s records, together with the address in Clapton Square, reveals to us that the initial E in the census stands for a middle name of Eden – the very name that our stained glass expert and his children were to use in 1911.

The record that pointed us in this direction is The Register of Persons Entitled to Vote for Members of Parliament in the City of London as Freemen 1877 where Mr Frederick Eden Waddington is listed as a voter, having a warehouse in Coleman Street and a home address at 16 Clapton Square. Now that we appear to be successfully on the trail of the correct family, it is then possible for us to follow Frederick Eden Waddington back to the 1851 census and to find that his parents were James and Mary Ann Waddington. This census shows us that James was also an umbrella manufacturer. James Waddington and Mary Ann gave several of their children the middle name of Eden, including Frederick Snr, the father of our law student. This strongly suggests that it may be Mary Ann’s maiden name; an assumption that turns out to be correct and so we can presume that a disgraced Frederick Sydney Waddington took his paternal grandmother’s name when he wanted to make a fresh start after his conviction and release from prison.

Moving forward to the 1891 census, our solicitor can be found living with a wife and two children. His wife at this time was Mary H. Waddington, born in Rode, Cheshire and so we can use TheGenealogist to look for a marriage between the two census years. A search, however, of the marriage records discovers that he had married twice in the 1880s. Firstly in 1884 to a lady by the name of Emily de Renzi and then a further entry is shown four years later in 1888 when he marries Mary Hordley Warham. This raises the question of what happened to Emily. If we turn to the statutory death records on TheGenealogist the answer is revealed – Emily Waddington had died in Brentford, aged 28, in 1887. The very next year our solicitor married Mary. 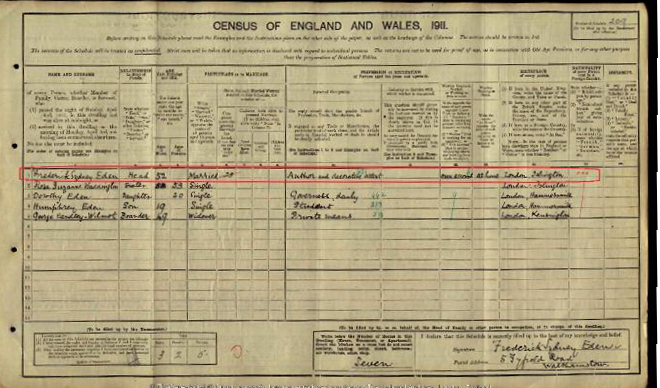 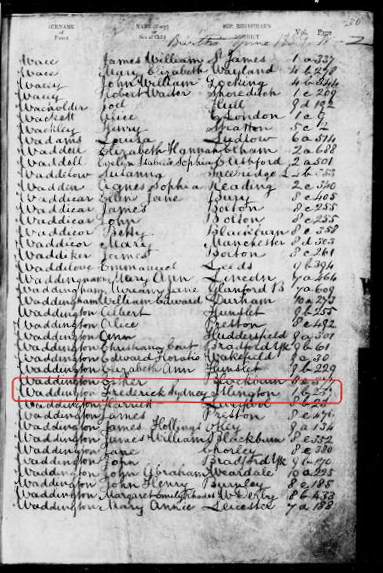 Birth record for Frederick Sydney Waddington 1859 in Islington on TheGenealogist

Pentonville and the chaplain’s daughter

It transpires, from looking at the first marriage, that Emily de Renzi had been a resident at the time of her marriage in one of the buildings at Pentonville Prison, as the daughter of the Rev George Binks de Renzi. The de Renzis lived at the chaplain’s house at the institution and Emily had been recorded in the 1881 census as a teacher. She and Frederick were married, not by her father, but by her clergyman brother, the Rev George Castriot de Renzi, who we can find in the Clergy List on TheGenealogist.

As a lawyer, Frederick may have seemed a good prospect to the family and through her untimely death Emily was spared the ignominious prospect of becoming a convict’s wife after once being a prison chaplain’s daughter. Not so for his second wife, Mary, who in the 1881 census before her marriage had been recorded as a ‘governess to a private family’ and by 1901, now married to Frederick, was living in Isleworth as a ‘monthly nurse’ under the name Dorothea M.H. Waddington. At this time the daughters of the marriage were with the Waddington grandparents and Humphrey, a son born in 1892, was at Fortescue House, a boys’ home and refuge in Brentford – meanwhile Frederick was serving his time in Parkhurst.

The fall of the respectable solicitor began with his practice being subject to a bankruptcy action. By referring to the Insolvents and Bankrupts records on TheGenealogist we find that Waddington F.S. of 33 Broadway, Hammersmith, solicitor is the defendant in the Perry’s Gazette for July 1891.

Frederick Waddington also appeared in the London Gazette when in April 1898 his receiving order was recorded before the High Court of Justice in Bankruptcy. It was while this bankruptcy was being investigated that a fraud came to light. It emerged that Waddington, in the role of attorney, had been entrusted by a lady named Mary Ann Wassall a sum of money with instructions on how to apply the funds. On the lady’s death, where Waddington was named as the sole executor of her estate, he duly processed the estate but omitted to include the amount that he had earlier been given to deal with on his client’s behalf. Unsurprisingly, Waddington was struck off as a solicitor and went to trial at the Central Criminal Court, along with his partner George Cheesman. Both men can be found in the Court and Criminal records on TheGenealogist where we read about their crime and see that Waddington was sentenced to six years’ penal servitude and imprisoned at Parkhurst on the Isle of Wight.

A search of the 1901 census records finds him a prisoner in that institution where his relationship to the head of the family, or position in the institution is listed simply as ‘convict’. The next record that we can find him in is the MEPO 6 Metropolitan Police: Habitual Criminals Register 1904, again in the Court and Criminal records at TheGenealogist. This was a record generated when someone was being released so that the police would be aware of previous offenders. It furnished a description of the released prisoner and so, all these years later, we can tell that Frederick Waddington aka Eden was just 5 foot 4 and a half inches tall. We know that he had brown hair, blue eyes and a fresh complexion and as identifying marks he is recorded as having had scars on some of his fingers and under his chin.

The mysterious Mr Eden, who dedicated his life to visiting churches to draw and write about their stained glass windows, has been revealed to have been a struck-off solicitor who had fraudulently converted a client’s money to his own use. As his later years were said to have been a struggle to survive financially, it would seem that his crime certainly didn’t pay.

Frederick Waddington was granted a licence on 29 February 1904 and became interested in church windows a few years later, metamorphosing from the ex-convict struck-off solicitor into Frederick Eden, the respectable author and decorative artist living in strained circumstances. The records are all there for Frederick Waddington to be found on TheGenealogist, it is just that they had been hidden by him adopting a new name in later life to hide from his past. If you are looking for one of your own ancestors who had changed their name, TheGenealogist’s Change of Names 1760–1900 records can also be a useful resource for researchers to use – the date range of which will be expanded soon. In Waddington’s case, however, his name change seems to have been assumed by him informally, leaving no official trail.

Perry’s Gazette in the Insolvents and Bankrupts records on TheGenealogist 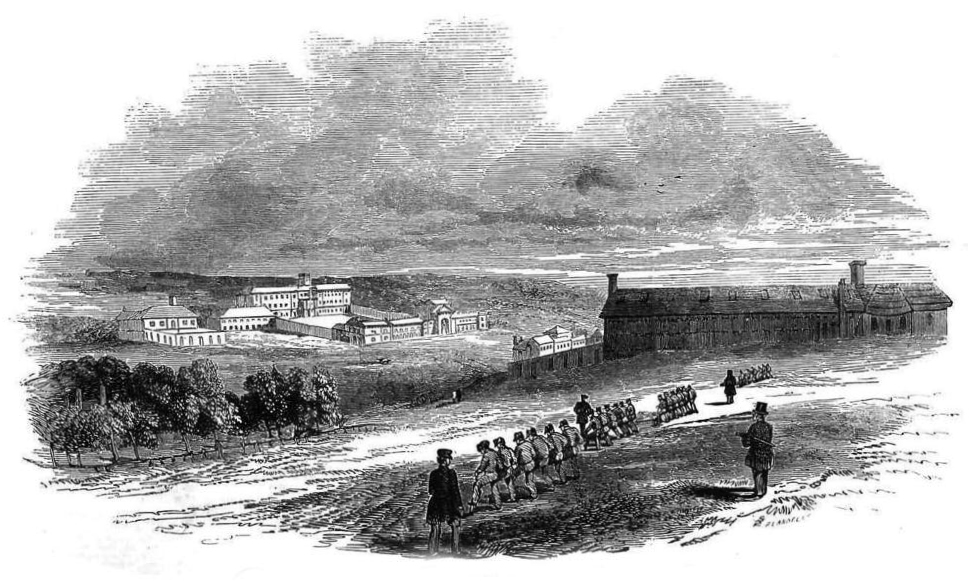 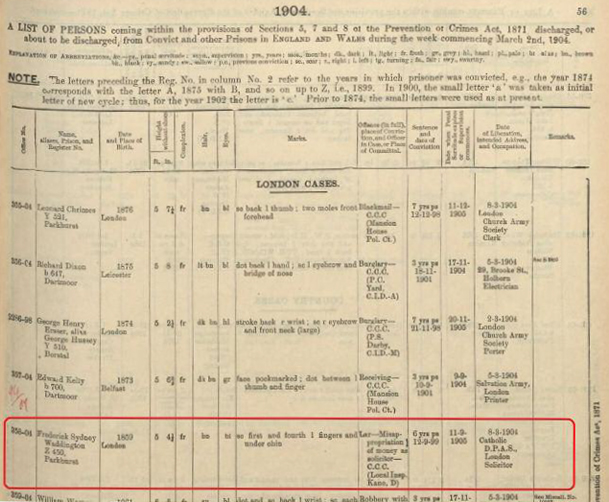