TheGenealogist has released additional new RAF records that are fully searchable by name, aircraft, location and many other fields, making it simpler to find your air force ancestors.

In a release of over 1.8 million records, this batch of RAF Operations Record Books (ORBs) joins TheGenealogist’s huge Military Records collection and includes entries for the famous children’s author Roald Dahl when he flew Hurricanes in WW2.

The Operations Record Books record the stories of day-to-day operations of units and so will give the researcher an idea of action that took place as well as give insights into the everyday lives on the bases. You can use this collection to follow an airman’s war time experiences by searching these fully searchable Air Ministry operations record books which cover various Royal Air Force, dominion and Allied Air Force squadrons that came under British Command. The AIR 27 records allow the family history researcher a fascinating insight into their relatives’ time while serving in a number of units of the air force.

The ORBs give summaries of events and can reveal encounters with the enemy, pilots who went missing or were shot down, plane crashes, as well as less traumatic details such as weather and places patrolled by the aircraft and where the squadrons were based as the war wore on. As aircrew personnel are named in these Operations Record Books, researchers wanting to follow where an ancestor had been posted to and what may have happened to them will find these records extremely useful.

Family historians will find the duties recorded in these documents interesting when they reveal the assignments that a serviceman took part in. Examples include bombing, convoy escort, submarine hunt, fleet protection, attacking aerodromes and shipping, dive bombing raids and more.

Use these records to:

These records and many more are available to Diamond subscribers of TheGenealogist.co.uk.

Hurricanes of No. 80 Squadron in Palestine, June 1941 as flown by Roald Dahl 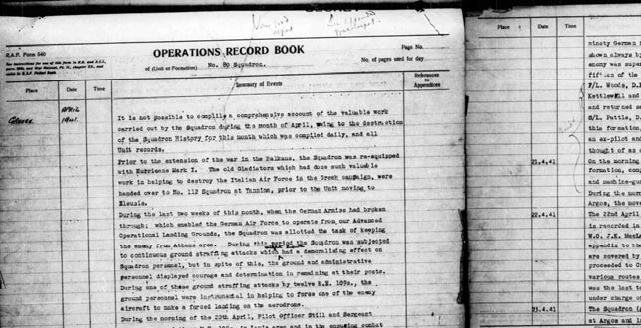 Operations Record Book for No. 80 Squadron on TheGenealogist

TheGenealogist has released the records of 83,498 individuals for the Lambeth area into its Lloyd George Domesday Survey property ownership and occupancy record set. This unique online resource includes maps and field books and gives family historians the chance to discover where an ancestor lived in the period just before and as the First World War began. This is a great tool to use with the 1911 Census, giving lots of additional information about your ancestors’ home, land, outbuildings and property. The records cover the civil parishes of Bishop’s, Brixton, Brixton North, Clapham North, Clapham South, Lower Norwood, Marsh North, Marsh South, Norwood, Prince’s, Stockwell North, Stockwell South, Streatham and Vauxhall.