All gold: the Yorkshire confectioners

Nick Thorne traces the founders of the quintessential chocolate business

For many of us there is a surname that is forever associated with York and chocolate. While these days the Terry’s brand may be owned by a multinational and no longer make its products in this country, we can trace the founders of this well known business in many of the records that can be found online.

Joseph Terry was the son of a Yorkshire baker and was born in 1793. We can discover him and his wife, Harriet, in the 1841 census of York where he is listed as a Confectioner. Researching forward another ten years we find that, in the next census, Joseph has passed away and Harriet is now the head of the family. Their 23 year old son, also called Joseph, has stepped up to be listed as ‘employing 127 hands’. Having found Joseph Jnr in the 1851 census makes us wonder where he had been on the night of the 1841 census as he was certainly absent from his parent’s address. Expanding the search, on TheGenealogist, for Joseph Jnr and his 10 year old brother Robert we are able to find two boys with the surname Terry at a school in Hessle, Yorkshire who look likely candidates. 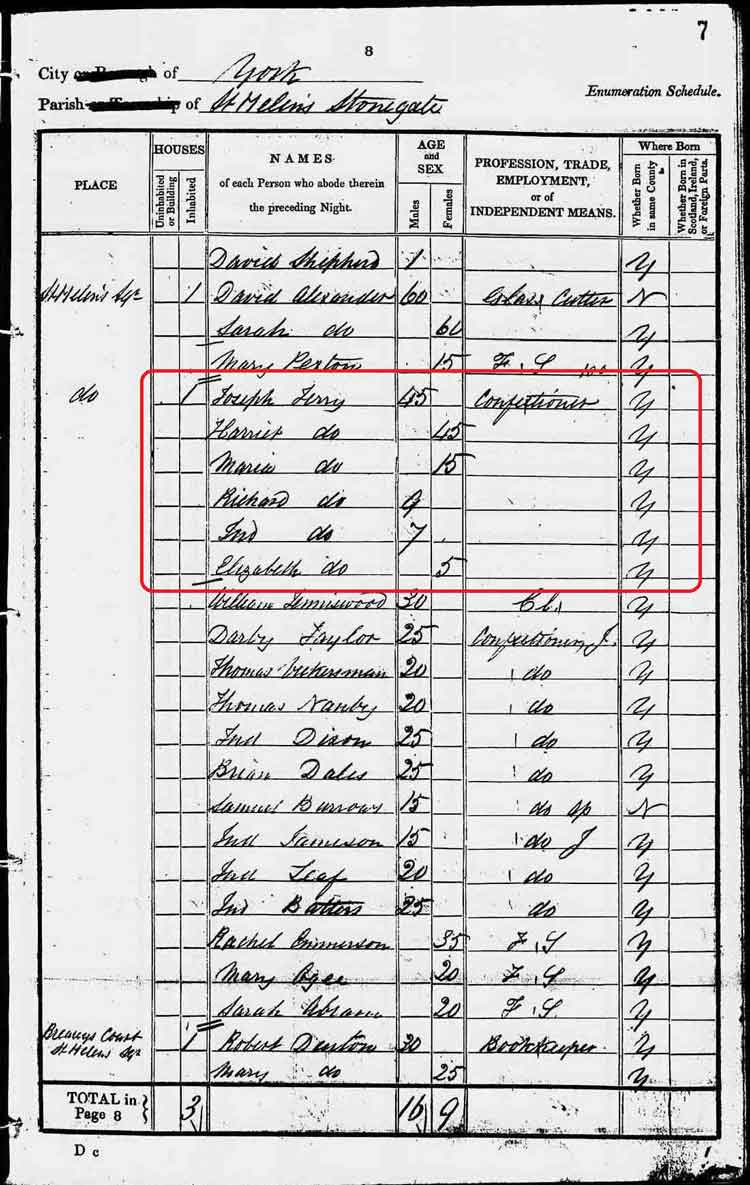 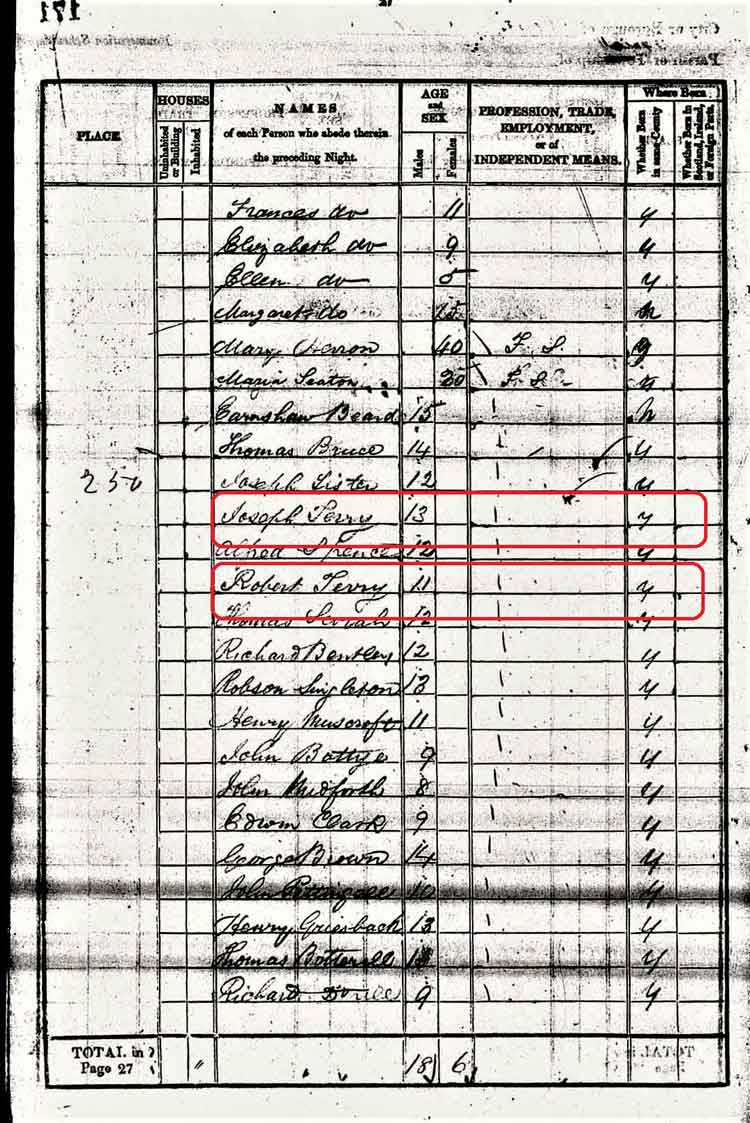 Joseph and Robert Terry weren't at home with their parents at the time of 1841 census, but away at school

Joseph Terry Snr and Harriet had married in 1823, at which time he had been a chemist and druggist in York. Consulting the Directory of the City of York 1822 we are able to quickly find him listed at Walmgate in York.

Doing more research within the pages of this publication we can also see that, in the City of York in that year, there was a confectioner named Robert Berry in business at St Helen’s Square in York. His family had been making and selling confectionery such as candied fruit peel since 1767 and, what is more, he was related by marriage to Harriet who had married Joseph Terry. The combination of the family connection and Joseph’s background as a chemist with a baker for a father, saw them join in partnership in the confectionery business. Joseph was able to bring his chemist skills to bear on developing new lines of confectionery steadily increasing chocolate products, sweetmeats, candied peel, marmalades and medicated lozenges. When in 1825 Robert Berry died, Joseph formed a new partnership called Terry & Berry with Robert’s son George.

In 1851 a similar extract in the PCC ledgers was recorded for Joseph Terry, after his death took place in York. 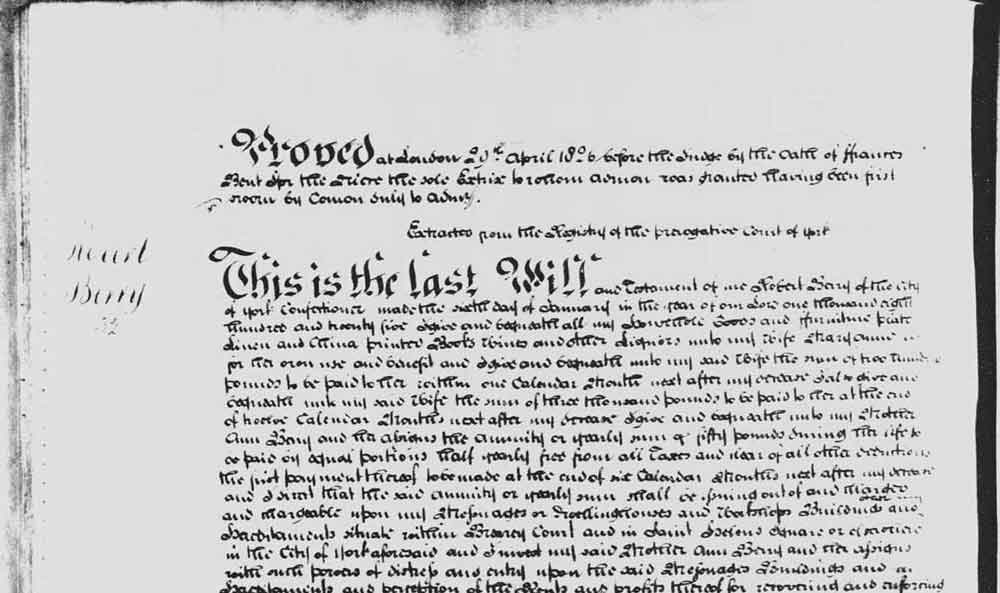 1826 will of Robert Berry of the City of York, Confectioner 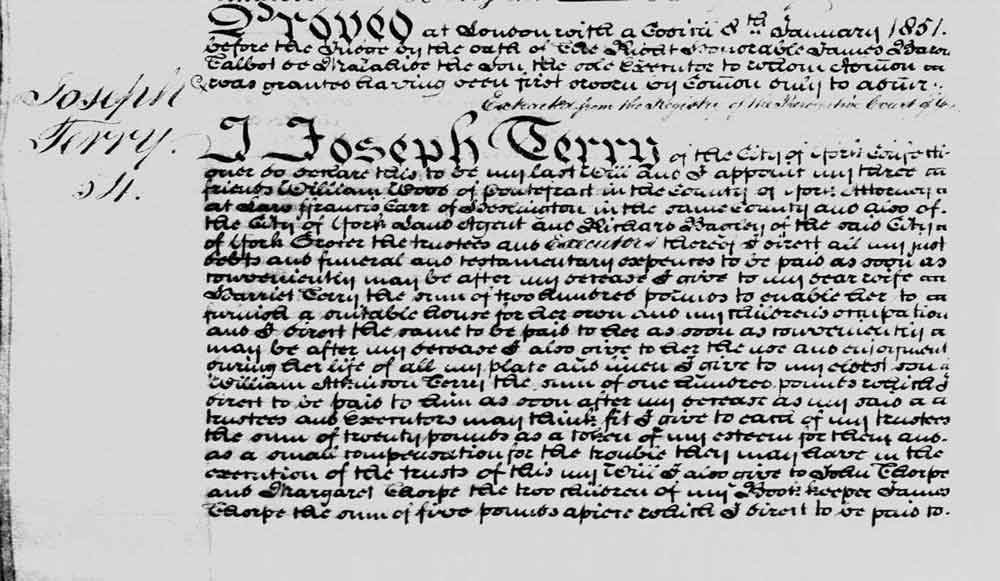 Linking the details in the will with the 1851 census of the same year, we can see that Joseph Terry the younger inherited the responsibility of a company employing the significant number of 127 hands. With his brothers, Robert and John, they went on to build on the business that their father had already set on the way to being a nationally recognised confectionery business.

The railways had come to York in 1839, as we can discover from the History Gazetteer and Directory of the East and North Ridings of Yorkshire 1840 in the Trade, Residential and Telephone Directory collection on TheGenealogist. Joseph Terry had begun utilising this new form of communication to sell the Terry's confectionery to a wider public and now his sons continued to expand the business by using the Humber estuary to import the raw materials that they needed. 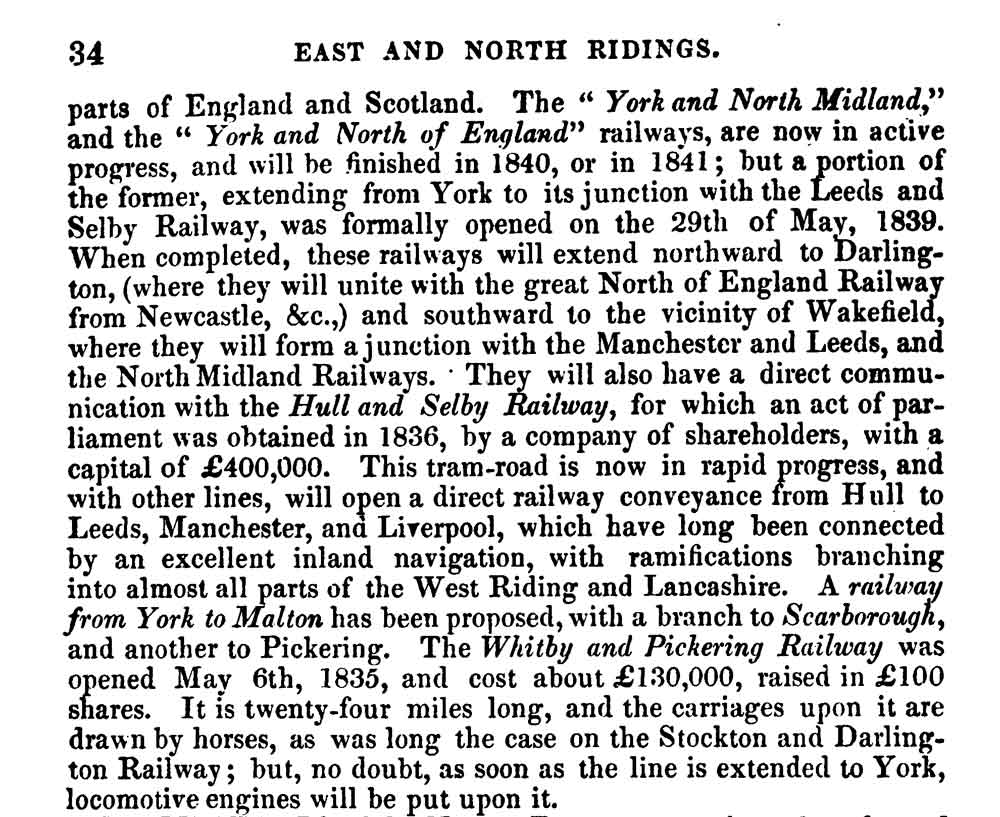 The younger Joseph not only became a successful businessman but he was also active in the life of his city. Searching for Joseph Terry in the records on TheGenealogist we can find him in the Who’s Who, published in 1897. From this book we are able to gather that in 1887 he had been the Lord Mayor of York, that he was a Justice of the Peace and that he had been knighted. We also are given his address at Hawthorne Villa, The Mount, York. 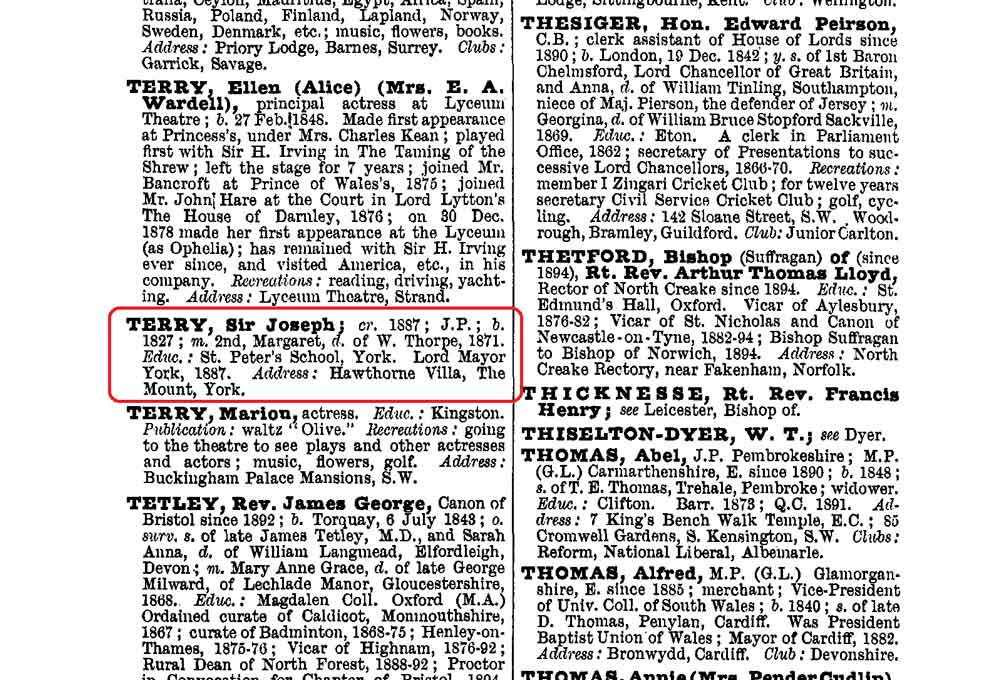 Joseph's entry in Who's Who, from TheGenealogist

An entry in The Illustrated London News for November 14, 1874, contained within the Newspaper and Magazine collection on TheGenealogist, published a list of new mayors and this reveals that the first time Joseph became Lord Mayor of York had been back in 1874. He would go on to be elected to serve as Lord Mayor of York on four occasions in total.

The 1861 census reveals that he is married to Frances, who had been born in London. Together they have two sons, Thomas W L Terry and Samuel S Terry aged 5 and 2 respectively. Following the family forward to the 1871 we see that, sadly, Joseph Terry has now become a widower and his father-in-law, a Retired Iron Founder named Joseph Goddard is living at this Dringhouse address. Looking for when Frances Terry’s death occurred finds it registered in the death records on TheGenealogist for 1866 in York. Her father, Joseph Goddard, is also a widower and we can see from the census that he had been born in St James, London. From his appearance again in the next census we may deduce that he now lived in Yorkshire with his successful son-in-law and his grandchildren. Also making up the household is his son-in-law’s new wife, Margaret and children of this second marriage - one of the girls has poignantly been given the name Frances while a boy has been called Francis.

The Census return for Dringhouses, Yorkshire

Joseph Terry, by the time of the 1881 census, gives his occupation as an Alderman and merchant. He had already served his first term as Lord Mayor and had married his second wife, Margaret Thorpe in the second quarter of 1871 - as we can find in the marriage records on TheGenealogist. The Knights of England 1127-1904 in the Peerage, Gentry & Royalty collection reveals to us that in 1887 Joseph Terry Jnr was honoured with a knighthood at Osborne House.

The Directory of Directors 1936 from the Occupational records on TheGenealogist

Joseph and Margaret's son Francis would, like his father, also be knighted and take a prominent position in Yorkshire society when he became the High Sheriff of the county. Francis had joined his elder half-brother Thomas in the family firm - though there was a twenty three year age difference between the two of them explained by Thomas being the offspring of their father’s first marriage to Frances Goddard, while Francis was Margaret’s son.

All Gold and the Chocolate Orange

A look at the Occupational records on TheGenealogist finds us the members of the Terry family in a 1936 edition of The Directory of Directors. We can see that, at this time, Sir Francis William Terry is the chairman and also the joint managing director with his nephew Noel. Thomas’s son Noel had also been working in the family business and when his father died in 1910 it was he and his Uncle who then took the company forward introducing Terry’s All Gold and the Chocolate Orange. The other member of the family to be seen in The Directory of Directors is Mr J.E.Harold Terry, another son of Thomas Terry.

The different records that we have found, using the various resources on TheGenealogist, shows a family that built a successful confectionery business over the years. Looking behind the dry facts, entered into the documents, we can deduce a human side to this family. We have seen that Sir Joseph’s first father-in-law continued to live with him, even after Joseph’s marriage to his second wife, Margaret. We have also been able to find that the descendents of both Frances and Margaret were able to share the important leadership of the company into the twentieth century. This illustrates that sometimes the facts in the records can suggest to you a bit more about your ancestors lives than just their ages and occupations and so can add layers to your family history.