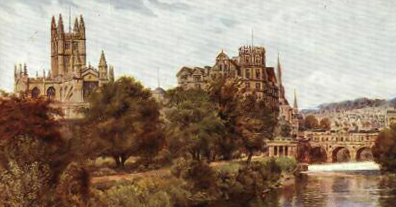 Although Bath has signs of pre-Roman origin, the settlement primarily developed in Roman times as Aquae Sulis. A temple was constructed in 60–70 AD, and a bathing complex was built up over the next 300 years. After Roman times, the baths fell into disrepair.

By the ninth century the old Roman street pattern was lost and Bath was a royal possession. King Alfred laid out the town afresh, leaving its southeastern quadrant as the abbey precinct. Edgar of England was crowned king of England in Bath Abbey in 973.

William Rufus granted the town, abbey and mint to a royal physician, John of Tours, who became Bishop of Wells and Abbot of Bath – the bishop planned and began a much larger church as his cathedral, and new baths were built.

The abbey church became derelict before being restored as the city’s parish church in the Elizabethan era, when the city experienced a revival as a spa. The baths were improved and the city began to attract the aristocracy. A royal charter granted by Queen Elizabeth I in 1590 confirmed city status.

During the English Civil War, the city was garrisoned for Charles I, but on the appearance of parliamentary forces the city surrendered. Bath was retaken by royalists following the Battle of Lansdowne on 5 July 1643.

Several areas of the city were developed in the Stuart period, and more building took place during Georgian times in response to the increasing number of visitors who required accommodation. Architects John Wood the Elder and his son laid out the new quarters in streets and squares. Much of the creamy gold Bath stone, a type of limestone used for construction in the city, was obtained from the Combe Down and Bathampton Down Mines owned by Ralph Allen (1694–1764).

In the early 18th century, Bath acquired its first purpose-built theatre, the Old Orchard Street Theatre. It was rebuilt as the Theatre Royal, along with the Grand Pump Room attached to the Roman Baths and assembly rooms. Bath had become perhaps the most fashionable of the rapidly developing British spa towns, attracting many notable visitors.

The population of the city was 40,020 at the 1801 census, making it one of the largest cities in Britain. Bath once had an important manufacturing sector, particularly in crane manufacture, furniture manufacture, printing, brass foundries, quarries, dye works and Plasticine manufacture, as well as many mills.

During World War Two, between the evening of 25 April and the early morning of 27 April 1942, Bath suffered three air raids, part of the Luftwaffe campaign popularly known as the Baedeker Blitz. More than 400 people were killed, and more than 19,000 buildings damaged or destroyed.

A postwar review of inadequate housing led to the clearance and redevelopment of areas of the city in a postwar style, often at variance with the local Georgian style. In the 1950s the nearby villages of Combe Down, Twerton and Weston were incorporated into the city to enable the development of housing, much of it council housing.

In 1987 the city was selected by UNESCO as a World Heritage Site, recognising its international cultural significance.

Exclusive census analysis from data at TheGenealogist reveals that common surnames in Bath in the 19th century included Davis, Hill, Harris and Baker. In 1841, other common names included Cook, Fisher, West, Ford, Wiltshire, Richards, King and Martin; plus Cox, Morris, Clark, Lewis, Tucker, James, Adams, Harding and Newman in 1911. In that timespan the county’s population rose from 21,000 to 73,000.

Leading data website TheGenealogist.co.uk has a wealth of records for Bath and its traditional county of Somerset. Here is a quick run-down of what you can find (in addition to national collections):