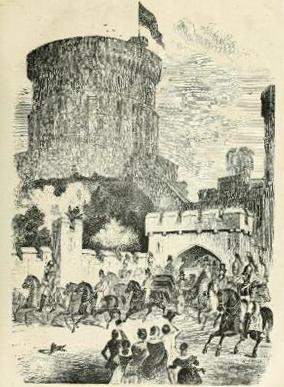 At the time of the Norman Conquest, Berkshire formed part of the Earldom of Harold, and supported him staunchly at the Battle of Hastings. This loyalty was punished by very sweeping confiscations, and at the time of the Domesday survey no estates of any importance were left in the hands of Englishmen.

Much of the early history of the county is recorded in the Chronicles of the Abbey of Abingdon, which at the time of the survey was second only to the crown in the extent and number of its possessions. The assizes were formerly held at Reading, Abingdon and Newbury.

Owing to its proximity to London, Berkshire has from early times been the scene of frequent military operations. During Alfred the Great’s campaign against the Danes, it was the scene of the Battle of Englefield, the Battle of Ashdown and the Battle of Reading. In the Civil War of the 17th century, the royalists had some of their strongest garrisons here, and Reading endured a ten-day siege by the parliamentary forces in 1643. Newbury was the site of two battles, in 1643 and 1644. The Battle of Reading took place in December 1688, the only substantial military action in England during the Glorious Revolution against James II. It ended in a decisive victory for forces loyal to William of Orange and has been celebrated in Reading for hundreds of years afterwards.

The natural advantages of the county have always encouraged agricultural rather than commercial pursuits. The soil is especially adapted for sheep-farming, and numerous documents testify to the importance and prosperity of the wool trade in the 12th century. At first this trade was confined to the export of the raw material, but the reign of Edward III saw the introduction of the clothing industry, for which the county afterwards became famous. This trade began to decline in the 17th century. The malting industry and the timber trade also flourished in the county until the 19th century. Woollen cloth, sacking, and sail-cloth were formerly made in large quantity, but had already ceased to be of any consequence by the same era.

The only manufacturing centre of significance was Reading, which was principally famous for its biscuit factories (the 1911 census lists around 1400 biscuit factory labourers). Boatbuilding was also carried on at Reading.

Berkshire has also been known as the Royal County of Berkshire since at least the 19th century because of the presence of Windsor Castle and was recognised as such by the Queen in 1957. In 1974, significant alterations were made to the county’s administrative boundaries – the towns of Abingdon, Didcot and Wantage (and the whole Vale of the White Horse) were transferred to Oxfordshire, and Slough was gained from Buckinghamshire – but the traditional boundaries of Berkshire, bordered to the north by the River Thames, were not changed.

Leading data website theGenealogist.co.uk has a wealth of records for Berkshire. Here is a quick run-down of what you can find (in addition to national collections):