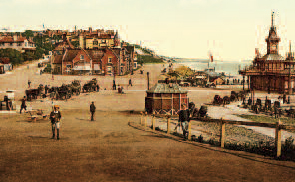 Settlement in the Bournemouth area goes back thousands of years but, although it is now the largest town in Dorset, until the early 19th century it was still largely a remote and barren heathland, used only by smugglers and revenue troops. The area now called central Bournemouth was simply the mouth of the Bourne Stream. No one lived at Bourne Mouth and the only regular visitors were a few fishermen, turf cutters and gangs of smugglers who landed their cargoes of spirits, tea and tobacco on the deserted beach.

Until 1802 the area was common land. The Christchurch Inclosures Act 1802 and the Inclosure Commissioners’ Award of 1805 transferred hundreds of acres into private ownership for the first time. More than half the land sold was bought by two men, William Dean of Littledown House and Sir George Ivison Tapps, the Lord of the Manor of Christchurch. When retired army officer Lewis Tregonwell visited in 1810, he was so impressed by the area that he bought several acres and built a home.

Anticipating that people would come to the area to indulge in the newly fashionable pastime of seabathing, an activity with perceived health benefits, Tregonwell built a series of villas on his land between 1816 and 1822, which he hoped to let out. The common belief that pinescented air was good for lung conditions, and in particular tuberculosis, prompted Tregonwell and Tapps to plant hundreds of pine trees. These early attempts to promote the town as a health resort meant that by the time Tregonwell had died in 1832, Bournemouth had grown into a small community with a scattering of houses, villas and cottages.

In 1835, after the death of Tapps, his son Sir George William Tapps-Gervis started developing the seaside village into a resort similar to those that had already grown up along the south coast such as Weymouth and Brighton. The first two hotels opened in 1838. In 1841 the physician Augustus Bozzi Granville visited and featured the place in his book The Spas of England, which put the town on the map as the perfect place for people with health problems.

Bournemouth quickly became a destination for affluent holiday-makers and for invalids in search of the sea air. In 1856, Parliament approved the Bournemouth Improvement Act, to organise paving, sewers, lighting and other services.

The area continued to progress with the development of the railways and the popular idea of visiting the seaside for holidays. In 1870 the London and South Western Railway Company opened the first railway station in the town, following an extension of the Ringwood-Christchurch branch line. The town was later served by another station, as well as trams and trolleybuses.

In 1880 the town had a population of 17,000 but, by 1900, when railway connections to Bournemouth were at their most developed, the population had risen to 60,000 and it had become a favourite location for visiting artists and writers.

In its 1880s heyday the Mont Dore Hotel, now the Town Hall, was renowned for its sumptuous luxury, and had one of the first telephones in the country. The hotel was then used during the First World War as a hospital to treat wounded soldiers.

A local government reorganisation of county boundaries saw Bournemouth being moved from Hampshire to Dorset in 1974.

Leading data website TheGenealogist.co.uk has a wealth of records for Bournemouth, Dorset and Hampshire. Here is a quick run-down of what you can find (in addition to national collections):