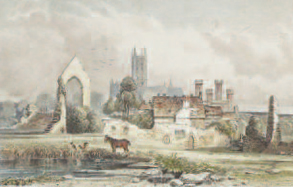 In the first century AD, Canterbury became established as an important staging post for the Romans, situated between their port of Richborough and the growing city of London. The city’s current name dates from Saxon times, simply meaning ‘the town of the men of Kent’.

One of the city’s most famous visitors was of course St Augustine of Canterbury, chosen by Pope Gregory to convert the heathen Anglo-Saxons; he landed in Thanet in 597 and successfully converted King Ethelbert of Kent, based in Canterbury. Augustine founded the original cathedral and a nearby abbey later named after him. Alas the cathedral burned down in 1067, so what we see today is the evolution of its successor started by Lanfranc in 1070. Augustine became the first Archbishop of Canterbury, and the See has had authority over the Anglican Church since the year 672. The city was badly hit by violent raids from the Vikings in the ninth and tenth centuries.

Canterbury hit its heyday in later medieval times. Much of this was precipitated by the murder of archbishop Thomas Becket in 1170. His murder turned Canterbury into a major centre of Christendom and brought with it a multitude of coins in pilgrims’ pockets, fuelling the redevelopment of the city walls and of course inspiring Chaucer’s 14th century Canterbury Tales. All of this came abruptly to an end in the reign of Henry VIII, when he destroyed Becket’s shrine.

Canterbury managed to prosper as a mercantile centre in the centuries that followed, again thanks to its position between London and the coast. Much of this was thanks to successive waves of Huguenot and Walloon refugees from France and Flanders – Canterbury had the largest such congregation outside London, and today there is still a French Protestant chapel in the cathedral. The refugees brought with them skills in the textile industries in particular, such as wool and silk weaving, as well as expertise in metalwork, brewing and even dentistry.

The city at the heart of Anglicanism was inevitably caught up in the Civil War – Cromwell’s supporters took over the city and pulled down a statue of Christ in the 16th century cathedral gate (it was only replaced in 1992), although a mob of Royalist locals fought back briefly in 1647, enraged by attempts to ban Christmas. Cromwell visited to adulation in 1651 – then Charles II stopped off on his return from exile in 1660.

In the late 18th century, the city’s character changed somewhat, with the Commission for Paving, Lighting and Watching the Streets advocating the knocking down of most of the city gates to help the traffic. The proximity to France also gave the city a military role in this era, with a huge barracks larger than the city centre itself being built outside the walls

In 1830 the city was at one end of what’s claimed to be the world’s first passenger railway, the six-mile Canterbury and Whitstable, served by Robert Stephenson’s Invicta engine. Connection to London came in 1846, with a rival route opening in 1860. The railways fuelled suburbia, with commuting to London a common activity from the late 19th century onwards.

Again, the proximity to Europe affected the city in the 20th century; in World War 2 a quarter of the medieval city was lost to bomb damage, although the cathedral itself remained unscathed.

Exclusive census analysis from the data at TheGenealogist.co.uk reveals that common Canterbury surnames include Marsh, Baker, Andrews, Martin and Harris. Hayward, Howard, Hart, Adams, Austen and Fox were also common in 1841, as were Austin, Powell, Kennett, Kemp, Scott, Webb, Cook and Collard in 1911.

Leading data website theGenealogist.co.uk has a wealth of records for Canterbury and Kent. Here is a quick run-down of what you can find (in addition to national collections):