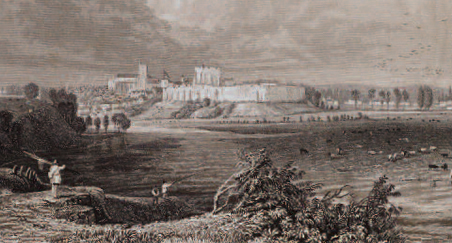 Carlisle was historically the county town of Cumberland, and remains so for Cumbria, which absorbed neighbouring Westmorland in 1972. Carlisle is at the confluence of the rivers Eden, Caldew and Petteril, only 10 miles south of the Scottish border.

Carlisle was a significant Roman settlement, near one end of Hadrian’s Wall, and became an important military stronghold in the Middle Ages. By the time of the Norman conquest in 1066, Carlisle was part of Scotland. This changed in 1092, when William the Conqueror’s son William Rufus invaded the region and incorporated Cumberland and Carlisle into England. The construction of Carlisle Castle began in 1093 on the site of the Roman fort – the castle once served as a prison for Mary, Queen of Scots. It now houses the Duke of Lancaster’s Regiment and the Border Regiment Museum.

The town gained the status of a city when its diocese was formed in 1133, and its priory became Carlisle Cathedral.

Carlisle was a major territory within the lands of the Border Reivers, and the region around it changed hands a number of times, and the authority of both Scotland and England was weak in this area. The death of Queen Elizabeth I in 1603 and her succession by James VI of Scotland as King James I of England allowed more determined and coordinated efforts to suppress reiving. The borderers were not quick to change their ways and many were hanged and whole families were exiled to Ireland. It was not until 1681 that the problem of the reivers was acknowledged as no longer an issue.

In the English Civil War, the castle was garrisoned for the king. It endured a long siege from October 1644 until June 1645 when the Royalist forces surrendered after the Battle of Naseby. The city was occupied by a parliamentary garrison, and subsequently by their Scots allies.

After the 1707 Act of Union, Carlisle remained a garrison town but ceased to be a frontier one – although Charles Edward Stuart took the city briefly in the Jacobite Rising of 1745.

In the early 19th century, textile mills, engineering works and food manufacturers built factories in the city, mostly in the Denton Holme, Caldewgate and Wapping suburbs in the Caldew Valley. These included Carr’s of Carlisle, Kangol, Metal Box and Cowans Sheldon. Shaddon Mill, in Denton Holme, became famous for the largest cotton mill in England.

The expanding industries brought about an increase in population as jobs shifted from rural farms towards the city. This produced a housing shortage where at one point 25,000 people in the city only had 5000 houses to live in. In the late 19th century, mass housing was eventually built west of the city walls.

In 1823 a canal was built to Fisher's Cross (Port Carlisle) to transport goods produced in the city. This enabled other industrial centres such as Liverpool to link with Carlisle via the Solway. This was short-lived and when the canal operators ran into financial difficulty the waterway was filled in. A railway was built in place of the canal.

Carlisle became a major railway centre on the West Coast Main Line, with seven companies using Carlisle Citadel railway station, and the city had the largest railway marshalling yard in Europe at Kingmoor. Transport was aided by the City of Carlisle Electric Tramways from 1900 until 1931. In 1912, the boundaries of Carlisle were extended to include Botcherby in the east and Stanwix in the north.

Exclusive census analysis from the data at TheGenealogist.co.uk reveals that common Carlisle surnames include Graham, Bell, Armstrong, Little, Irving, Scott, Johnston, Hodgson, Watson, Jackson and Atkinson; plus Forster, Hetherington and Richardson were common in 1841, as were Davidson, Carruthers and Simpson in 1911.

Leading data website TheGenealogist.co.uk has a wealth of records for Carlisle. Here is a quick run-down of what you can find (in addition to national collections):