Charmed by her attractions

Finding a scandalous ancestor can be fascinating for the genealogist, says Nick Thorne 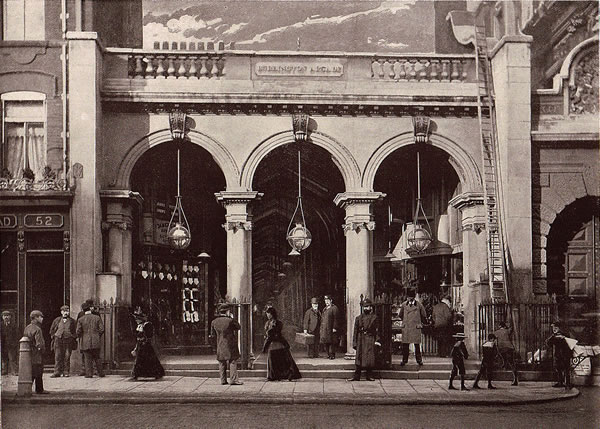 Burlington Arcade was, and still is, an upmarket shopping location.

A family tree packed with dates, ages and names is a good start, but family history is more than just facts ad figures. It is made so much more interesting when you can add some substance to your tree in the form of real life stories. If you can find anecdotes about your forbears that add colour to dry facts you have already assembled from the births marriages and death data, then this should be your aim as a family historian. This is especially true when you find that an ancestor had been involved in some sort of scandal, as in the following tale of a West End hairdresser and perfumer called Anthony Hewlett.

A collection of great resources to use, in a quest to build an interesting family story, is to look at some of the newspapers and magazines, trade directories, image archives and other records on TheGenealogist.

As an example of building a story for an ancestor, let's take a look at Anthony Hewlett. In a search of the 1841 census, we can find that he was living in Burlington Arcade, in the St James area of London with Mary Ann his wife. Also present are Emma, his nine-year-old daughter, and his infant son, George, who was just six weeks old. Hewlett was working as a hairdresser. 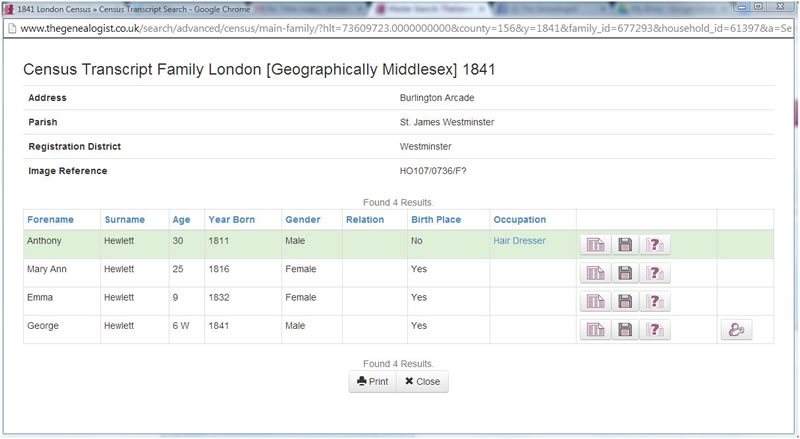 The 1841 census shows the Hewlett family living in London

Knowing that he lived in the Burlington Arcade, which is still a covered upmarket shopping arcade to today, we may assume that he carried out his business there and lived above the shop. The arcade itself was built by Lord George Cavendish adjacent to his residence, Burlington House. The development was reputedly constructed to prevent passers-by from throwing oyster shells and other rubbish over the wall of his home. It opened to the public in 1819.

The Image Archive on TheGenealogist allows us to relive the past through the eyes of our ancestors by looking at old photographs from their era. You can find many churches, streets, famous people and scenes from between 1850 to 1940; above, is the entrance to Burlington Arcade, taken from the site's Image Archive collection.

People such as Anthony Hewlett can usually be found included in a street or trade directory, such as Kelly's or Pigot's. These publications also gave general information about the town or area, including postal services, times of coaches and departure points, potted histories of the town and more, that can be useful to understanding the social history of your ancestor's times. Lists were normally compiled alphabetically by name, street, business, trade or profession and TheGenealogist has a great collection of historic residential and trade directories on its site. Anthony Hewlett appears in the 1846 Kelly's Post Office Directory for London, based at 5 Burlington Arcade. 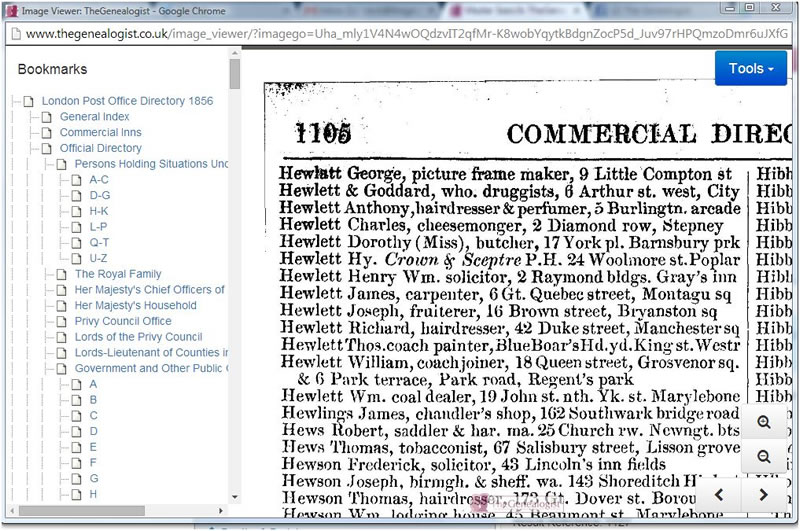 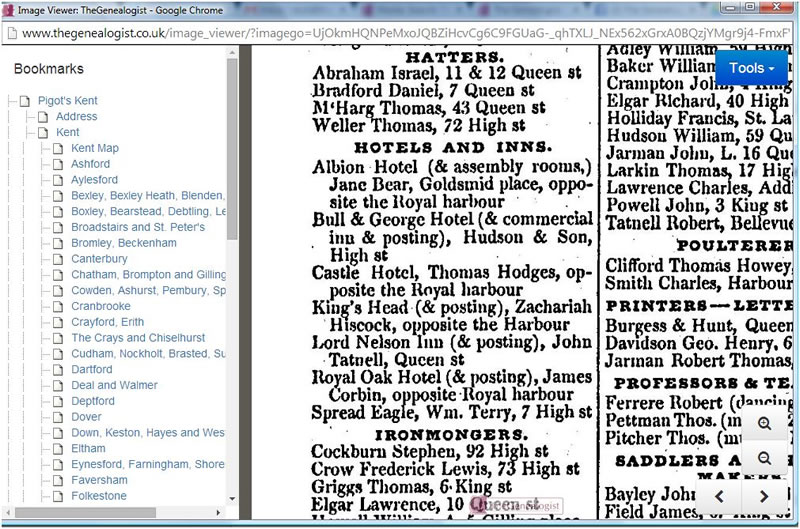 If we continue to look for Anthony in the census collection on TheGenealogist, we can see that, in 1851, he was living at 31 Sidney Street in Chelsea. He was, however, still listed in the 1856 Kelly's Directory as a hairdresser and perfumer at 5 Burlington Arcade. With these resources, we have gained a bit more of the back-story of our subject.

A particularly rich resource to search for social background or, as in this case, the name of your ancestor, is the Newspaper and Magazines collection of The Genealogist. Researching for Anthony Hewlett returns us a fascinating news article in the Illustrated London News of 18 June 1846. 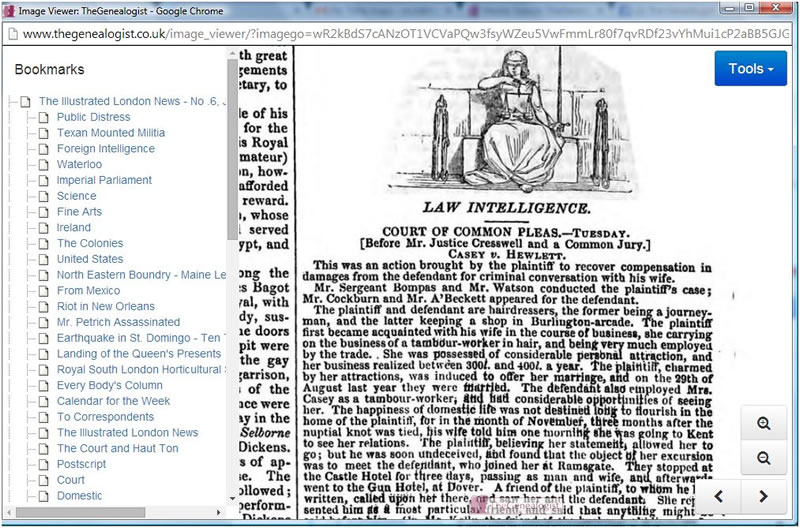 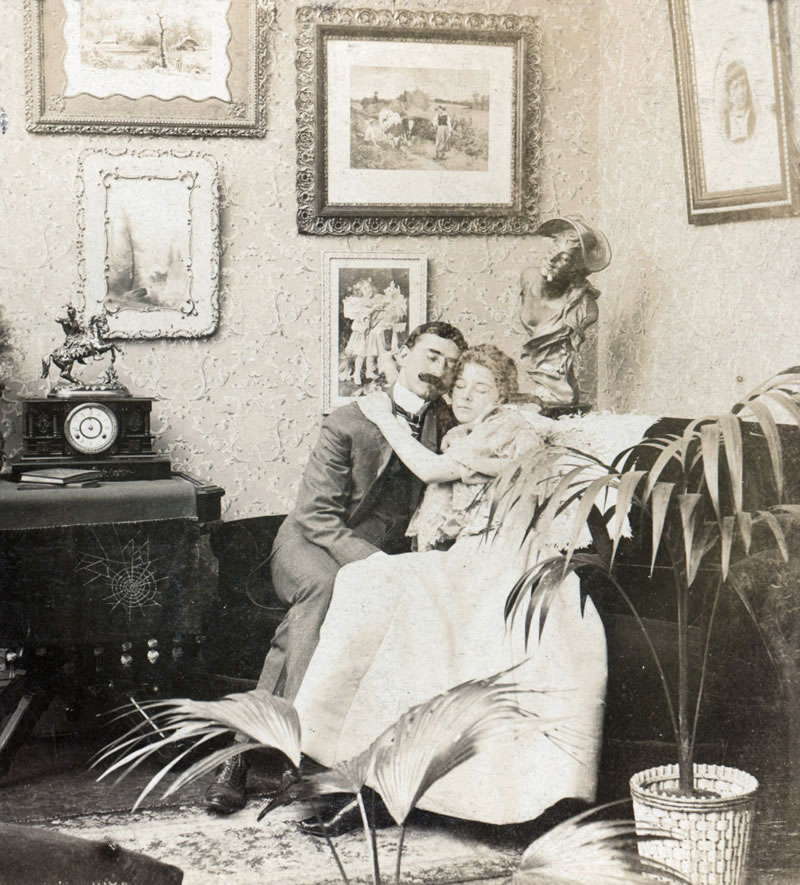 The story, as reported under Law Intelligence in the Illustrated London News, was that another hairdresser had first became acquainted with his future wife in the course of his business.

The lady in question had been carting on her own lucrative business as a tambour-worker in hair and "very much employed by the trade". The article writer makes quite a bit about the attraction of the woman, making us particularly aware of her economic appeal – she realised between £300 and £400 a year from her work, or about £25,000 in today's money. "The plaintiff, charmed by her attractions, was induced to offer her marriage" and we are told that on 29 August the previous year, they had been married.

Anthony Hewlett was the defendant. He had also employed Mrs Casey, and so had "considerable opportunities of seeing her" Three months into her marriage, he and Mrs Casey travelled to The Castle Hotel in Ramsgate for a three-day stay as man and wife, swiftly followed by a stay at the Gun Hotel at Dover.

With the case going against Hewlett, his lawyer argued that any damages awarded against him should be small, because of the short length of the Caseys' marital union. About Mr Casey, the plaintiff, he contended that, "under the circumstances he could not lament the loss of much domestic happiness by being deprived of the society of his wife."

Having summed up the case, Mr Justice Cockburn let the jury retire. They then found for the wronged Mr Casey, and the court awarded him damages of £150.

If we take a look at the Pigot's trade directory for Kent, from 1836, available on TheGenealogist, we can see the entry for the Castle Hotel, where the two illicit lovers stayed at first, and see that it is opposite the Royal Harbour in Ramsgate.

Going forward in years, it seems that Anthony Hewlett was forgiven by his wife and settled down to life as a perfumer. The 1861 and 1871 censuses show him living at Caheley Villa in the King's Road, Chelsea, with his wife Mary Ann.

To add a bit of background and social history to your family tree, then, once you have used the main census and BMD records to find your ancestors, explore some of the other rich resources that TheGenealogist offers – such as newspaper and magazines, trade and residential directories, and image archives.