Large release of court and police records from TheGenealogist

TheGenealogist is adding to its Court & Criminal records by publishing online a new collection of Quarter Session rolls and books from Warwickshire, Worcestershire, Shropshire, Surrey and Middlesex covering dates from as far back as the 16th century and up to, in some cases, the Victorian period.

The Quarter Session records were produced by local courts traditionally held at four set times each year. These sessions were held by two or more justices of the peace and presided over by a chairman, accompanied by a jury, at Epiphany (in January), Easter (March/April), Midsummer (June/July) and then at Michaelmas (September/October).

These records enable researchers to find the names of people before the courts, including those indicted, witnesses, and the justices of the peace and the clerks. Some of the earliest records in this release reach as far back as 1549 for Middlesex and 1591 in Worcester

Indictments can range across a wide number of offences. These include larceny, housebreaking, assault and riot, running unlicensed alehouses, receiving rogues and not going to church on Sunday. In one example from Worcestershire in 1613, Margaret Lewys stole ‘an old towell’ at Feckenham. Other proceedings include one involving Daniel Steane who was fined 20s at a private session at Wolston, Warwickshire in 1631. His indictment was for ‘selling less than a full quart of his best ale for a penny’.

Searching these new records for your ancestors may also reveal them appearing in the many orders handed down by the JPs. These can include the names of people at the bottom rung of society who were in need of financial help from their communities. An example from the Easter 1625 session in Warwickshire is the case of Anne Harte of Hampton in Arden. Her husband had been ‘pressed for a soldier out of this county and have left her destitute of maintenance and one child’; the justices of the Quarter Sessions made an order to the effect that Hampton in Arden pay her 4d weekly and find her work; plus, if she were to get sick, the parish officials were to pay her more ‘until this court take order to the contrary’.

From riotous Luddites to the gentry sitting on the bench, all echelons of society can be found in these Quarter Session records, all fully searchable at www.thegenealogist.co.uk.

Meanwhile the site has also recently launched a new collection of Police Letter Books for Hampshire. This is an intriguing mixture of promotions, retirements, movements, and other observations about police officers in the county from 1891 to 1911. These records reveal names and collar numbers of officers promoted, reduced in rank or dismissed from the force for committing various acts of misconduct. The misdemeanors often seem to involve alcohol, ranging from accepting a glass of beer to being drunk on duty. Commendations given to more competent officers are also included.

TheGenealogist has also released full colour tithe maps for two English counties to join the greyscale maps already available for all of England and Wales. This latest release covers parishes in the County of Middlesex and in Northumberland, allowing researchers to view the plots where their ancestors may have owned or occupied land at the time of the survey, which took place at the start of Victoria’s reign.

The Northumberland collection contains over 600 colour maps, linking to more than 62,000 tithe records for the county. TheGenealogist has the only online national collection of tithe records and maps. 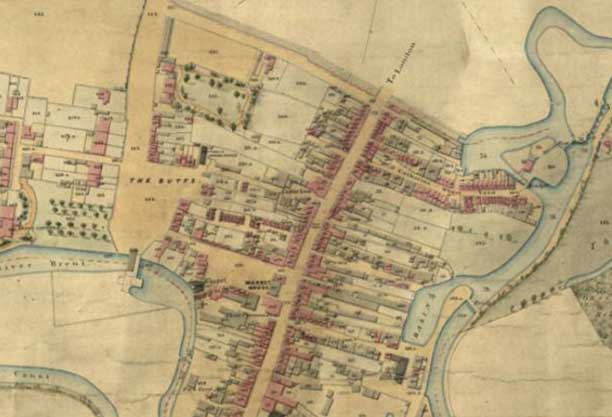