The Illustrated London News for 30 January 1864 indignantly refers to “The Great Scandal Case” of George Victor Townley, convicted of the cold blooded murder of Miss Elizabeth Caroline Goodwin. I immediately wondered what the circumstances were that had so affronted the gentlemen of the press? We are used to the fourth estate today taking a stance over a matter of justice – especially when they believe it will be popular with their readers and it seems it was just the same in the past.

To find out more I entered the name George Townley, plus the date, into TheGenealogist.co.uk’s search engine. and selecting the Newspapers & Magazines collection gave me a newspaper report about the trial. There was also another intriguing piece indicating that the Derbyshire magistrates were demanding Townley’s execution – while he had been removed to Bethlehem Hospital lunatic asylum! The account raised several questions. Why were the Home Office commissioners enquiring into the present state of Townley’s mind? The indication was that Townley had been convicted because the jury had decided that he was legally responsible for his acts at the time of the murder. So why, then, were the authorities now sending him to a mental asylum for assessment, rather than to a judicial death on the scaffold? What had so exercised the magistrates that had caused them to address their protest to Sir George Grey? (Sir George, I quickly discovered by running another search of the newspaper records on TheGenealogist, held the position of Home Secretary from 1861.) 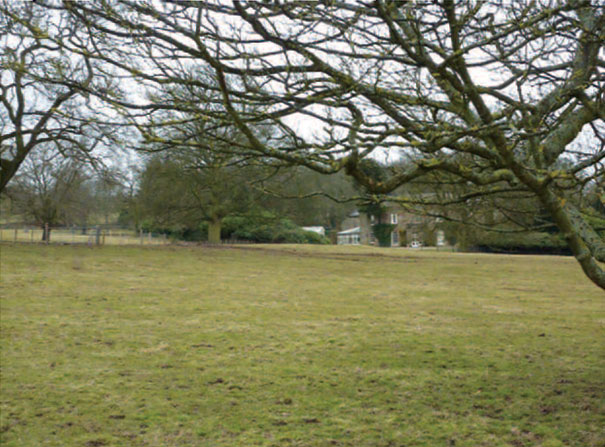 Wigwell Grange, near Wirksworth, as it is today 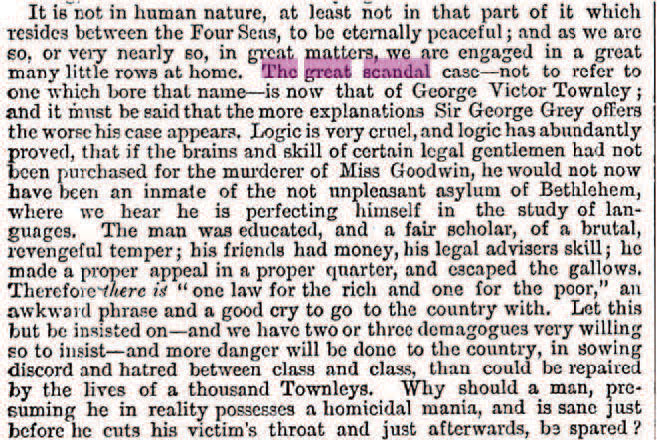 Five months earlier George Townley had murdered his ex-fiancée, Miss Elizabeth ‘Bessie’ Goodwin, by stabbing her in the neck with a knife. Miss Goodwin had been living at the time with her 80-year-old grandfather, Captain Francis Green Goodwin, at Wigwell Grange near the small Derbyshire village of Wirksworth. Townley was reported by the press of the day to be the son of a wealthy middle-class merchant from Hendham Vale near Manchester. Searching the census collections on TheGenealogist, I was able to find that Townley’s father was a General Commissions Agent, a term that can cover quite a broad range of business activity.

By turning to the Trade, Residential & Telephone collections at TheGenealogist I was soon able to find an entry in Slater’s 1856 directory of Manchester that revealed that the family were shipping and marine insurance agents.

Miss Bessie Goodwin’s Uncle had at one time lived in Manchester and was acquainted with the Townleys. It was on a visit, to her see her Uncle, that she had been introduced to George Townley and they had begun to see each other. After several meetings, the two had gone on to become engaged to be married, but during the summer of 1863 Miss Goodwin had second thoughts and wrote to Townley breaking off the engagement.

It turned out that she had met a young clergyman, who had come to live at Wirksworth. Her family thought that she and the Reverend made a better match as George Townley had no occupation, relying on his father for money and so had questionable prospects. Townley was upset by the message ending the engagement and after an exchange of letters the two agreed to meet at Wigwell for one last time.

On the day of the encounter, they met at the house before being seen to walk through the grounds and into the road, where after some time together Townley stabbed her in the throat with fatal consequences. From the initial report of the crime it seems that he then actually assisted a good samaritan to carry the dying Bessie back to her grandfather’s house and even kissed the dead girl. He did, however, admit to having killed her to several people at the time, including her grandfather and to the police when they attended Wigwell Grange.

By searching TheGenealogist's Newspapers & Magazine collection and selecting the victim’s surname and the keyword of Derbyshire, plus the year 1863, we can see the first report in the Illustrated London News for 29 August, 1863.

Townley, having admitted the offence, was then held at the Old Lock Up in Wirksworth prior to his trial at Derby Assizes later in the year. A plea of insanity was put forward by his defence counsel, citing examples of madness in Townley’s maternal family. The jury dismissed this as the prosecution showed that the mental illness was in collateral branches of his family and had not exhibited in his direct line. On being instructed as to the law, they then found him guilty of the murder. 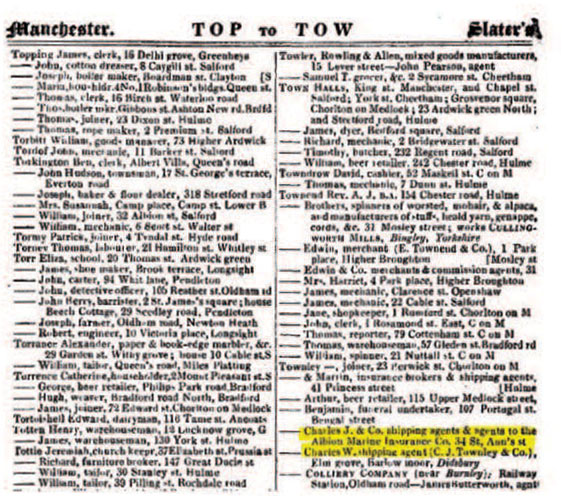 Slater’s Directory for Manchester 1856 on TheGenealogist 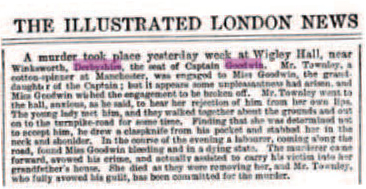 The judge, however, who had concerns about the convict’s mental health at the time of the trial, wrote to the Home Secretary who used his powers to grant a respite, while enquiries were made into Townley’s sanity. Errors were made in the first review, by the Lunacy Commissioners, and that prompted a second in which Townley was found to be sane. Would the press be rewarded with the convict being swiftly despatched to meet his maker? The Home Office didn’t think so and the sentence was then commuted to penal servitude for life. Townley was moved to Pentonville to serve the rest of his days in the ‘model’ jail that served as the template for many prisons built to a similar design in Britain and across the British Empire.

The trial had created quite a lot of interest as both people involved were members of the gentry. When the verdict became known, however, there was an uproar and the national press were outraged by what seemed an injustice. It appeared to the papers and many readers that Townley had been able to avoid being hanged as a result of privilege. The newspapers contrasted Townley’s case with examples of similar murderers, of lesser social standard, whom had all suffered the ultimate sanction of the law. The Home Office were forced to write to a Derbyshire MP, and the magistrates, refuting that money influenced the sequence of events and that in similar circumstances a poor man would also receive the same treatment.

Using the records available on TheGenealogist I was able to find Miss Elizabeth Goodwin and her 81 year old grandfather, in the 1861 census. What is immediately striking is that Francis G Goodwin is a Magistrate himself! This may well go a long way to explain why the Home Secretary had received a demand, from a number of Derbyshire Magistrates, that Townley should suffer death.

Francis Goodwin, a search of TheGenealogist’s Tithe apportionments and maps show, was a considerable landowner in Derbyshire with land leased to others to occupy.

Looking at “The Great Scandal Case” now, the argument for a conspiracy to save the murderer's life looks less likely. Whatever power his family could have wielded was matched by that of the victim’s family. On the question of sanity it is telling that the judge, having passed the death sentence, was concerned enough about the mental health of Townley to write to the Home Secretary. On being found sane the convicts commuted life sentence, of penal servitude, was not to last for long. In February 1865 George Victor Townley committed suicide by jumping over a balcony, on his way back from the chapel at Pentonville prison. His demise can be found in the death indexes on TheGenealogist for Islington, the registration area for the Pentonville prison. Using the various newspaper records, census, BMDs, directories and landowner collections I found that I was easily able to uncover more of the story of this tragic case of murder. 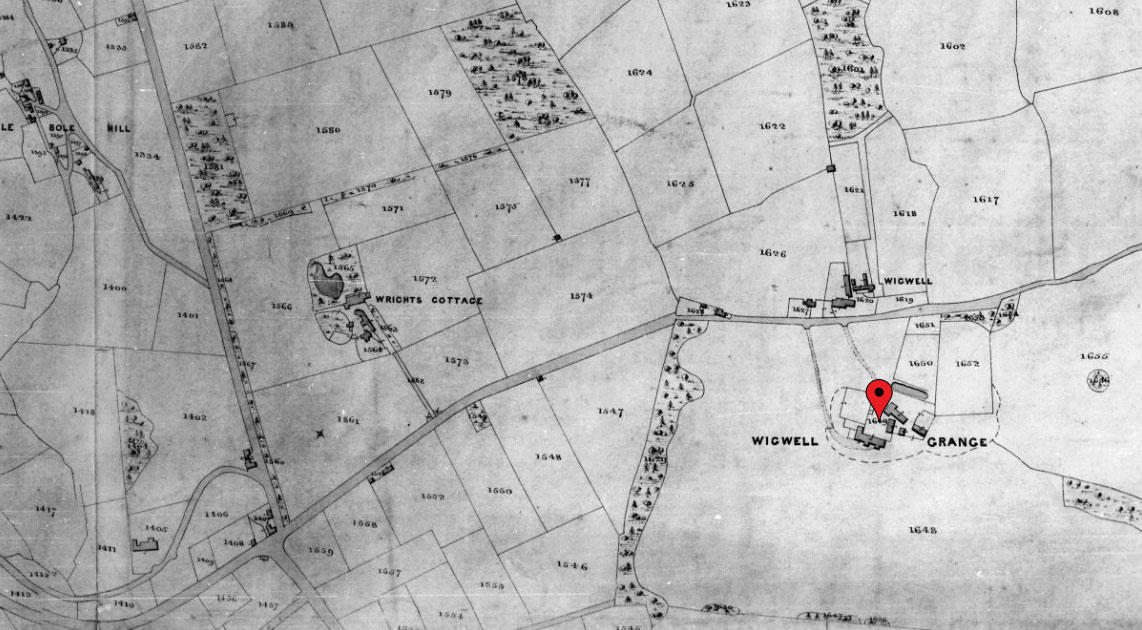 The Goodwins in the 1861 census for Derbyshire on TheGenealogist 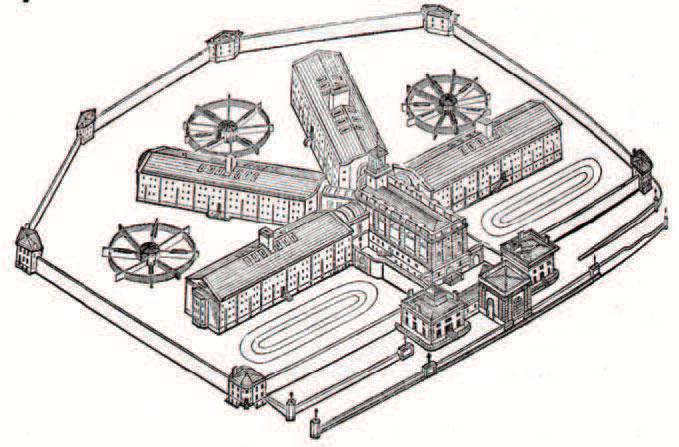 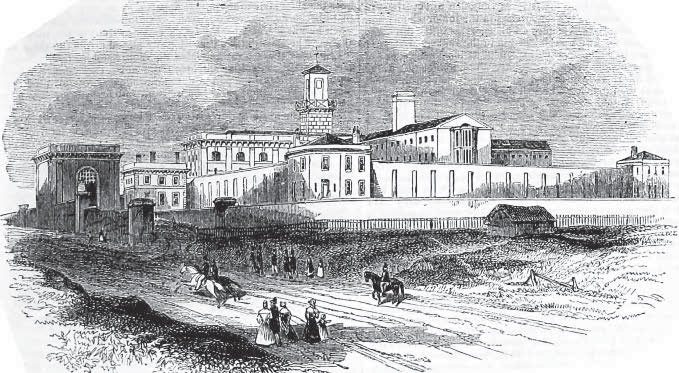