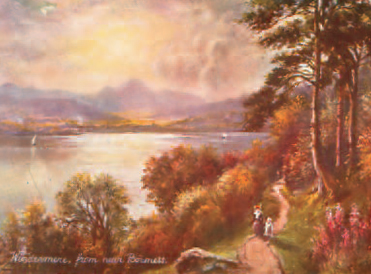 At the end of the Roman era in Britain (c410 AD) the inhabitants of this area were native Romano-Britons who spoke Cumbric, related to Old Welsh.

During the Early Middle Ages Cumberland formed the core of the Brythonic kingdom of Rheged. By the end of the 7th century most of Cumberland had been incorporated into the Anglo-Saxon kingdom of Northumbria. Most of modern-day Cumbria was ruled by Scotland at the time of the Norman Conquest of England in 1066 and thus was excluded from the Domesday Book survey of 1086. In 1092 Cumberland was invaded by William II and incorporated into England. The region was dominated by many wars and border skirmishes, and the raids of Border Reivers.

At the time of the Domesday Book, parts of Westmorland were considered either to form part of Yorkshire or to be within the separate Kingdom of Strathclyde. The Normans created the baronies of Kendal and Westmorland. Appleby was later the historic county town of Westmorland (Carlisle for Cumberland).

After the Jacobite Risings of the 18th century, Cumberland became a more stable place and, as in the rest of northern England, the Industrial Revolution caused a large growth in urban populations. In particular, the west-coast towns of Workington, Millom and Barrow-in-Furness (then in Lancashire) saw large iron and steelworks develop, with Barrow also developing a significant shipbuilding industry.

Kendal, Keswick and Carlisle all became mill towns, with textiles, pencils and biscuits among the products manufactured in the region.

Coal and iron were extensively worked in the west of Cumberland, the coalfield stretching from the neighbourhood of Whitehaven to that of Maryport. Plumbago or black lead was obtained in considerable quantities near Keswick. Owing to the general elevation of the land and the moisture of the climate, dairy and sheep farming are more common than arable.

The arable land of Westmorland is mostly confined to the valleys, once known for turnips. Manufacture in Westmorland was confined principally to Kendal (woollens), Milnthorpe and their neighbourhoods.

The early 19th century saw the region gain fame as the Lake Poets and other artists of the romantic movement, such as William Wordsworth and Samuel Taylor Coleridge, were inspired by the Lake District, now the largest National Park in England.

The modern administrative county of Cumbria was created in 1974 from the traditional counties of Cumberland and Westmor(e)land, along with the North Lonsdale or Furness part of Lancashire, sometimes referred to as ‘Lancashire North of the Sands’ (and, from the West Riding of Yorkshire, the Sedbergh Rural District).

Exclusive census analysis from the data at TheGenealogist.co.uk reveals that common 19th century surnames in both Cumberland and Westmorland include Graham, Bell, Thompson, Hodgson, Scott, Jackson, Dixon, Nicholson, Richardson, Watson, Atkinson and Harrison; Armstrong, Little, Johnston and Irving were more particular to Cumberland, as were Wilkinson, Airey and Dobson in Westmorland.

Leading data website TheGenealogist.co.uk has a wealth of records for Cumberland and Westmorland. Here is a quick run-down of what you can find (in addition to national collections):