Delve into the news of the Great War

TheGenealogist releases World War 1 newspaper collection showing how the news was portrayed at the time. 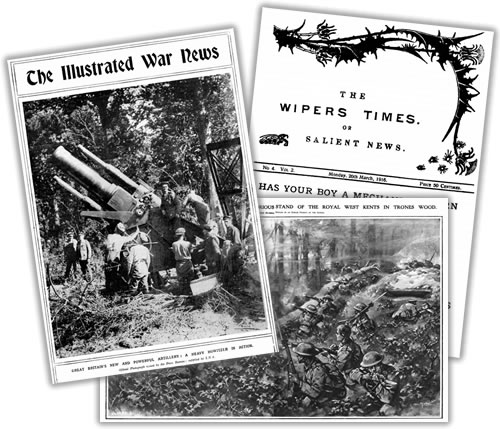 From the famous battles, spiralling casualty rates, increasing use of photography and the use of 'gallows humour' by troops at the front, World War 1 saw a great change in the way news was reported.

TheGenealogist has brought together a number of fascinating newspapers that show how the war was reported in Britain and also how news was spread among the troops. Expanding its current newspaper collection, TheGenealogist has added the complete collection of The Illustrated War News with over 4,800 pages covering the full war years, as well as 192 issues to it's collection of The Illustrated London News for 1914-1918. Combined with the full satirical series of The BEF Times, including The Wipers Times, there's a great selection of newspapers online regarding WW1.

From the beginning of the war, The Illustrated London News and The Illustrated War News published illustrated reports related to the conflict. The newspapers featured articles, amps, photographs and diagrams, and had the largest number of artist-correspondents reporting on the war.

In the earliest battles, correspondents were ordered to withdraw from France by the Secretary of State for War, Lord Kitchener, and censorship was enforced by vetting all letters and telegrams. All the press could do was publicise propaganda, despite the struggles and retreat of the British Expeditionary Force.

Along with illustrations, the papers used photos to show events in more detail. In the photo far left from The Illustrated War News, we see British troops proudly preparing their monstrous new piece of artillery.

"The BEF Times consisted of poems, in-jokes, reflections and lampoons of the military situation the division was in"

New additions to the newspaper collection contain more realistic views of the frontline troops that were subversively published at the time by the soldiers themselves. The BEF Times (incorporating The Wipers Times) was produced by British soldiers of the 12th Battalion Sherwood Foresters (Nottingham and Derbyshire regiment), 24th Division. The editor was Captain Frederick John Roberts MC, and the sub-editor Lieutenant John Hesketh Pearson MC. Both were decorated officers.

The BEF Times consisted of poems, in-jokes, reflections, and lampoons of the military situation the division was in at the time. The name of the publication was altered as the division moved around the Western Front. TheGenealogist has a comprehensive collection of this publication, even The Better Times, the final issues produced at the end of the war that emerged after a break in publication due to the German offensive in 1918. Left we see the March 1916 issue of The Wipers Times, advertising the new German flamethrower – the “Flammenwerfer” – as a great children's toy!