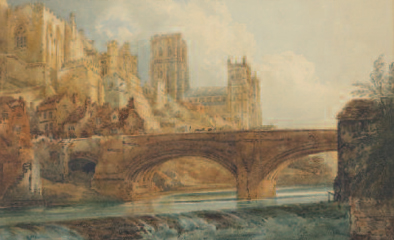 The small north-eastern city of Durham has its origins in late Saxon and Viking times. In the year 995AD, a group of monks from Lindisfarne decided to move the body of St Cuthbert (634-687), the prime figure of Northumbrian Christianity who had been bishop of Lindisfarne, from Chester-le-Street to the strategic safety of what is now called the Durham Peninsula.

The spectacular architecture of both the castle, started in 1072, and the cathedral, founded in 1093 and finished in 1133, were effectively William I and his son planting a huge flag in this part of the country, also sending a message to the Scots. The cathedral itself was also architecturally innovative, being the first major building in northern Europe to use pointed arches, paving the way for the heights of the Gothic era which followed.

Another Norman innovation was to give the Bishops of Durham special status – as prince bishops (a term used until the 19th century) they had unique powers which gave them control of the lands between the Tyne and the Tees, raising both taxes and armies to police the area south of the Scottish border with great success: Durham saw numerous attacks, particularly in the 14th century (culminating in the Battle of Neville’s Cross in 1346), but none was successful in breaching the castle. This special status is why the Durham region is still known as a ‘county palatine’.

Durham was another of England’s walled cathedral cities, all the more impregnable for its position. A few vestiges of the walls and gates remain, particularly to the south of the peninsula, but the last of the gates, the Great North Gate, was finally demolished in 1820.

In the English Civil War, Durham was loyal to the Royalist cause, and Charles I paid two visits to the city. Cromwell, meanwhile, in 1650 used the cathedral as a prison for 3000 Scottish soldiers after the Battle of Dunbar.

Although the heart of this quiet city has loomed large in north-eastern medieval history, the surrounding region was affected more notably by the Industrial Revolution. Durham is very much mining country – the dales to the west of the city have been home to some of the country’s richest lead ore and coal seams. The county record office in Durham has extensive collections relating to coal mining in particular (see also Durham Mining Museum’s index at www.dmm.org.uk/mindex.htm). Durham meanwhile became home to the Durham Miners’ Gala from 1871, known as the Big Meeting, and which today is the largest social trade union event in the world. This industrial heritage also gave the wider county important status in the development of the railways.

The geography of the city itself left it largely immune to industry (other than many of its people working in mining), although there were hopes in the 18th century to turn it into an inland port – these were scuppered by the rise of Sunderland as a major shipping port. However, Durham was at least a centre of carpet weaving from medieval times; clay pipes and organs have also been made in the city. And it was known for mustard manufacture in more modern times, thanks to a Mrs Clements who set up her factory in Saddler street in the 18th century.

The powers of the prince bishops were finally curtailed by the Great Reform Act of 1832, although the last of the line to hold this title, William Van Mildert, left his mark by being instrumental in the founding of the University of Durham in the same year.

Leading data website TheGenealogist.co.uk has a wealth of records for Durham and its county. Here is a quick run-down of what you can find (in addition to national collections):