Over 1.3 million records from daily and weekly WW1 casualty lists are released

From war poets to the friends and colleagues in the 'Pals' Battalions, the battlefields of World War 1 generated a previously unimaginable stream of wounded servicemen. You can now easily find them with this latest release from TheGenealogist.

Covering servicemen of all ranks, from every walk of life, the new comprehensive casualty records cover every year of World War 1. If your ancestor became one of the many casualties, they should feature in the new online records. Alongside the name of the injured servicemen is their regiment, rank, the date they were registered as a 'casualty' and often their hometown or place of enlistment.

In the new records online we find Harold Macmillan, a former British Prime Minister who fought with the Grenadier Guards in WW1. In September 1915 at the Battle of Loos he was shot in the hand and received a glancing bullet wound to the head, ending up in hospital back in Britain. A year later he returned to the front for the Battle of the Somme, where he was again wounded. This time it was severe and he spent an entire day lying in a trench with a bullet in his pelvis. We can find both casualty records for Macmillan in the new records.

"The Scottish troops, facing a thick cloud of chlorine gas, were hesitant to attack but Piper Laidlaw climbed out of the trench and, under fire, began playing to inspire the troops until they resumed attack. He was wounded in both legs but carried on playing for as long as he could. His casualty record is on TheGenealogist" 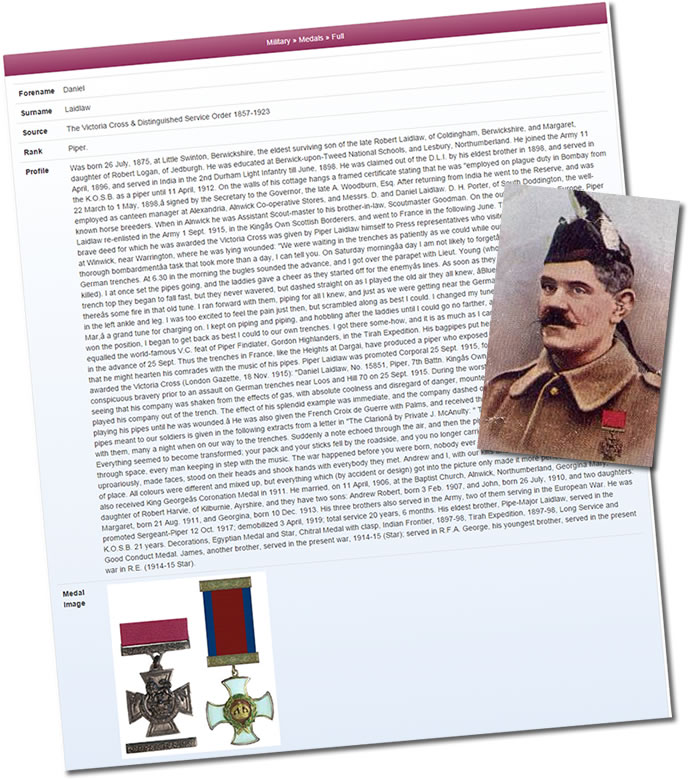 Another in the new casualty records is Daniel Laidlaw, a career soldier from Little Swinton in Berwickshire, who rejoined the army aged 40 as a piper in the 7th Battalion, the King's Own Scottish Borderers, 15th (Scottish) Infantry Division. At the Battle of Loos, the Scots, facing a thick cloud of chlorine gas, were hesitant to attack but Piper Laidlaw, under fire, began playing his pipes to inspire the troops and they successfully resumed the attack. He was wounded in both legs but carried on playing for as long as he could.

These new records also feature TheGenealogist's unique 'SmartSearch' feature, which looks for other military records on the site. Many of the wounded servicemen received medals for their actions and with a few mouse clicks you can discover if your ancestor received any commendations. As we can see opposite, the SmartSearch reveals Laidlow's actions earned him the VC.

War poet Siegfried Sassoon also features in the new casualty records. He transferred to the 3rd Battalion (Special Reserve) of the Royal Welch Fusiliers as a second Lieutenant in May 1915. In November, he was sent to the 1st Battalion in France. He was wounded by a German sniper during a raid near Fontaine-les-Croisilles in April, as we find his wounded record published on the 27 April 1917.