Sir Winston Leonard Spencer-Churchill, KG, OM, CH, TD, DL, FRS, RA is one of the most famous British statesmen who was also well known for being a writer, and artist. Prime Minister of the United Kingdom from 1940 to 1945 and again from 1951 to 1955, Churchill was the son of an aristocrat and his American heiress wife. Winston Churchill married the equally aristocratic Clementine Ogilvy Hozier, the daughter of Lady Henrietta Blanche and Col Henry Hozier, though questions about her paternity have often been raised over the years. What is known is that the Hoziers divorced when Clementine was only six. From the Who’s Who 1897 records on TheGenealogist we can find that Clementine’s mother was the daughter of the Earl of Airlie. Lady Henrietta Blanche Ogilvy also appears in several of the volumes of the Blood Royal from within the Peerage, Gentry & Royalty collections on TheGenealogist site as well as in their Peerage, Baronetage, Knightage of the British Empire 1880 records.

The announcement of Clementine’s wedding to Winston was looked down on by many in British high society; former British Prime Minister Lord Rosebery had reputedly given the marriage six months. Searching the Marriages index records on TheGenealogist we are able to see that the couple married in the St George, Hanover Square district of London in the 3rd quarter of 1908.

Born in a palace

Winston, we can find in the BMD records, was born in 1874 and using the details provided on TheGenealogist we could go on to purchase a copy of his birth certificate from the GRO. His actual birth took place on the 30 November 1874, in a bedroom in Blenheim Palace, Woodstock in Oxfordshire. This was the seat of his illustrious grandfather, the 7th Duke of Marlborough; his father, Lord Randolph Spencer-Churchill, being the Duke’s third son. If we use the census collection on TheGenealogist to find the family at the time of the 1881 count, we can see that they were at St James’s Place in Westminster. The six year old Winston is, unsurprisingly, a Scholar while his father, Lord Randolph, was a Member of Parliament. His mother’s roots, as an American heiress, are recorded in the census by her place of birth being put down as New York.

Clementine Churchill’s Mother, Lady Henrietta, is listed in the 1897 edition of Who’s Who

The young Spencer-Churchill, as he was known then, entered Harrow School in 17 April 1888. By searching the Educational records on TheGenealogist we are able to find his entry in the Harrow School Registers. This gives us many pointers to his military and subsequent political career. What it doesn’t reveal is that after Churchill left Harrow in 1893, he applied to attend the Royal Military College, Sandhurst. He showed his bulldog determination after failing twice before finally passing the entrance exam. 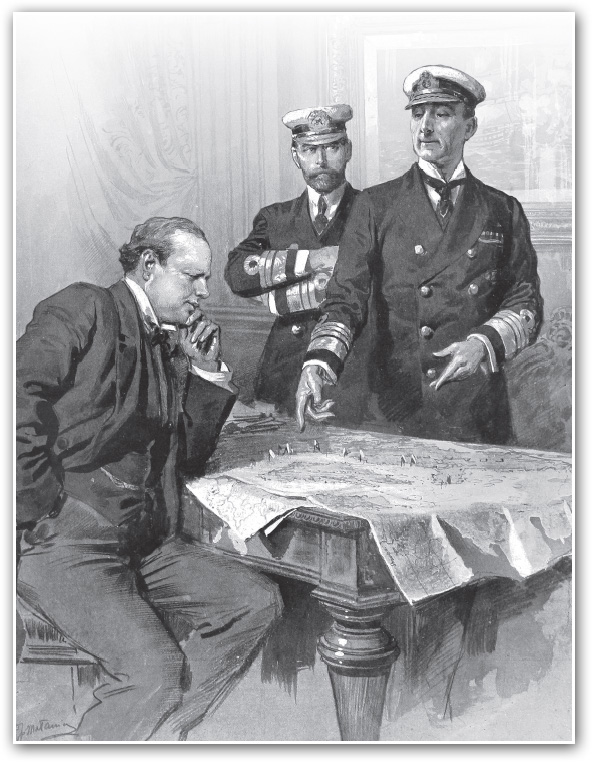 The First Lord with his two highest executive officers

The school register does point us towards a period in his life when Winston Churchill was captured, but escaped while working as a War Correspondent for the Morning Post. To add to this story we can look within the passenger lists, on TheGenealogist. There we can find the passage of the Dunottar Castle from Southampton to Cape Town in South Africa on the 14 October 1899. One of the passengers was the young Winston Churchill who, at that time, was a member of the Press and was going out to report on the start of the Second Boer War. Two days before his ship’s departure the war had broken out between Britain and the Boer Republic. At the news of this conflict Mr Churchill had obtained a commission to act as a war correspondent for the Morning Post newspaper. In return he was to be paid £250 a month for his services, making him one of the best remunerated in this profession at that time. 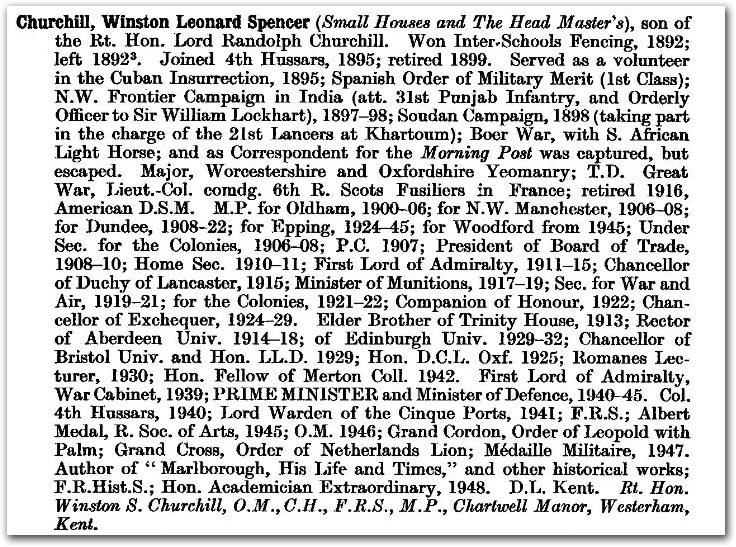 Churchill in the Harrow school register

After spending a number of weeks in the Colony Winston managed to get himself onto an armoured train, loaded with British soldiers, performing a reconnoitre between Frere and Chieveley in the British Natal Colony during November 1899. A Boer commando force, however, had placed a big boulder on the track and the train crashed into it. The Boers, having succeeded in stopping the train, then opened up with their field guns and rifle fire from a vantage position. There was a fight and a number of the British were taken prisoner, including Churchill. After being held captive for about four weeks in a POW camp in Pretoria, he escaped on the evening of 12 December 1899 by vaulting over the wall to the neighbouring property and taking flight. 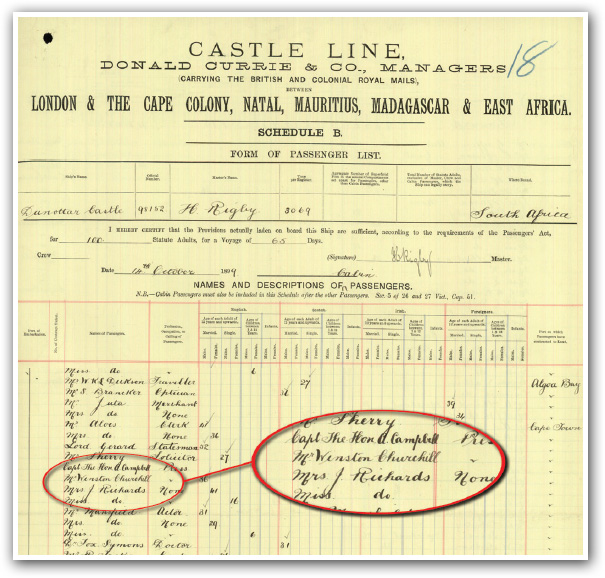 Rise and fall from Government

We know from the timeline in the Harrow School Register that Winston became an MP rising to become the Home Secretary by 1910. In 1911 he would take the Cabinet position of First Lord of the Admiralty. Looking at the census of 1911 we can find him and Clementine at 33 Eccleston Square in Belgravia. His occupation is recorded there as One of His Majesty’s Principal Secretaries of State. As would be expected for someone of such prominence, Winston appears in many articles published at the time. TheGenealogist has an extensive collection of newspapers and magazines for researchers to search within. One such newspaper is The Sphere for May 22nd 1915 which reveals, however, that not all was plain sailing for the great man as he moved in the corridors of power. The paper reports that there was no room in the same office for Churchill, the First Lord of the Admiralty and Lord Fisher, who was the head of the Permanent Administration in the Admiralty Board. The two men, once friends, were no longer able to work together and Mr Asquith the Prime Minister was forced to reshuffle his Cabinet. Within a few months of that year, Winston took the next step and resigned from the Cabinet altogether. He was reported as not wanting to accept a position of responsibility for war policy without any influence on its shaping or control. Being blamed as one of the architects of the disastrous Gallipoli fiasco he left the government and rejoined his regiment. 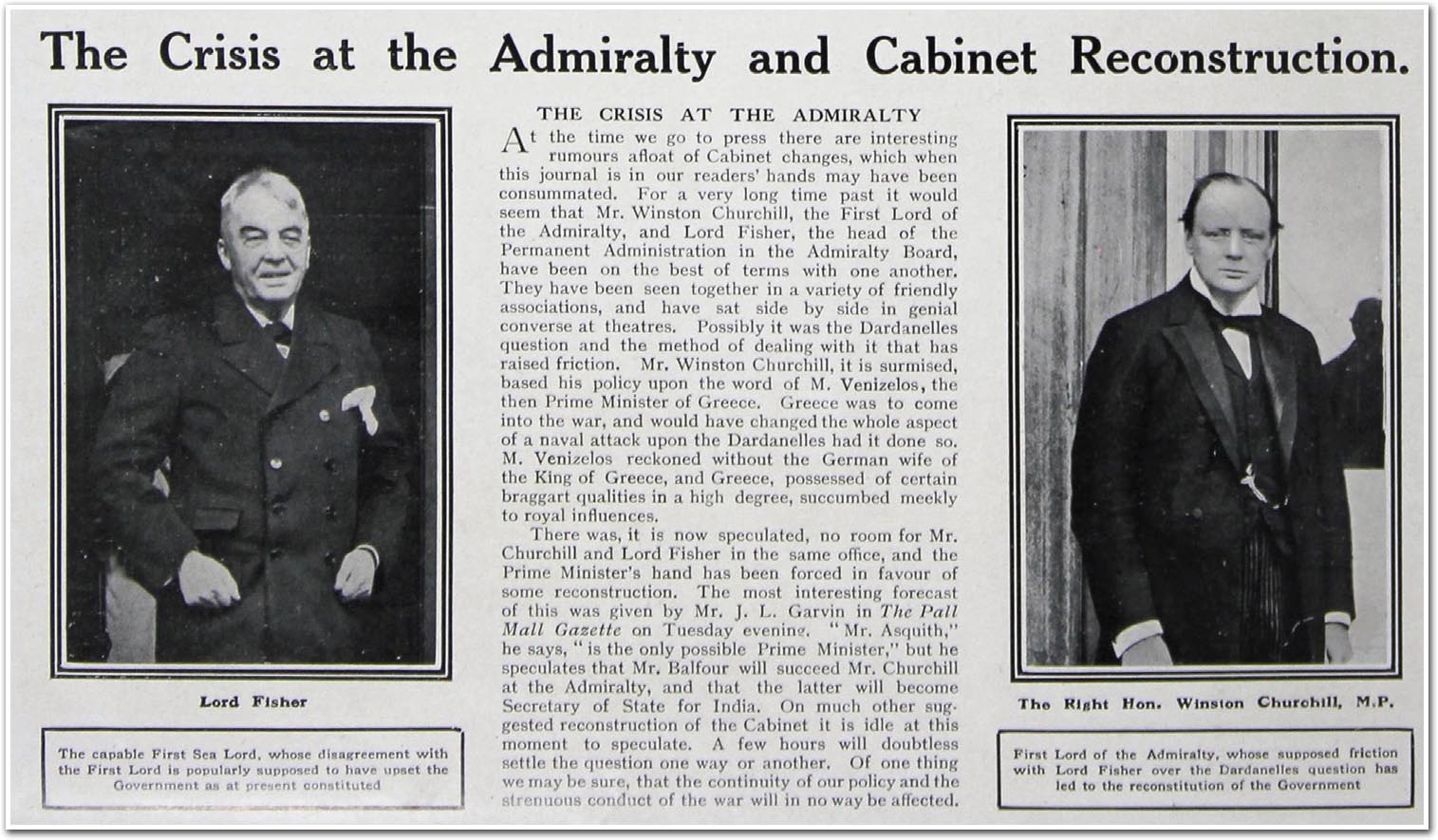 The Sphere May 22 1915 on TheGenealogist