From Longleat to the Tower of London

Online records can prove invaluable for historical research. Here, Nick Thorne delves into the history of Longleat and its illustrious inhabitants

Many of us have grown up knowing at least something about Longleat, even if we have never visited the place. Perhaps it is the Lions and the safari park that we are most aware of. Or it could be the colourful present Marquess of Bath that we most associate with the house? Recent television exposure of the country house, the family and the estate may have brought the interesting house and its estate back into our mind. Longleat House itself is an English stately home that is a leading and early example of the Elizabethan ‘prodigy house’. Built by Sir John Thynne, after the original priory on the site caught fire in 1567. Longleat had been purchased in 1541 for £53 on behalf of Sir John who had become the steward of the once powerful Edmund Seymour, the 1st Duke of Somerset and a member of parliament.

Thynne’s master was the Duke of Somerset, the brother of Jane Seymour, Henry VIII’s third wife. On the death of the king, Somerset was made the Lord Protector of his nephew, the young King Edward VI. But soon Somerset was accused of ill-government by powerful opponents in the court and he fell from grace, being beheaded on 22 January in 1552. Thynne himself spent some time in the Tower of London as a result of his close ties to Somerset, but was eventually released and allowed to return to Longleat. Sir John Thynne died in 1580. By researching him in the records at TheGenealogist.co.uk, his last will and testament can easily be found by selecting PCC Wills Indexes and Images and entering his name into the search boxes. 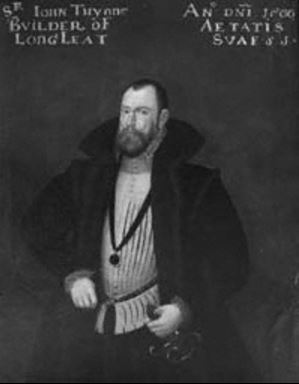 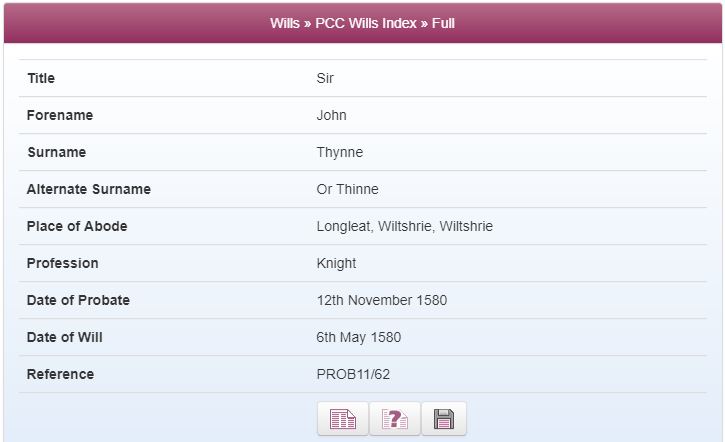 Index entry for Sir John’s will

The official will of Sir John Thynne

With a single click we can then see an image of the actual document (above). The 1580 will is written in Latin, as many wills were this early on, and so may be a little difficult for us to interpret. Researching Sir John Thynne’s life further using TheGenealogist, we can see that he re-established the family’s good fortunes when he married Christian in 1549, the wealthy daughter of the Lord Mayor of London, Sir Richard Gresham; she was a sister of Sir Thomas Gresham who was the founder of the Royal Exchange. Searching for John Thynne within marriages on TheGenealogist, we can discover the knight’s application for a marriage licence in the records. After seven generations, Sir John and Lady Thynne’s descendants were destined to be raised to the title of the Marquesses of Bath when under George III, in 1789, the third Viscount Weymouth was made the 1st Marquess of Bath. Today, Alexander George Thynn, who was born in 1932, is the well known and colourful 7th Marquess. TheGenealogist website has a great collection of Illustrated London News editions which can be searched by keyword. Entering “Longleat House” returns us several results including the 5 February edition of 1887.

This article gives a very comprehensive review of the house and its grounds as they were in that year (see previous page). Researching the house in the 1851 census and using the very useful address search feature of TheGenealogist we find only a skeleton staff on hand in the great house, including the House Steward, William Belcher. There is no sign of the Marquess or the Marchioness in this count and while there are other people in the employ of Lord Bath, living in the stables and various other premises on the estate, on census night 1851 only six are in the huge building that is Longleat House. This paltry number compares with 26 servants enumerated within the house in 1871 when the Marchioness of Bath, Fanny Thynne, was in residence with her five children who are all under the age of nine. The 1911 census gives us the interesting fact that there were 92 rooms including the kitchen, but excluding the scullery, landings, lobbies, closets and bathrooms in Longleat House and there were only 4 males and 14 females in residence for that census. All of those counted were servants and the family are not in the house.

Longleat House, the seat of the Marquesses of Bath, is as enduring a part of the English countryside today as it was when it first was built by the present owner’s great-x11-grandfather. In the 1960s the 6th Marquess, father of the present Lord Bath, was looking for a way to help finance the Longleat estate. His solution was to open the Longleat Safari and Adventure Park in the grounds of the house in 1966. The safari park was the first of its kind anywhere in the world being considered as a tremendous breakthrough in the way in which captive animals were kept. The lions, wolves and all the other animals roam freely in their areas, while the visitors are in effect ‘caged’ in their motor cars.With the news that Ceawlin, the present Viscount Weymouth, and his wife Emma have produced a son and heir in 2014 it seems likely that the future of the family associated with Longleat since the 1500s will continue for some time to come. 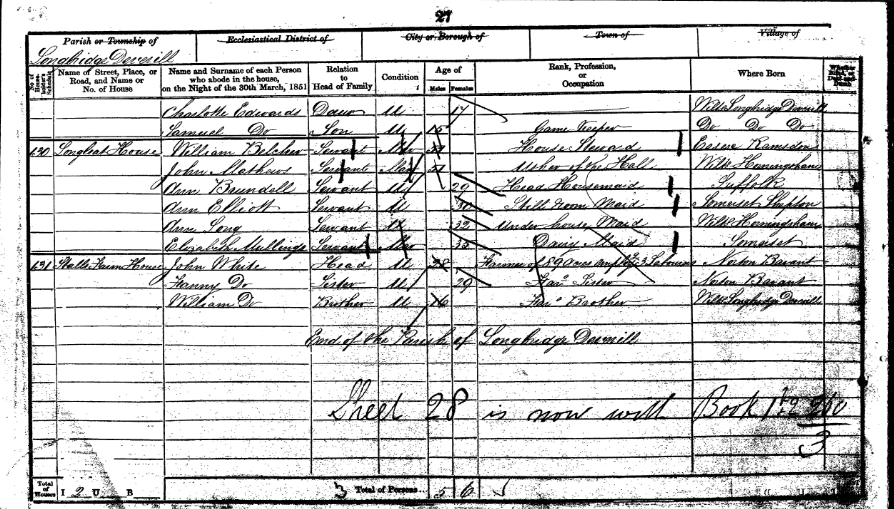 Staff present at Longleat House on census day in 1851