From One Type of Bank to Another 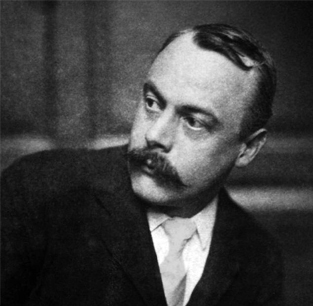 Kenneth Grahame was born in Edinburgh, Scotland on 8 March 1859; tragically, as a young child of four, he lost his mother when she died of Scarlet fever. His father, James Cunningham Grahame, an advocate in the Scottish courts who had taken an appointment as a sheriff-substitute in Argyllshire, was distraught and unable to cope.

With the loss of his mother, and his father seeking consolation in alcohol and unable to bring up Kenneth and his three siblings, the young boy was sent away to be looked after by his maternal grandmother, who lived in the south of England. The location of Granny Ingle’s house, named The Mount, was to the south of Cookham Dean in rural Berkshire. A stone’s throw away from the banks of the River Thames as it flows through the picturesque countryside, Cookham Dean would be the inspiration for the scene of his best remembered book The Wind in the Willows.

A search of TheGenealogist’s Map Explorer for Cookham Dean, and using the Ordnance Survey 1893-1900s historic map layer, finds the property neatly identified with its name. Selecting the Hybrid Satellite map as the modern map and then sliding the transparency control allows us to see that even today it is still a very pastoral area, even though there have been some new housing developments built in various pockets nearby.

Using the Educational Records on TheGenealogist finds the entry for the novelist’s father, James, recording his time at Cambridge University. It also provides the name of Kenneth Grahame’s grandfather as Archibald Grahame, of Englefield Green in Surrey. Grahame’s father, James Cunningham Grahame, had been born in Glasgow.

We can also use the Educational Records to find the school register for the author’s public school, St Edward’s School in Oxford, where it is said he was an excellent student. Despite his educational promise, however, his uncle, who was responsible for financing the four children’s care, didn’t want to pay the fees for Kenneth to go to Oxford University. That being the case Kenneth had to go to work and found employment at the Bank of England as a clerk.

Shot at three times inside the Bank

Kenneth Grahame’s position at the institution known as the ‘Old Lady of Threadneedle Street’ must have suited his talents because he later rose to be the Chief Secretary at the Bank of England. This we can find from looking at the 1900 Solicitors Diary Almanac Directory in the Occupational Records on TheGenealogist. The famous children’s author was to spend all his working life in the employ of the Bank, while in his spare time he wrote articles and light stories published in London periodicals. One of his later books, The Reluctant Dragon, became widely known, but it is for The Wind in the Willows that he is best remembered today. It was first published in 1908, the year he left the Bank. 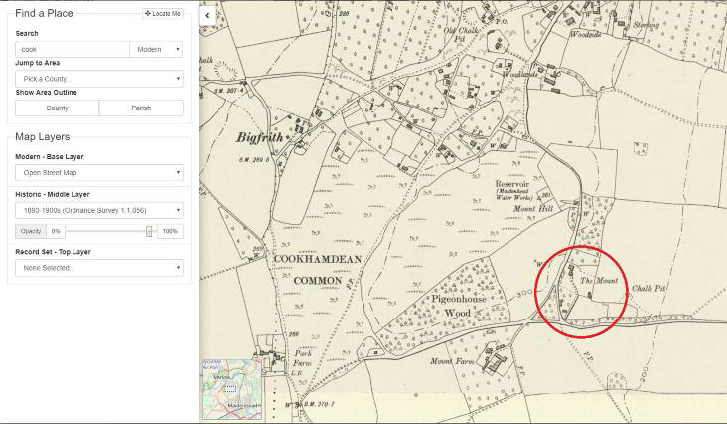 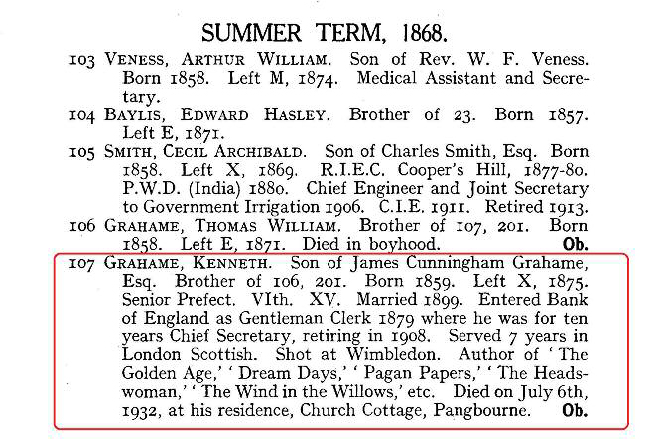 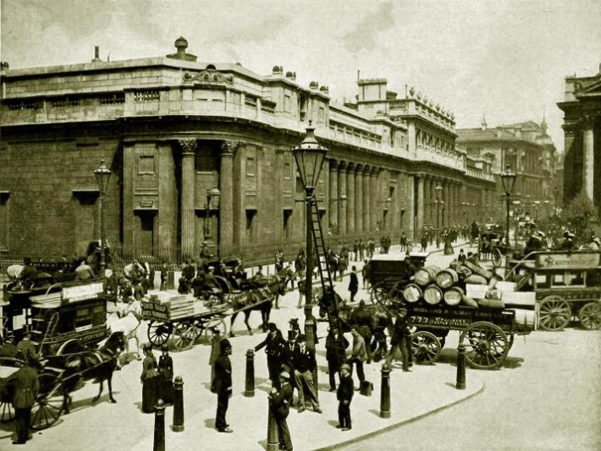 The Bank of England from the Image Archive on TheGenealogist 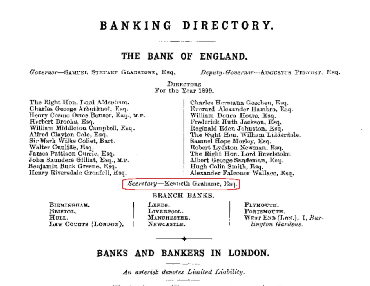 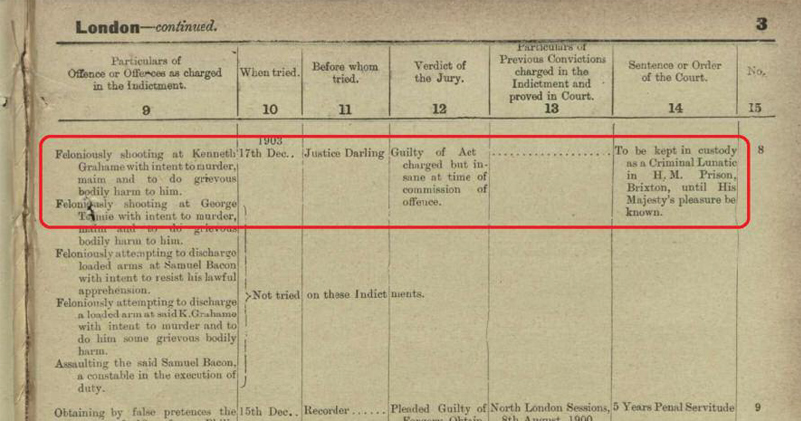 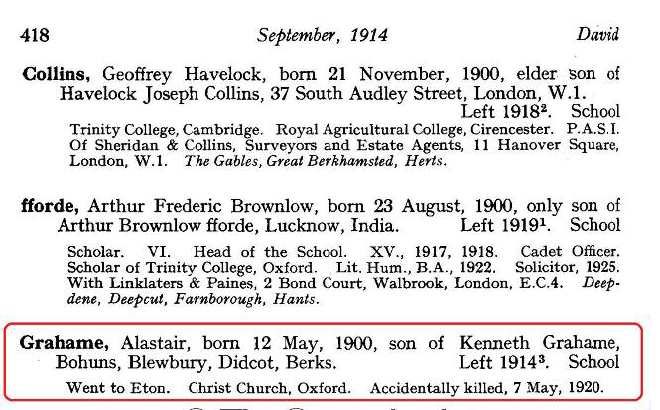 Grahame’s son, Alistair, in the Rugby School Register 1892-1921 on TheGenealogist

Some years before leaving the Bank, however, he was dramatically caught up in a shooting where three shots were fired at him. It was 24 November 1903 and a man named George Robinson entered the Bank of England asking to speak to the governor, Sir Augustus Prevost. As Sir Augustus had retired several years earlier, Robinson was asked if he would like to speak to the bank secretary instead. Grahame was called and Robinson approached him, holding out a rolled up manuscript. The scroll was tied at one end with a white ribbon and at the other, with a black one. Asking Grahame to choose an end, Grahame hesitated, but chose the end with the black ribbon. At this, Robinson pulled out a gun and shot at the secretary three times. All of the bullets missed and several bank employees rushed at Robinson and wrestled him to the floor, where he was subdued with the aid of a fire hose being turned on him. We can find a record of the subsequent case using the criminal records on TheGenealogist where Robinson appears at the Central Criminal Court and Kenneth Grahame is the victim. The hapless Robinson was found guilty, but insane, and so he was placed in custody to be held at His Majesty’s pleasure without a release date.

Exchanging ‘The Bank’ for the river bank

In 1908, Grahame retired from his position as the secretary of the Bank of England. Freed from his duties he moved back to Berkshire, where he had lived as a child, and spent his time by the banks of the River Thames. Now he was able to do much as his book characters, the four anthropomorphised animals of Mole, Rat, Toad, and Badger, had done: messing about in boats on the river. Grahame also could devote time to augmenting the bedtime stories that he had told his son Alastair and write them up into a manuscript for the book.

In 1899, Grahame had married Elspeth Thomson, but the marriage was not particularly close. The couple did, however, have one son together, named Alistair. Accounts say that the boy suffered from various psychological conditions and Alistair would later commit suicide at the age of 20, while studying at Oxford University. This was tactfully recorded in the Rugby School Register when they published that their former pupil had been ‘Accidently killed, 7 May, 1920’. The school register is available in the Educational Records on TheGenealogist.

Kenneth Grahame had begun writing the fictional stories for Alistair, when the boy was a young child, with the aim that the tales should be educational for his son. For this reason, one of the main characters in The Wind in the Willows, Toad of Toad Hall, is portrayed as arrogant and somewhat headstrong so as to teach Alistair about how to behave.

At the time of the census in 1901, and seven years before his retirement, Kenneth and Elspeth can be found in the records living at 16 Durham Villa in London’s Kensington with their 10-month-old son. There was also a nurse, a cook, a lady’s maid, a parlour maid and a housemaid living in the house. By the 1920s, and using TheGenealogist’s 1921 census substitute, we can identify that the Grahames are now living at a property called Bohams in Blewbury, Berkshire. This was also the address given by the author in the Lloyd George Domesday Survey for a property in Kensington that he part owned with his brother-in-law, Sir Courtauld Thomson, and the barrister AB Shaw Esq. From the records we can see that the house at 52 Pont Street was let to a CHS Whitburn. Their three-person consortium also owned some ‘garages and rooms’ at 26 Pont Street Mews.

By using TheGenealogist we can find that when the next census was taken Mr and Mrs Grahame and their son were staying at a hotel in Fowey, Cornwall. In the next decade, by using the passenger list records on TheGenealogist, we are able to follow the Grahames as they travel to Naples, Italy in 1926 and then to Genoa in 1927. The passenger list now gives their address as Church Cottage in Pangbourne, Berkshire – this was his last home and was where he died on 6 July 1932 aged 73.

TheGenealogist has a broad range of records for researching your family history and we have put a diverse number of them to use in this piece researching the famous writer of The Wind in the Willows. 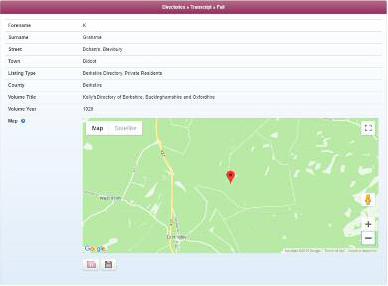 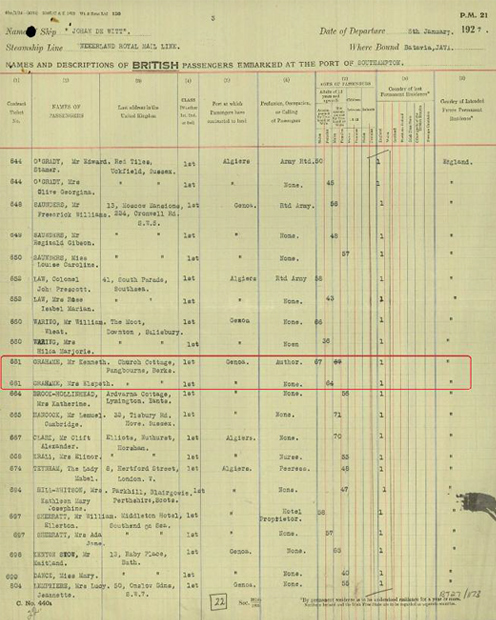 Passenger list including the Grahames’ visit to Genoa in 1927