From Store to War

TheGenealogist now has more than 650,000 records of soldiers who died in WW1 – here we use records of Harrods staff in the collection to learn more.

Popular data website TheGenealogist.co.uk has released more than 650,000 records of 'other ranks' who died in World War One, taken from War Office Publications. The new records further enhance the already significant military collections available at the site, which include Roll of Honour records, unique casualty lists, prisoner of war records, regimental records and war memorial lists – making it the perfect place to start researching your ancestors who fought a century ago.

You can now see a large amount of detail for those who fought and fell in the line of duty. Records can include the full name, birth place, place or residence, place of enlistment, service number, regiment and rank along with the date, place and cause of death. In most cases there is also a link to the Commonwealth War Grave Commission (CWGC) website for more information.

Using a wide range of sources, many of them unique to TheGenealogist, the continually expanding pool of military records allows you the opportunity to discover more about your military ancestors.

Among the many men who made the ultimate sacrifice and are listed in this data are soldiers who had previously worked for one of the world's most famous department stores. Established in 1824 by Charles Henry Harrod, the main Harrod's store is still situated where Charles set up a small shop in Brompton in 1849 to capitalise on the forthcoming Great Exhibition of 1851. Despite the setback of a fire in 1894, Harrod's went from strength to strength. Clientele ranged from Oscar Wilde, Charlie Chaplin and Noel Coward, Sigmund Freud to members of the British Royal Family. 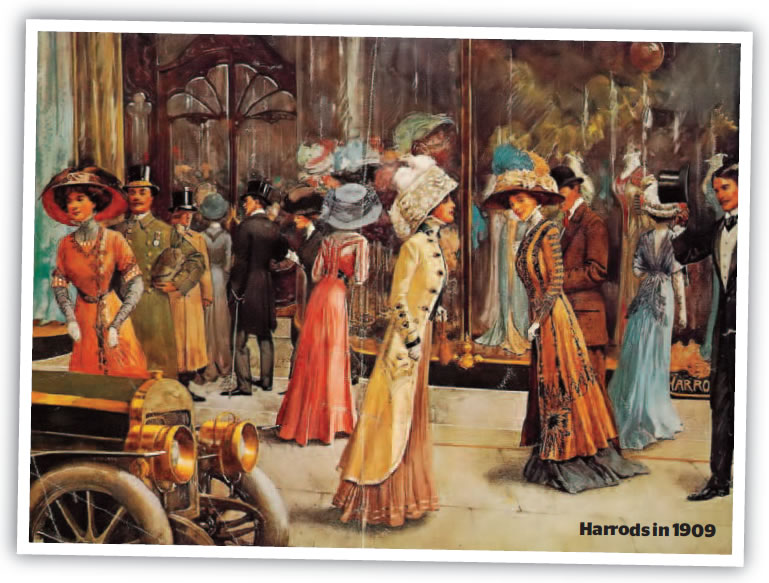 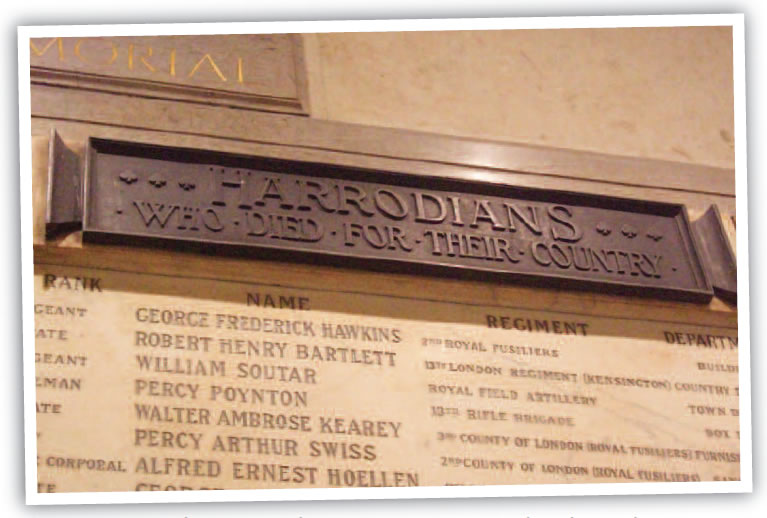 The war memorial tablet on display at the Harrods store in Knightbridge, London

By the outbreak of World War One, Harrods had firmly established itself as one of the premium department stores in the world, competing particularly with Selfridges. With a large workforce on the sales floors, packing and support departments, it was inevitable many of the young male workers would answer the call for volunteers or be conscripted into the armed forces by 1916.

Many of the Harrods workers subsequently joined the war effort and sadly many were not to return to their jobs. A total of 147 Harrods employees made the supreme sacrifice and are now commemorated on the four war memorial tablets on display in the store. These can now be viewed online in the unique War Memorials collection at TheGenealogist.

The new 'Soldiers who died in the Great War' records published at TheGenealogist give us a great amount of detail about the brave 'Harrodians' who gave their lives serving their country.

For example, Arthur Brocks was a 'Harrodian' who worked in the bedding department and would have still have been a junior learning the retail trade when war intervened. Searching the Military Records at TheGenealogist and the new 'Soldiers who Died in the Great War' collection, we find Arthur's details listed.

With one mouse click on the results page we are able to view where Arthur is commemorated, thanks to a unique link to the Commonwealth War Graves Commission. We find him on The Arras Memorial, which bears the names of more than 35,000 officers and men of the United Kingdom and South African and New Zealand forces who died in the Arras sector of the Pas-de-Calais between the Spring of 1916 and 7 August 1918 and have no known grave. The memorial commemorates the large Arras Offensive in 1917 in which Private Arthur Brocks of the 3rd City of London Battalion (Royal Fusiliers) was no doubt involved.

Using the unique online resources at TheGenealogist we can then search and find Arthur Brocks commemorated on the Harrod's memorial. One click takes us to an actual image of Arthur's name on the war memorial itself – see the picture above.

Adjacent to Brocks on the memorial is Arthur Miles. Arthur George Miles form Betchworth in Surry was working in the antiques department at the Harrods store when he joined army. Newly married to Maud, in the 1911 Census (available at TheGenealogist) his occupation was furniture porter and the couple were living in Chelsea.

Arthur joined the Grenadier Guards as a Private or Guardsman in the 1st Battalion. The site's military records show him killed in action on 27 September 1918, nearing the end of the war. Arthur also appears in the Roll of Honour Index found at TheGenealogist.

Despite the tragic loss of the many brave employees who gave their lives in the War, Harrods continued to trade and "business as usual" continued throughout the war. The 'Soldiers Who Died in The Great War' records are now available to view for all Diamond subscribers on the site. 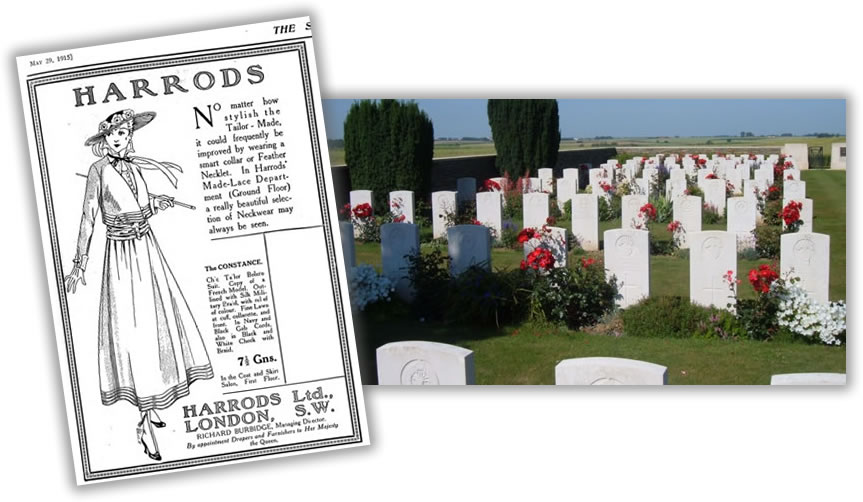 Left: A typical advert found in the Sphere Magazine in 1915, available in the Newspaper collection at TheGenealogist. Right: Sanders Keep cemetery, near Arras.

Many of the Harrodians who saw military service fought on the western front in France and Flanders. However, some were posted to more distant areas such as Harry Topliffe, who was an employee at Harrods when the war started. Harry was born in 1884 in Barnes, Surrey; he worked for Harrods as a delivery man.

Using the military records collections at TheGenealogist, we can search for Harry in the new 'Soldiers Who Died in the Great War' records. We find he sadly died in 1916 while serving as a Private with the Middlesex Regiment in the Persian Gulf.

Harry also appears in TheGenealogist's unique collection of casualty records; showing he was both wounded and captured by the Turks in 1916. He was taken to hospital in Baghdad which was the Turkish headquarters in Mesopotamia.

The casualty records also indicate if a prisoner died in captivity, as unfortunately happened with Harry Topliffe. Harry was buried in the Baghdad (North Gate) War Cemetery that was used by the Turks to bury British Prisoners of War. He was also commemorated on the Harrods War Memorial in London which we can search through the war memorials collection at TheGenealogist. One click leads to the image of the actual war memorial featuring Harry Topliffe, who died aged 32. 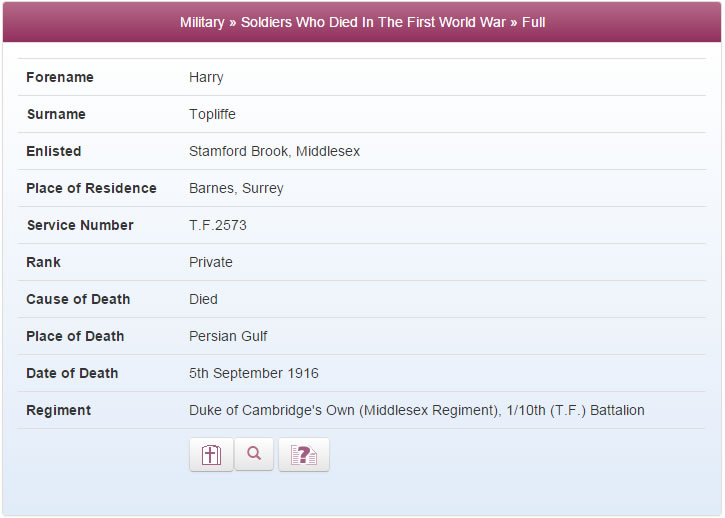 Harry Topliffe in the 'Soldiers Who Died in the Great War' records at TheGenealogist.co.uk (above), and in the site's Casualty Lists collection (below). 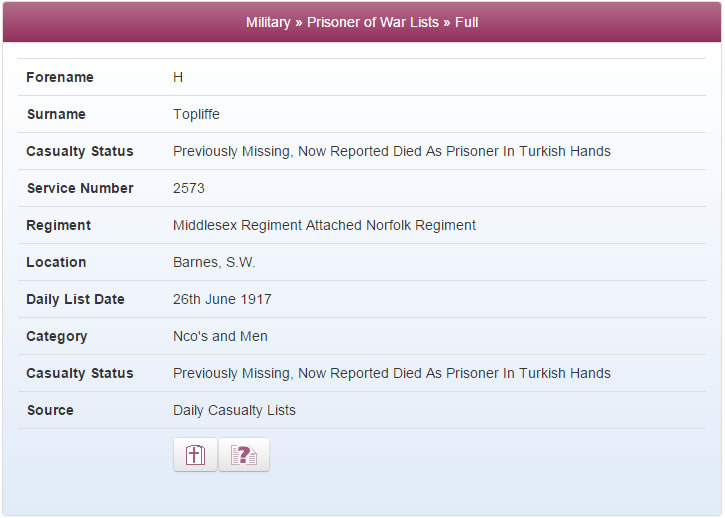 Due to the numbers of staff members killed in WW1, in April 1917 the first memorial plaque, made of marble, was designed and placed in the Harrods Banking Department area known as The Exchange. Here the 'Memorial to Fallen Harrodians' was unveiled in a solemn ceremony with speeches from the then owner, Sir Richard Bainbridge, and Chairman Sir Alfred Newton.

Such was the scale of casualties in the war that Harrods would have to produce a second war memorial for the extra employees who sadly would not survive the war. Sir Alfred Newton summed it up to The Harrodian Gazette in 1917: "The tablet that is exposed to you this evening is unfortunately, not the only momento that will be erected in this place because this ghastly war is summing up the victims day by day and we do not know when that great sacrifice is to come to an end." The second tablet was added in October 1917.

The war memorial and rolls of honour are now on the first floor half landing of the store.