From the West End to a Dreadful End

One of the ways that we can get a better idea of what our Victorian ancestors’ lives were like are to look at newspaper reports and any photographs from the time. Using TheGenealogist we have access to millions of pages of newspapers from 1842 to the time of the First World War and the reports can shed light on what was going on in our ancestors’ world. It can let us see what occupied the press and our ancestors at the time and the illustrations can reveal how towns, cities and other places looked back then. There is also a great Image Archive with many pictures of places and people from days gone by.

Recently, while researching a story in the Navy & Army Illustrated I began browsing the rest of the pages to get a flavour for the times. My eyes came to rest on the report from the theatres in the 1st October 1897 edition. The subject was about how a duel had been portrayed in a play and the writer was reminiscing about two actors who had previously presented a fine example of swordsmanship on the stage. The commentary referred to it being ‘a sad reminiscence’ and that one of the actors was no more ‘and the sad tragedy of the other is fresh in our minds’. My interest was piqued. What was the tragedy that was referred to in the piece but frustratingly not expanded upon?

The actor in question was Mr Arthur Dacre and by returning to the Master Search on TheGenealogist I entered his name and searched the Occupational records until I found a mention of him in the Who’s Who in Theatre 1922. It was documenting his death on the 16th November 1895, almost two years prior to the article published in the Navy & Army Illustrated, but this still didn’t reveal any clues as to the nature of the distressing event. 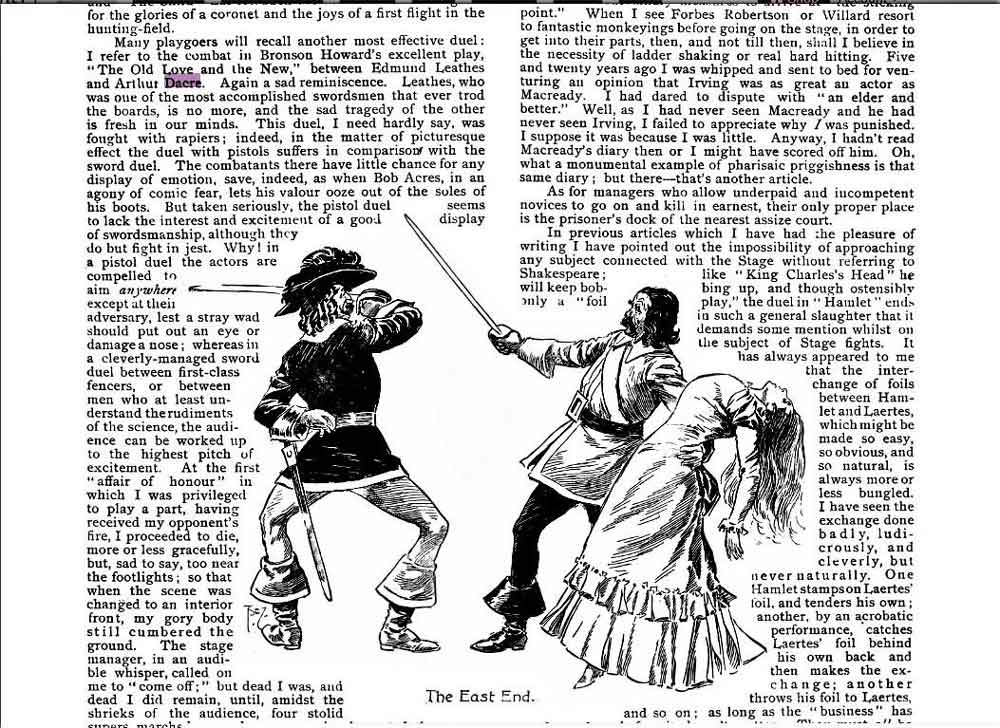 A further search of newspapers on TheGenealogist for Arthur Dacre brought me to a review of a play in The Illustrated London News in 1887. An actress named Miss Amy Roselle was commended for the way she played her scene was attributed by the columnist as having saved the play. Arthur Dacre rated a small mention in the piece but only for having made a ‘capital, manly, and earnest lover.’ At this stage I hadn’t realised that Miss Roselle and Arthur Dacre were actually husband and wife.

The next review I came across was in The Illustrated London News for a play at the Theatre Royal Drury Lane in September 1889. It was decrying the ‘modern form of acting’ where actors were not given training in voice delivery. Poor Arthur Dacre was savaged as ‘not one half, scarcely a quarter of the words he uttered were heard in the second row of the stalls’. Further investigation revealed that Arthur Dacre was not highly rated as a performer, in his time, while Amy Roselle received more praise for her work. 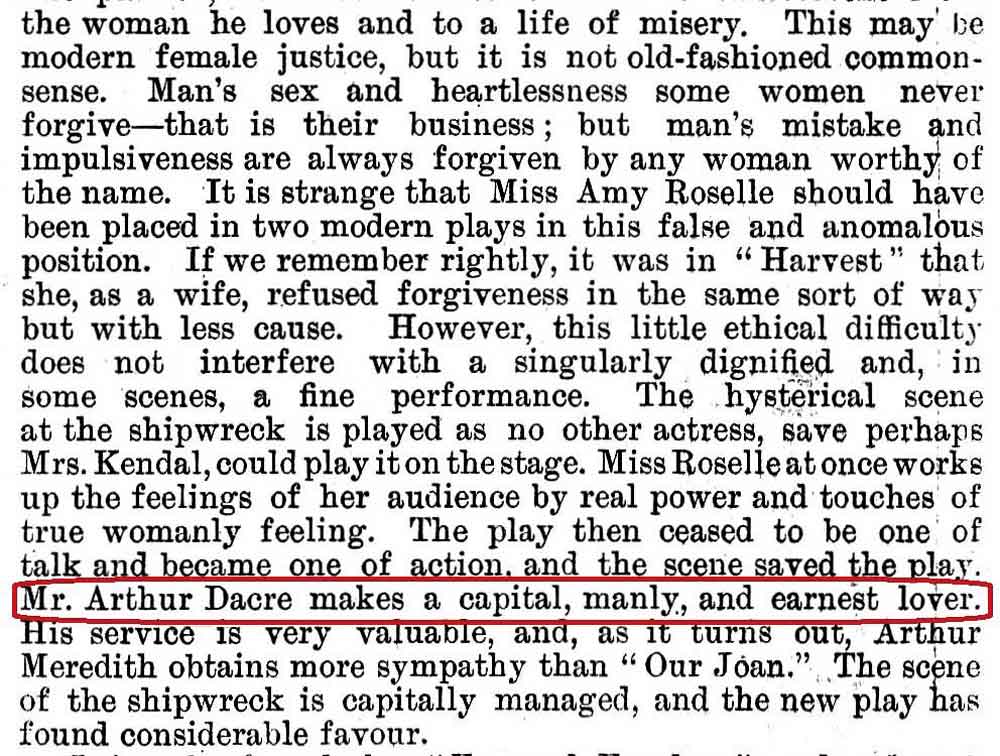 Build a picture of our ancestors’ time

One of the useful tools that I like to use to build a picture of our ancestors’ time is TheGenealogist’s Image Archives with its landscapes, street scenes, churches, military operations and more. We can also use it to discover the ‘celebrities’ of our ancestor’s time by looking at postcards of Actors and Actress circulated among the appreciative public. Using the Image Archive I was able to find the Theatre Royal Drury Lane where Arthur had so mumbled his lines that he could not be heard, according to the newspaper, and I was also able to find a photograph of Miss Amy Roselle in 1887. 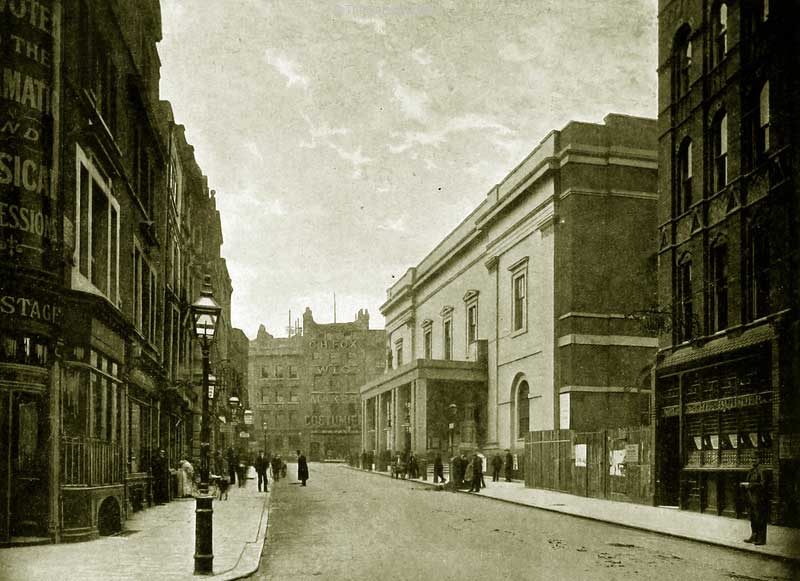 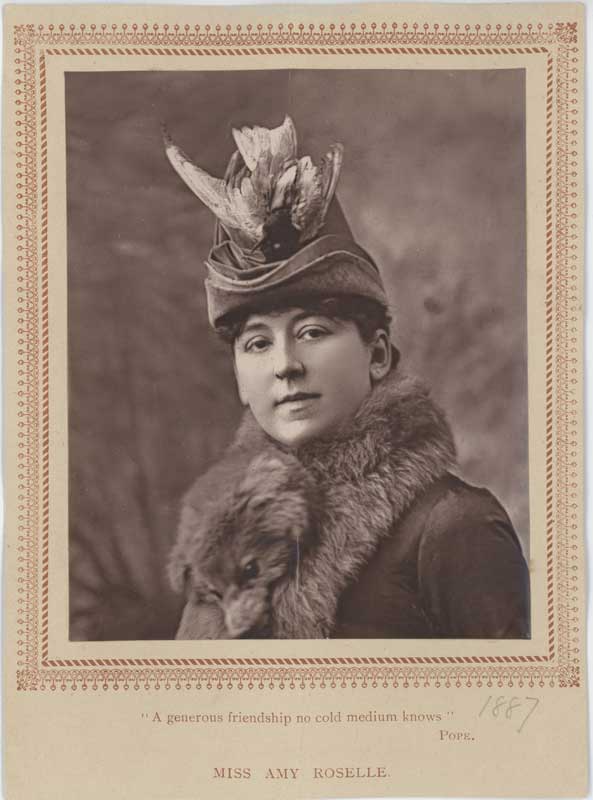 The actress Amy Roselle, shown in 1887

Searching the same Who’s Who in Theatre 1922, as I had done for Arthur, I then came across the Death notice for Amy and was shocked to see that it was exactly the same date as that for Arthur: 16 November 1895. Was this a clue as to the ‘sad tragedy’ referred to in Navy & Army Illustrated ?

With it being the norm for actors and actresses to have a stage name, different from their legal name, I made the assumption that Amy’s surname was probably not Rossell and that Arthur’s was actually not Dacre. This being the case it was going to be difficult to search for them in the official records where their legal name would be used rather than a professional one. The couple appear in the BT27 Outgoing Passenger lists under the names Mr and Mrs Arthur Dacre travelling as cabin passengers to Melbourne, Australia in December 1894. Just under a year later and I knew that they were both dead according to the record that I’d found. 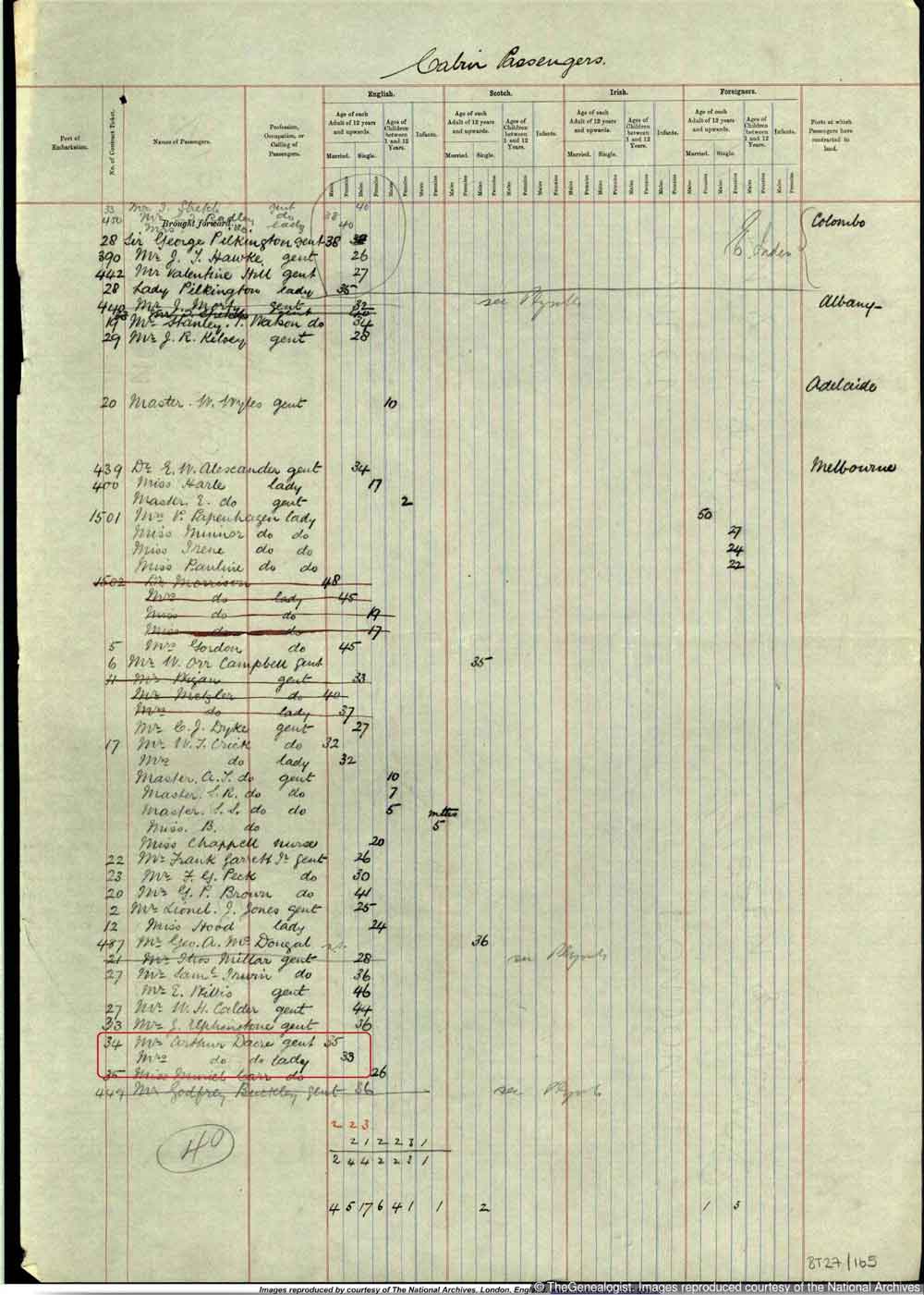 The Dacres' voyage from London to Melbourne in 1894, from TheGenealogist's Passenger List records

Background information, published online, suggested to me that Amy Rossell was the daughter of the headmaster of Glastonbury Grammar School, but it did not reveal her surname or the name of her father. I was uncertain of this lead as I could find no sign of the grammar school listed in descriptions of the town in the historic Trade, Residential & Telephone directories on TheGenealogist. The research did, however, answer the question as to what the ‘sad tragedy’ was. The trip to Australia, that I found in the passenger lists, was as a result of the two being out of work and running up debts in England. The Dacres had then gone out to the colony to try their luck there. Unfortunately for them their fortunes were not to be restored in Australia. In desperation they hit upon the ultimate remedy of a suicide pact and in their lodgings in Sydney, where they were appearing at the Theatre Royal, Arthur shot Amy dead. Not having sufficient bullets left to complete his own death he resorted to cutting his own throat. Apart from the gruesome revelation of the tragedy - that had been alluded to in the piece I had read in The Navy & Army Illustrated and which had first drawn me into finding out more - I now knew Arthur’s surname was James.

Arthur Culver James had studied to be a medical doctor but had then gone on the stage. I was able to find him in the 1871 census as a medical student at 129 Kennington Park Road in St Mary Newington. 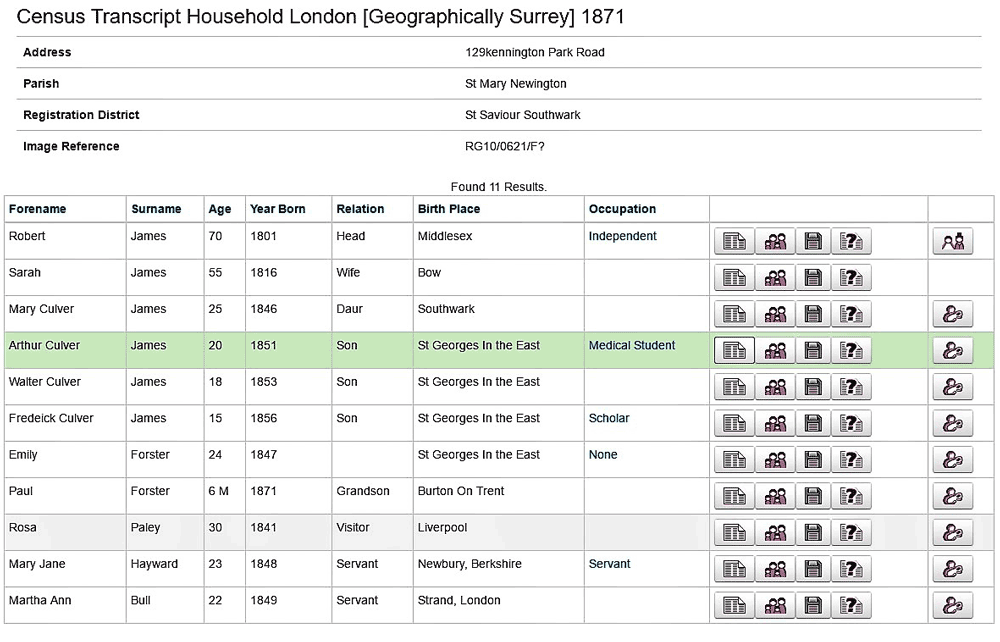 With this I could now look for a marriage between an Arthur Culver James and a bride with the first name of Amy and came across the registration of a wedding in the district of St George Hanover Square in the last quarter of 1884. Amy’s surname was Hawkins. 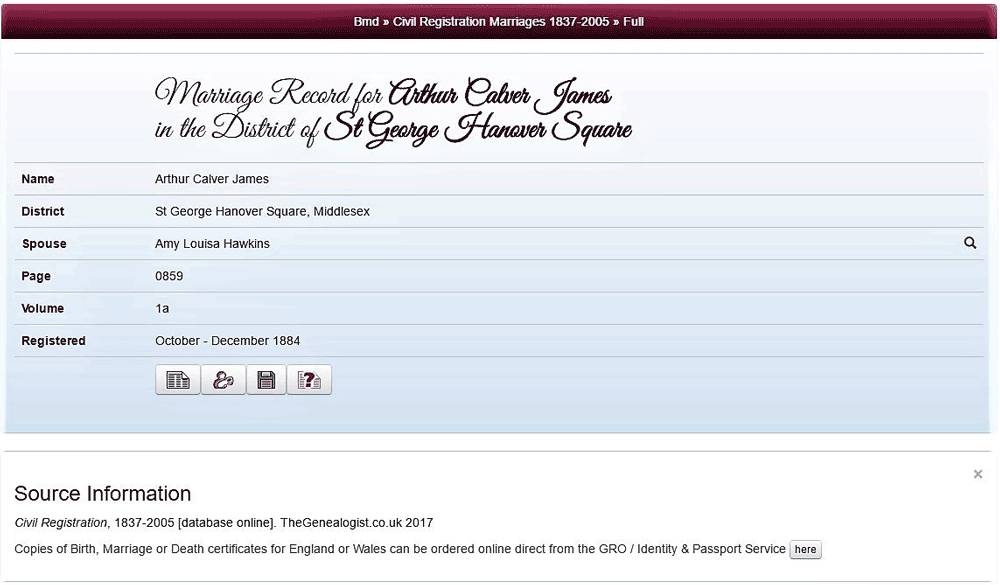 Marriage record for Arthur and Amy Louisa Hawkins in 1884

Now turning back to the census collection on TheGenealogist Amy can be discovered in the 1881 census in her mother’s household in London. She is an actress and her mother is a widowed gentleman’s wife aged 70. Had her husband been a headmaster, as the potted history online had suggested? Using the information about Sarah I was then able to find Sarah Hawkins, her son Frederick and Percy in the 1851. This reveals many more children, some of whom were born in Glastonbury. The head of the household is William, an Insurance Office Agent from Southampton and what is noteworthy was that many of the children had been born in Glastonbury, Somerset where it is claimed her father had been headmaster. 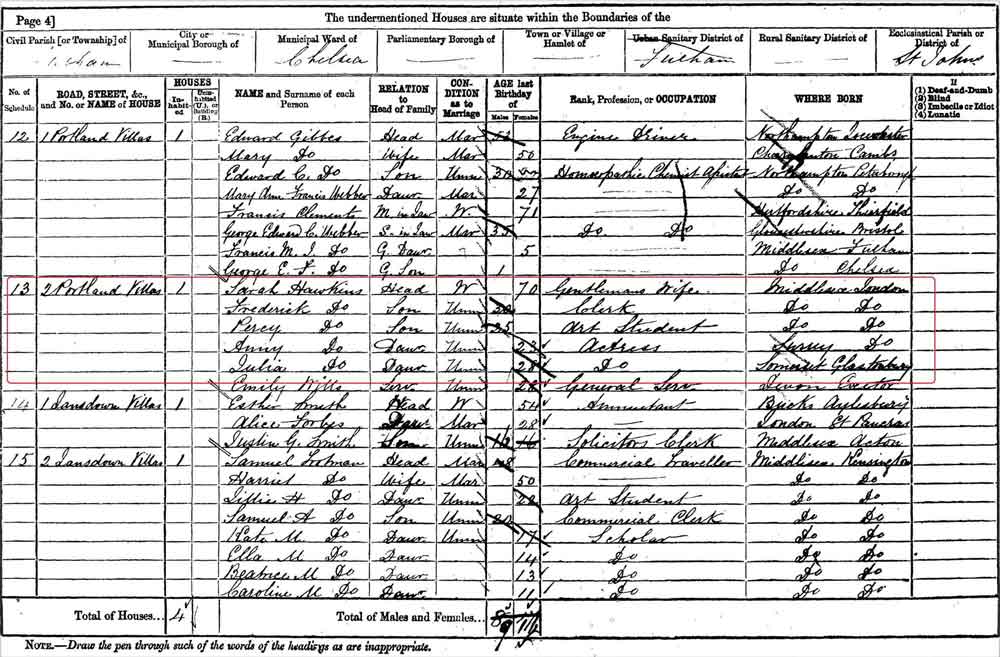 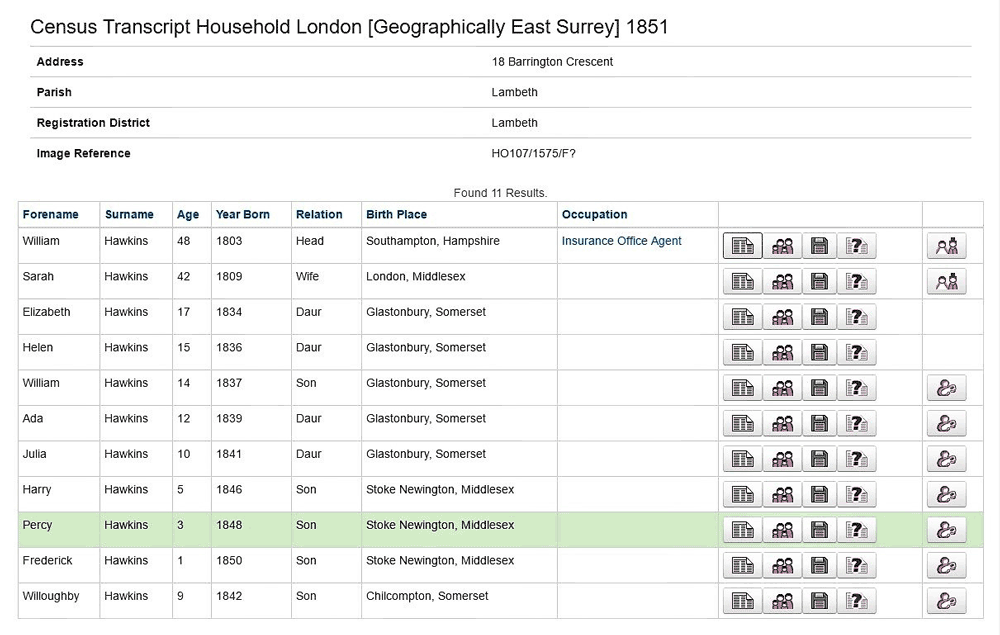 Amy and Arthur Dacre were a showbiz couple who had once engaged the press and theatre audiences and who had both adopted rather grand stage names. Arthur was remembered fondly for his presentation of a fine example of swordsmanship on the stage, while his wife had been lauded by the press in her time as an actress.

The records on TheGenealogist can be used to great effect not only to research an ancestor’s life but also to see people and places from their time in its Image Archive. We can also leaf through the pages of newspapers and magazines on TheGenealogist to see if they are mentioned or what our ancestors were reading at the time and what concerned them.