Gertrude Jekyll and her family roots

Nick Thorne discovers the link between the spinster gardener, London bankers and the story of Jekyll and Hyde 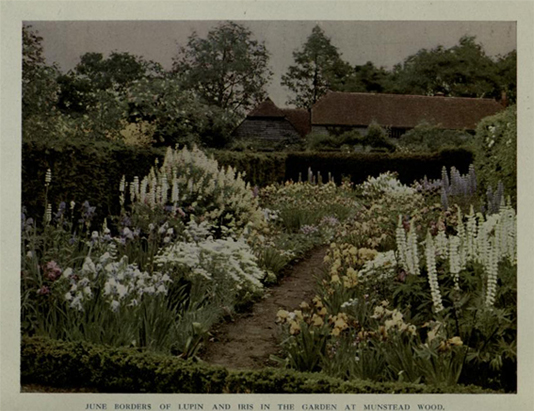 As spring time arrives, many of us may make a visit to a historic house and its picturesque gardens. While marvelling at the eye-catching floral displays, we may find ourselves curious about the history of the person who originally designed it.

One of the most important English garden designers was Miss Gertrude Jekyll. A pioneer of the less formal style of gardening, she is credited with creating more than 400 gardens in Britain, Europe and the United States and contributed over 1,000 articles to magazines such as Country Life and The Garden. She is also known for working with the architect Edwin Lutyens on several projects - one of which was her own house Munstead Wood, in Surrey, the construction of which began in 1895. The house is now a private residence, but the gardens are opened to the public by arrangement.

Using the National Tithe Collection on TheGenealogist to find the tithe map and accompanying apportionment book for Godalming in Surrey, we can see that the location she chose for her own garden was triangular and bounded by roads on all sides. Tithe maps are fantastic for revealing the plots that our ancestors occupied or owned and TheGenealogist has the only online collection covering all of England and Wales in a partnership with The National Archives and some of the county records offices.

To get an idea of the size of the house that Lutyens built for her, the entry in the 1911 census reveals that the 68-year-old ‘Writer & Garden Designer’ was living in a 12-roomed house, with her four female servants.

But who was Gertrude Jekyll and what can we learn about her family? Gertrude was born in London on 29 November 1843 to Captain Edward Joseph Hill Jekyll and Julia Jekyll, née Hammersley. She was their fifth child, out of seven, and Gertrude was not the only one of her family to have made a mark on the world, as we shall see.

Starting with her parents, as recorded in the 1841 census, we find them living at 2 Grafton Street in London. Her elder brother was called Edward Joseph, after their father, and he was aged just one at the time. There was also another brother present, named Arthur, a two-month-old baby.

By searching the Education records on TheGenealogist we find a number of details about Edward Jnr. He is listed in the 1801-1900 Harrow School Register which reveals that his father’s address had become Wargrave Hill in Berkshire. Using this information we can then search for Edward Jekyll Snr in the landowner records on TheGenealogist and see that he appears as a holder of more than 366 acres in the Return of Owners of Land, 1873.

The Harrow School Register also tells us that, as an adult, Gertrude’s eldest brother Edward served in the army and lived in Higham Bury, Ampthill, Bedfordshire - where he became a J.P. and Deputy Lieutenant of that county. His entry in the County Families of the UK 1894 gives us even more details, with which to flesh out the family tree, when we learn that Gertrude’s sister-in-law was the daughter of a German Baron. It is, however, the information that his mother was the daughter of Charles Hammersley that now provides us with a lead on the Jekyll children’s maternal line.

More of Gertrude’s siblings are identified by looking for her in the 1871 census, where she and some of the family can be found at Wargrave Hill in Berkshire. Gertrude is now 27 and the head is her 67-year-old father, Edward. Also present is her 58-year-old mother, Julia, and two of Gertrude’s younger brothers: Herbert, 24, an officer in the Royal Engineers and the 21-year-old Walter, a student at Trinity College, Cambridge.

Branches of the tree

Researching the collateral lines, such as brothers and sisters, can be a very useful tactic when it fills in the gaps that exist with an ancestor’s own records. A search for the two brothers, identified in the 1871 census, reveal details that show that they were very different characters. From their entries in the educational and gentry books, found on TheGenealogist, we can find out much about their careers. These records also provide information about the wider Jekyll family, that will help us build Gertrude’s family tree.

Herbert Jekyll’s entry in Armorial Families now gives us an address for their maternal grandfather, Charles Hammersley. It is 25 Park Crescent, London and from this we can easily go on to locate him listed in the Court Directory pages of the Kelly's Post Office Directory 1856. This book is one of many in the Trades, Residential and Telephone Directories records on TheGenealogist. The 1851 census for the Marylebone area, that includes Park Crescent, gives us Charles Hammersley’s occupation as an Army Agent. Going back to the Kelly’s Post Office Directory 1856 we can note that it also provides us with a second address: 2 Craig’s Court. Investigating this location further reveals it to be the offices of Cox & Co. This firm acted as bankers to the British Army and the Hammersley family are also known to have been London bankers for generations prior to this.

Gertrude’s younger brother, Herbert, went on to become a Royal Engineer officer and rose to the rank of Colonel. Knighted in 1901 he appears in several records on TheGenealogist. The 1907 and 1908 editions of Kelly’s Post Office Directory of London show us that Col Sir Herbert Jekyll held the position of Assistant Secretary to the Railway Department of the Committee of Privy council for Trade - which is one of the names for the Board of Trade. By 1908 he had become the Assistant Superintendent of London Traffic Branch of the Committee and in this post was involved in designing the road network from London. 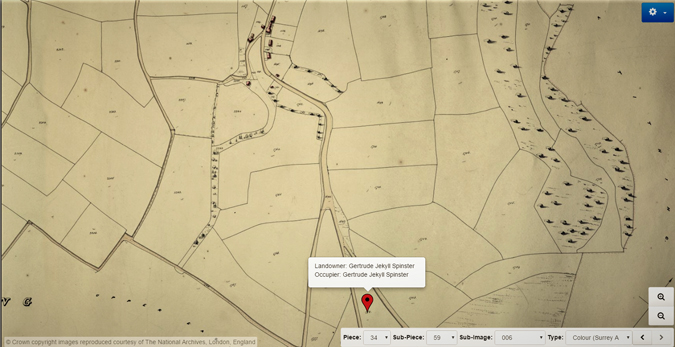 The tithe map of Munstead Wood on TheGenealogist.co.uk

In the Immigration, Emigration & Travel records, on TheGenealogist, we can find Sir Herbert and Lady Jekyll in the passenger lists of a ship bound for Jamaica in 1912. They appear to be travelling with their maid, who is amusingly named Miss Hyde. The short story of Jekyll and Hyde had, in fact, been published 25 years earlier, but there is no connection between these Jekylls and the novella; that association belongs to Gertrude’s brother, Walter, who was by now living in Jamaica and to whom Sir Herbert and Lady Jekyll were paying a visit on this trip.

We had earlier found Walter in the 1871 census at Wargrave Hill, where he had been recorded as a Cambridge student. He is also to be found in the Trinity College Admissions 1868 on TheGenealogist and looking for him in the Occupational record collections discovers him in the 1907 Clergy List. This tells us that after a period as a Curate of Haydon Church, from 1874-77, he became a Minor Canon of Worcester Cathedral between 1877-79. We may then wonder why there are no more appointments listed, considering that this book was published in 1907. Part of the answer would lie in the fact that Walter went to live in Jamaica in 1895. It seems that he retired as an Anglican minister and turned his back on Christianity towards Buddhism! While living on the island he was a regular correspondent about plants and gardens from Jamaica to The Garden, a magazine that was now being edited by his sister Gertrude back in England.

It was Walter’s friendship with Robert Louis Stevenson that was the indirect cause of the family’s surname forever being associated with the phrase "Jekyll and Hyde" - although many garden enthusiasts know that Gertrude and her family pronounced the surname as 'Jeekyll', with a long 'e'. When Stevenson published his novella Strange Case of Dr Jekyll and Mr Hyde in 1886, the author had simply borrowed the surname to use for a character. It was the tale’s success that has meant that the expression "Jekyll and Hyde" has entered into the English language to refer to a person that is very different in moral character from one situation to the next.

By expanding our research to look at her brother’s records on TheGenealogist, we have managed to use those collateral branches to find out more about our famous gardener’s roots. We have discovered on the way her connection to generations of bankers, the road system of London, a former Anglican priest who adopted Buddhism in Jamaica and the Strange Case of Dr Jekyll and Mr Hyde. 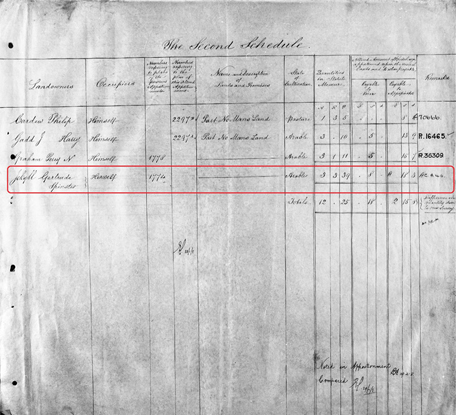