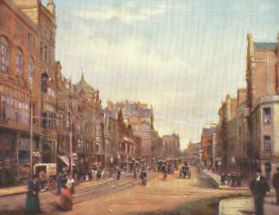 Until the Roman conquest of Britain, the area that would become known as Glamorgan (or Glamorganshire) was part of the territory of the Silures – a Celtic British tribe that flourished in the Iron Age.

The region as we know it originated as an independent petty kingdom named Glywysing, believed to be named after a 5th-century Welsh king called Glywys. The name Morgannwg or Glamorgan (‘territory of Morgan’) reputedly derives from the 8th-century king Morgan ab Athrwys. By virtue of its location and geography, Morgannwg was the second part of Wales, after Gwent, to fall under the control of the Normans and was frequently the scene of fighting between the Marcher Lords and Welsh princes.

The Laws in Wales Acts of 1535 established the County of Glamorgan and the administration of justice passed into the hands of the Crown. The Lordship became a shire and was awarded its first Parliamentary representative with the creation of the Glamorganshire constituency in 1536.

The main industry of Glamorgan during this period was agriculture. In the upland, or Blaenau area, the hilly terrain along with many areas being densely wooded, made arable farming unprofitable, so the local farming concentrated on the rearing of horses, cattle and sheep. The lowland, or Bro was devoted to more general branches of farming, cereal, grass for pasture, hay and stock raising. Non-agricultural industries were generally small scale, with some shallow coal pits, fulling mills, weaving and pottery-making. The main heavy industry of note during this period was copper smelting, and this was centred on the towns of Swansea and Neath. Although copper had been mined in Wales since the Bronze Age, it was not until non-ferrous metalworking became a major industry in the late 17th century that Glamorgan saw a concentration of works appearing in a belt between Kidwelly and Port Talbot. Smelting of copper started around Neath in the 16th century but the scale of the works increased dramatically from the early 18th century when Swansea displaced Bristol as Britain’s copper smelting capital until the virtual end of the trade in the 1920s.

Even at its peak, copper smelting was never as significant as iron smelting, which was the major industrial employer of men and capital in south Wales before the rise of the sale-coal industry. As well as copper and iron, Glamorgan became an important centre for the tinplate industry.

The largest change to industrial Glamorgan was the opening up of the South Wales coalfield, the largest continuous coalfield in Britain, which occupied the greater part of Glamorgan, mostly north of the Vale.

In 1828 the South Wales coalfield was producing an estimated 3 million tons of coal, by 1840 that had risen to 4.5 million, with about 70 percent consumed by local commercial and domestic usage. Along with the increase in coal production came a very large increase in the population, as people emigrated to the area to seek employment.

After the First World War, there was an initial drop in coal and iron production and unemployment in the upland valleys began to increase at a dramatic rate, but trade and unemployment were temporarily boosted with the outbreak of WW2. A shortage of workers to run the mines saw the introduction of the conscripted Bevin Boys.

Exclusive census analysis from data at TheGenealogist reveals that common surnames in Glamorgan in the 19th century included David, John, William, Davis, Richard, Jenkin, Griffith, Hopkin, Griffiths and Howell. Between 1841 and 1911 the county’s population rose from 149,000 to 1.1 million.

Leading data website TheGenealogist.co.uk has a wealth of records for Glamorgan. Here is a quick run-down of what you can find (in addition to national collections):