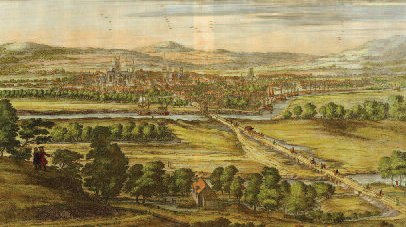 The region now known as Gloucestershire was originally inhabited by Brythonic peoples (ancestors of the Welsh and other British Celtic peoples) in the Iron Age and Roman periods. In the final quarter of the 6th century, the Saxons of Wessex began to establish control over the area. Gloucestershire probably originated as a shire in the 10th century; towards the close of the 11th century, the boundaries were readjusted to include Winchcombeshire, previously a county by itself, and at the same time the forest district between the Wye and the Severn was added to Gloucestershire.

In the barons’ war of the reign of Henry III, Gloucester was garrisoned for Simon de Montfort, but was captured by Prince Edward in 1265; in the same year de Montfort was killed at Evesham. Bristol – formerly in this county – and Gloucester actively supported the Yorkist cause during the Wars of the Roses. In the religious struggles of the 16th century Gloucester showed strong Protestant sympathy, and in the reign of Mary, Bishop Hooper was sent to Gloucester to be burnt as a warning to the county. The same Puritan leanings induced the county to support the Parliamentary cause in the civil war of the 17th century. In 1643 Bristol and Cirencester were captured by the Royalists, but the latter was recovered in the same year and Bristol in 1645.

Bristol was made a county in 1425, and in 1483 Richard III made Gloucester an independent county, adding to it the hundreds of Dudston and Kings Barton. The latter were reunited to Gloucestershire in 1673, but the cities of Bristol and Gloucester continued to rank as independent counties, with separate jurisdiction, county rate and assizes.

The physical characteristics of the three natural divisions of Gloucestershire have given rise in each to a particular industry. The forest district, until the development of the Sussex mines in the 16th century, was the chief iron producing area of the kingdom, the mines having been worked in Roman times, while the abundance of timber gave rise to numerous tanneries and to an important shipbuilding trade.

The agricultural hill district gradually absorbed the woollen trade from the big towns, which now devoted themselves almost entirely to foreign commerce. Silkweaving was introduced in the 17th century, and was especially prosperous in the Stroud valley. The abundance of clay and building-stone in the county gave rise to considerable manufactures of brick, tiles and pottery. Numerous minor industries sprang up in the 17th and 18th centuries, such as flaxgrowing and the manufacture of pins, buttons, lace, stockings, rope and sailcloth.

Exclusive census analysis from the data at TheGenealogist.co.uk reveals that common Gloucestershire surnames include Davis, Harris, James, Webb, Cook and Hill; in 1841, Morgan, Cox and Price were also common here; as were Lewis, Bennett and Baker in 1911.

Leading data website TheGenealogist.co.uk has a wealth of records for Gloucestershire. Here is a quick run-down of what you can find (in addition to national collections):