Grandpa "caught a bit of shrapnel" in World War I and I soon revealed how...

Growing up in the 1960s and 70s I was aware my grandfather had a nasty scar on one of his shins. It was only visible when he sat down and his trouser leg rode up. He wasn't the sort of man that would show off his disfigurement, or indeed talk much about his experience in World War 1. All I recall him saying was he "caught a bit of shrapnel in the leg".

My grandfather occasionally spoke about joining up for World War 1 to be a motorcycle despatch rider with the Royal Engineer Signal Service and that it was a really exciting time for him. To begin with his duties were to carry urgent orders and messages from headquarters to military units, in a period when other forms of communications were limited and insecure.

The main thrust of his story was that he was happiest riding about the war zone on his motorcycle, delivering the despatches. There would've been an element of danger and it must have been quite thrilling for him to weave his trusty machine down the roads and tracks towards the front line and back.

Then everything changed when a supervisor found out he was a trained architect. This meant he had officer potential plus technical drawing skills that could be used elsewhere. He was persuaded to take a wartime temporary commission in the Royal Engineers and put his expertise to better use. With that his war took a less carefree turn, probably involving surveying and some type of military construction as the Army became bogged down in trench warfare.

Grandpa's story was well rehearsed in the telling and was always the same each time WW1 was mentioned. No additional information was ever given and he never said how he got his wound. In the family, the story circulated that he had been riding to the front in war-torn France, with some communiqué or other, when he came under fire. With shells bursting beside him he was hit in the leg and that put a stop to his despatch riding. But now, by using the military records at TheGenealogist, I've discovered he got injured after he'd become an officer rather than before. 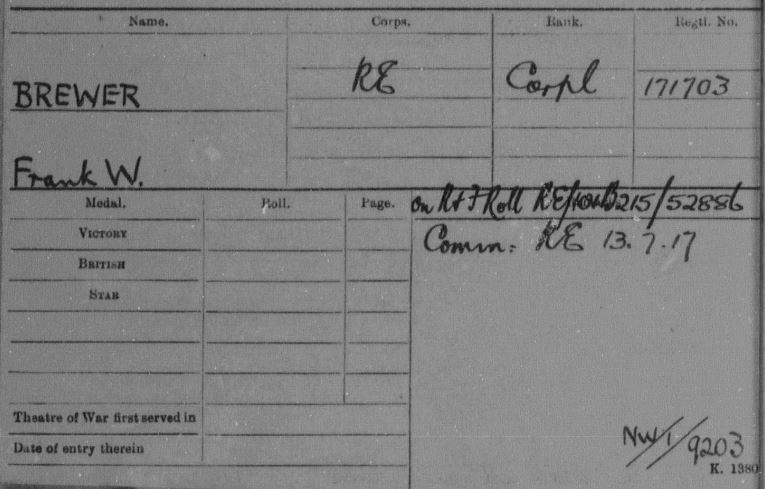 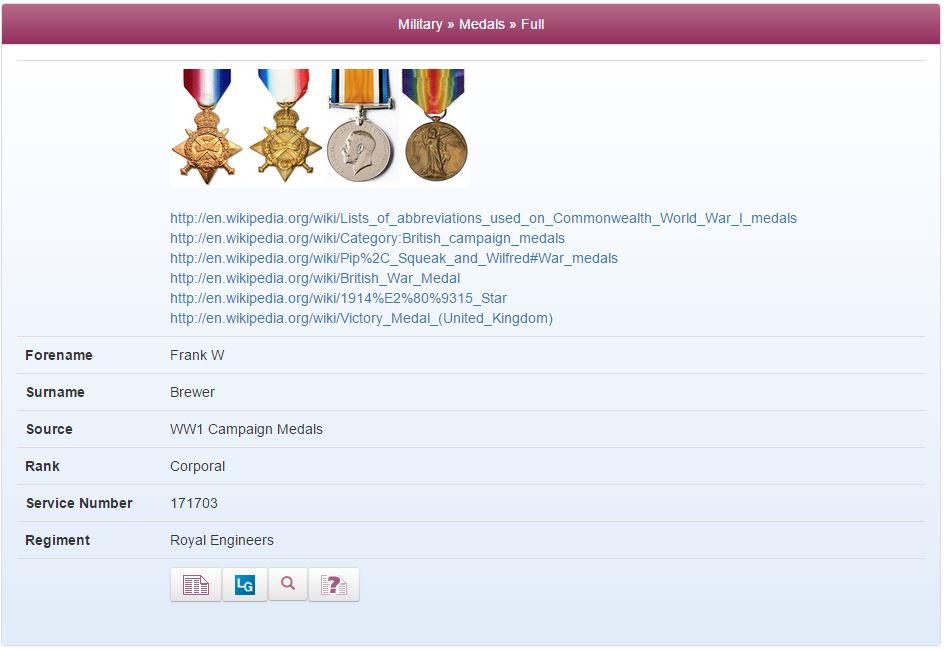 Revelation: In TheGenealogist's collection of campaign medal cards, Nick discovered his grandfather had been promoted to the rank of corporal

Frank Wilman Brewer was, to be precise, my step-grandfather, having married my widowed maternal grandmother. But to me he was simply "Grandpa" and had quite an influence on me, passing on his values as I grew up. I knew he'd retired from being an architect and surveyor in the 1950s and the profession ran in his family, as he was the son of an architect and surveyor from Richmond in Surrey. Using the 1911 Census at TheGenealogist, I found my grandfather as a 25-year-old who'd been married to his first wife for one-and-a-half years and was living at Grena Road, Richmond.

In 1915 Frank W Brewer signed up with the Royal Engineers (Motor Cyclist Section). From the collection of WW1 campaign medal cards on TheGenealogist, I found out he'd been promoted to the rank of corporal before he was then discharged in July 1917 for the purpose of being "appointed to a commission" in the Royal Engineers.

Every soldier qualified for at least one campaign medal if he left his native shore to serve overseas. The medals can reveal much about a person's service, especially if you can't find Army service records. In Frank Brewer's case I accessed his medal card on TheGenealogist and as he'd served some of the war as an "other rank and NCO" it was this card that I discovered. Important information that I was able to note from here, was that his regimental number was 171703, that he'd been promoted to the rank of corporal and it gave me a date of 13 July 1917 for his discharge to be commissioned in the Royal Engineers.

My next find was significant in trying to piece together the story of Grandpa's injury, and all was revealed thanks to a very useful military record, the War Office Weekly Casualty List. Unique to TheGenealogist, it's a list of soldiers of all ranks in WW1 who were reported as killed, wounded, missing in action or prisoners of war.

By searching for my grandfather I came across the record for Second Lieutenant F W Brewer of the Royal Engineers, whose status was listed as wounded in the Daily List of 12 October 1917. This date was just two days shy of three months since he'd been given his commission as an officer. With a single click I was able to see a colour image of his name on the list of casualties and this evidence disproved our family's former belief that he had sustained his shrapnel wound while delivering despatches on his 500cc motorcycle. We now knew that, on becoming a junior officer, he'd still been in the line of fire when he caught his "bit of shrapnel in the leg". So it wasn't just a desk job that he'd been given, drawing plans from the safety of somewhere miles behind the front line. It would seem that he was as much in the firing line carrying out his new duties as he had been before as a motorcycle despatch rider. 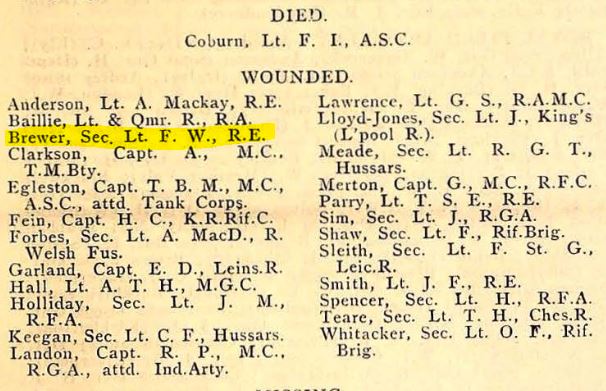 Decorated: The medal records not only tell you what medals your ancestor was awarded but also shows you images of what the medals look like

TheGenealogist has a large number of very useful military records on its site, including Army and Navy lists, rolls of honour, campaign medal cards, prisoner of war records, the War Office Weekly Casualty List and much more. These resources are often invaluable for finding your ancestors and perhaps will also enable you to clarify their wartime service timeline, just as I was able to do for my grandfather.