John Atkinson Grimshaw’s ‘Shipping on the Clyde’, 1881. The Clyde and its environs was the subject for many artists, including LS Lowry and Stanley Spencer

For those with ancestors from Glasgow, Edinburgh and Aberdeen in particular there is a great deal to explore online at www.thegenealogist.co.uk.

For Aberdeen, the most northerly of the three cities, records available include partial census records for 1851, land owner records 1872–3, and Aberdeen Post Office Directories for 1923–4 and 1948–9.

There is evidence of Aberdeen and its environs being inhabited for at least eight millennia, especially around the banks of the Dee and Don rivers. From the mid-18th to the mid-20th centuries, locally-quarried grey granite was used in the city’s construction and gave rise to its most well-known nickname, the Granite City. David I of Scotland made Aberdeen a Royal Burgh in the 12th century, which allowed its economic rise. Traditionally associated with fishing, paper-making, shipbuilding and textiles, modern Aberdeen’s connection to the North Sea oil industry has made the region synonymous with this commodity.

Glasgow’s records at TheGenealogist contain a number of Post Office Directories, dating from the 1840s to the 1920s, Glasgow Directories from the 1700s, the partial 1851 census and land owner records from 1872–3, and Glasgow University’s 1728–1858 Matriculation Albums. (Matriculation is the formal process of entering the university.)

Glasgow, like Aberdeen, developed around its river banks. Trade was aided by it being granted burgh status in the 1100s. The Clyde allowed Glasgow’s growth from rural settlement to at one time the biggest seaport in Britain, due to its position of access to the Americans and Caribbean. The Industrial Revolution saw the city burgeon into a hub of chemical and engineering works, in particular shipbuilding on the banks of the Clyde. Textiles were also a cornerstone of the city’s economy.

The Glasgow Directories included in the records give an insight into the varied trades and businesses operation in the Industrial Revolution city, as well as lists of magistrates, doctors, midwives, professors in the university and officers of excise. These are followed by alphabetical listings of traders.

Records for the Scottish capital, Edinburgh, meanwhile, are also numerous and range in date from 1406 (Roll of Burgesses – a freeman of a borough, or burgh – and Guild Brethren) to the 1930s (Edinburgh and Leith Post Office Directory). Other Post Office Directories go back to the 1770s. As for Glasgow and Aberdeen, the 1851 partial census and Land Owner Records from 1872–3 are available; in addition, the 1880 Edinburgh Almanac, the Edinburgh High School Roll of Honour for the years of World War One and a 1930s official guide to Edinburgh can be viewed.

One of the most comprehensive collections is the 1601–1700 Edinburgh wills set, with lists of testaments that reveal the wide variety of trades in operation at different times. However, Edinburgh did not develop industrially in the same way as Glasgow – which was larger in size by 1821 – and relied on printing and brewing and distilling into the 1800s, although rubber manufacture and engineering works grew. One of the main industrial areas was Fountainbridge, west of the centre, close to the Union Canal and Caledonian Railway.

The ancient universities are those founded during the Medieval and Renaissance eras, and include St Andrews, Glasgow, Aberdeen and Edinburgh. The latter is the only to have been a civic/non-ecclesiastic) foundation, and its post-Reformation founding means that its place in the canon of ancient universities is sometimes debated.

The University of St Andrews is founded by Augustinians

Founding of the University of Glasgow

Founding of the University and King’s College of Aberdeen

The University of Edinburgh founded

The University of Glasgow

The University of Glasgow was founded in 1451, making it the second-oldest in Scotland (after St Andrews) and the fourth oldest in Britain, after Oxford and Cambridge. At the request of King James II, the university was chartered by a Papal Bull from Pope Nicholas V, making it an ecclesiastical body (as were St Andrews and Aberdeen). The original Bull went missing during the upheaval of the Scottish Reformation in the 1560s, but it is still the authority used to confer degrees.

Glasgow University’s Matriculation Albums, which can be searched and read online at The Genealogist, contain the records of, amongst many other famous names, the economist Adam Smith in 1737. Smith (pictured) was born in June 1723, which makes him just 14 years old at the time of his enrolment. His records include further information about his future accomplishments, including his time writing his magnum opus, The Wealth of Nations, from 1766–78 in Kirkcaldy and London. Also detailed are family members who attended the same alma mater, where Smith later took up a professorship in moral philosophy. 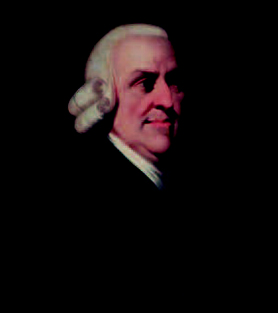