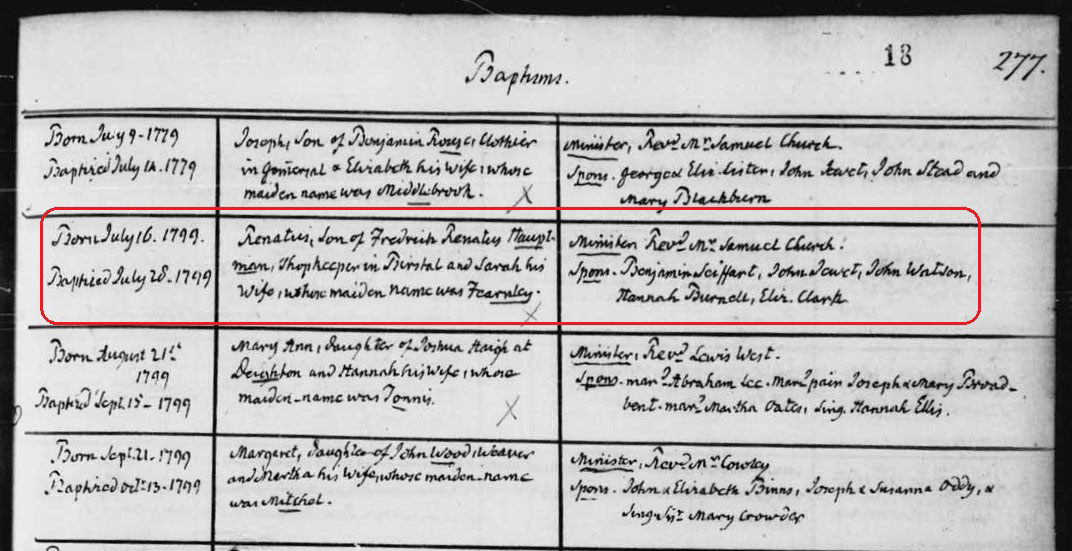 The nonconformist baptism record for Renatus Hauptman, born on 28 July 1799 and baptised on 21 August that year

The Burial of Sarah Hauptman in April 1818 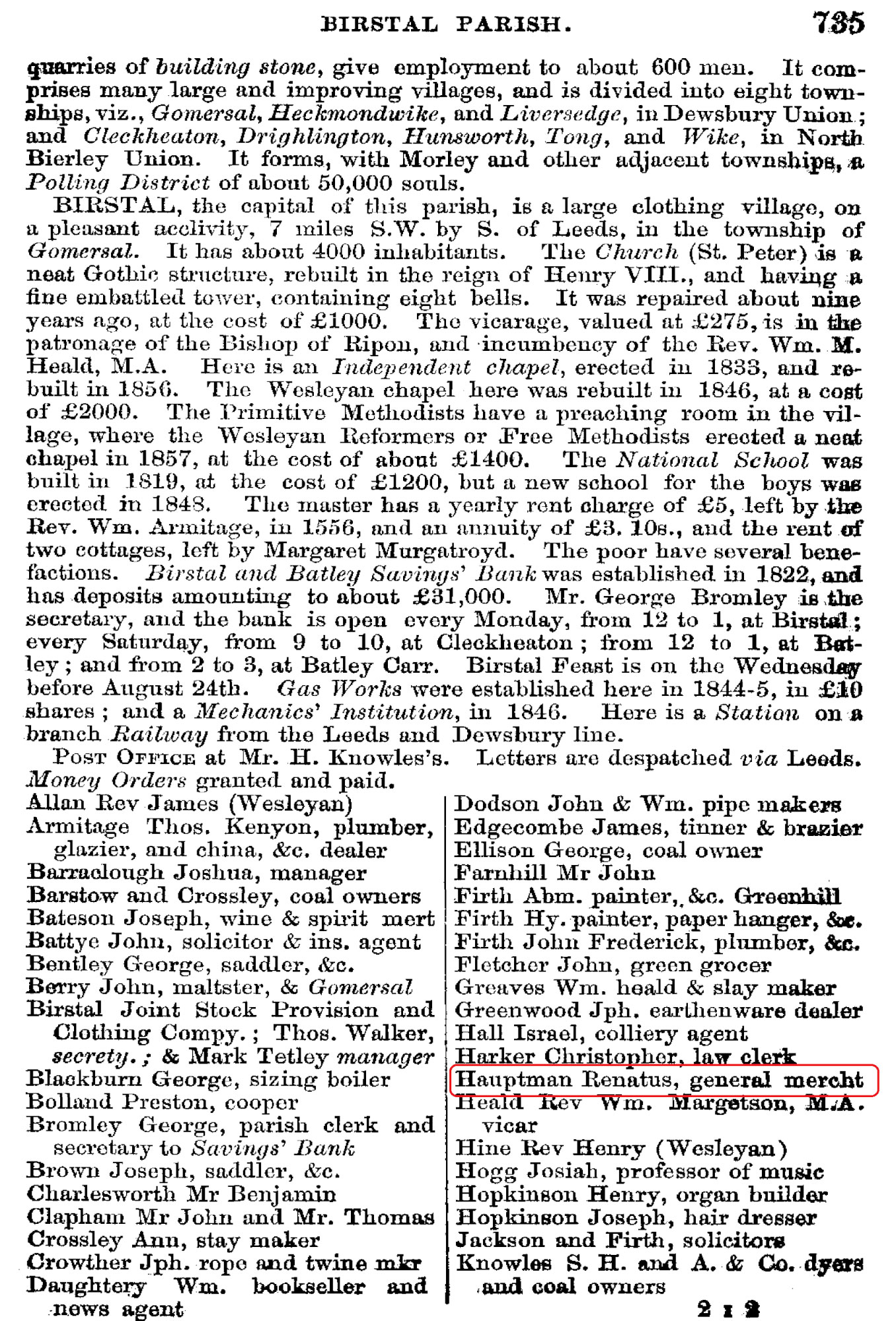 It was around Guy Fawkes night in November 1847; revolution was brewing abroad and the local police were called to a house at Birstall, near Dewsbury in Yorkshire. The neighbours had tipped them off that a middle aged single man with a foreign sounding name had an immense amount of gunpowder stored in his home in the village. If it had gone up the 5 tons and 11 hundredweight of explosives would have seen catastrophic damage to the village.

Notwithstanding his Germanic name, Renatus Hauptman, was born in Yorkshire and was a local ironmonger. Investigations revealed that this wasn’t a case of a disgruntled agitator plotting to overthrow Victorian England, just a businessman who had seized the opportunity to represent a large London firm and take advantage of the expansion of the local infrastructure. Perhaps he just hadn’t really thought through the storage problem that he would have taking on this amount of explosive before agreeing to act as agent for the manufacturer. The building of the new Leeds, Dewsbury and Manchester Railway required a tunnel to be blasted at Morley and the report I came across, in The Illustrated London News for November 20, 1847 on TheGenealogist, explained that there were ‘no less than 80 barrels, 70 half-barrels, and 50 quarter-barrels’ seized from his house a fortnight or so before. The paper, however, didn’t know how to spell his first name or his surname and so they took a stab at it: Ronatus Harptner - and got it wrong in both cases!

By using the Trade, Residential & Telephone directories on TheGenealogist we can find Renatus listed as a General Merchant in White’s Directory of Leeds & Bradford 1861 and get a picture of the village fourteen or so years later - by which time the directory could proclaim that: ‘Here is a Station on a branch Railway from the Leeds and Dewsbury line.’

The Morely tunnel also appears on a tithe map for an altered apportionment on the 28th February 1884 that now showed the railway line - whereas the original survey in March 1843 had been before the railway had cut its way through the land.

Tithe maps, and their apportionment book records that are available on TheGenealogist, can be put to considerable use to discover where an ancestor lived in the early Victorian times. They can also be used to get a feel for the environment in which they worked or lived at the time the survey was done. Renatus Hauptman’s house, warehouse and yard was captured in the 1848 Tithe Apportionment book and its accompanying map.

A search within the census records turns up Renatus in the Gomersal district, as a shopkeeper in Birstall and the names of some of his neighbours match those in the tithe record. We may wonder which of them it was that informed the authorities of his highly volatile and dangerous new stock.

We are also able to see that when he was asked if he was born in the county he was able to answer with a yes. His approximate age is recorded as 40 in 1841 when those over 15 years of age were to be rounded down to the nearest 5 years in the census. As he is noted as 40 he could have been born anytime between 1796 and 1801. TheGenealogist gives researchers access to the RG4 Nonconformist records from The National Archives. A search for Renatus finds a baptism in 1799 in the records of the Register of Births, Baptisms and Burials of the Moravian Chapel of Fulneck in Calverley, Yorkshire. His father, Frederick Renatus, was of Moravian emigrant stock and he had run the business before his son had taken it on.

Renatus’ mother was listed as Sarah neé Fearnley and the family obviously worshiped in the Moravian chapel nearby, by the fact that they occur a number of times in the registers deposited in The National Archives but which originally came from this chapel.

Returning to the tithe records on TheGenealogist we are also able to see the location of the chapel and work out that it was on the road between the nearby village of Little Gomersal, and their home in Birstall to the east. It is in the records of this denomination that we see the burials of both of Renatus’ parents and can learn something more about their family story.

There are some stories, to be found published online, that indicate that once his father died Renatus inherited the business and placed his mother in the workhouse - not speaking to her ever again! Just like the family anecdotes, that are handed down to us in our own family history research, the best practice is always to try and verify the tale by looking for conformation in actual records. What we find, in this case, looking for Sarah in the RG4 records on TheGenealogist hints at an altogether different story.

Sarah had died on the 18th of April 1818 and was then buried on the 22nd with the minister seeing fit to add to the entry that she had ‘Died by her own hand’. He had also put in brackets what turns out to be the verdict of the coroner’s court: ‘Lunacy’. Just how this had morphed into her son putting her into the workhouse we just can’t be sure.

Other information in the register gives her maiden name, Fearnley, and that she was the wife of Frederick Renatus Hauptman a shopkeeper of Birstall. With these details it confirm that we have the correct person and so it would seem to discount the stories that she had been sent to the workhouse by her son.

Renatus would have been aged 19 when his mother passed away and Sarah would have been 49 ½, from the details in the record that noted that she was born on October 16th 1769. Only two years and two months later her husband was to also depart the world with his demise being on Christmas day 1820 and Renatus took on the shop in Birstall.

It is probable that when the railway came to the area Renatus must have seen an opportunity of a lifetime for his long established business to benefit from. With the blasting out of the nearby Morley Tunnel requiring large quantities of explosive, for the local ironmonger to act as the agent for a London gunpowder manufacturer would have been a great opportunity. The 1847 court case that resulted from the police raid of his house and yard saw the magistrates imposing a fine of 2 shillings per pound of gunpowder, or £1000 for the whole on him, with the alternative of six months inside Wakefield house of Correction.

Quite how this affected his business locally we can not find out. Nor do we know how his relationship with his neighbours was after this affair. He did, however, live on in the area into old age - so we know that he didn’t up sticks and leave. There doesn't seem to be any records of marriage for our shopkeeper, but his death at the age of 80 can be found in the Dewsbury district records on TheGenealogist for the first quarter of 1880.

By using various records on TheGenealogist we were able to discover much more about the small village merchant, with the foreign name, whose storage of more than 5 tons of gunpowder had so worried his neighbours that they had called the police. With the tithe maps and other records on TheGenealogist we were able to locate the precise site of his house and yard, see where the railway line cut through the countryside, and also find the nonconformist church that his parents were part of. The extra information that the Moravian Chapel’s minister provided in the nonconformist registers allowed us to challenge a story circulating to this day about his treatment of his mother and to reveal a different tragic outcome to her life. When you are doing your own research the records on TheGenealogist can similarly be used to build a bigger picture of your ancestors’ times and so add layers to their story. 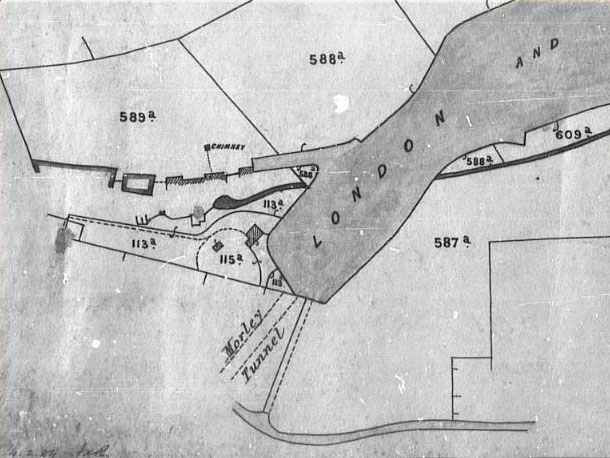 The Morley Tunnel, shown in the altered apportionment tithe map of 1884 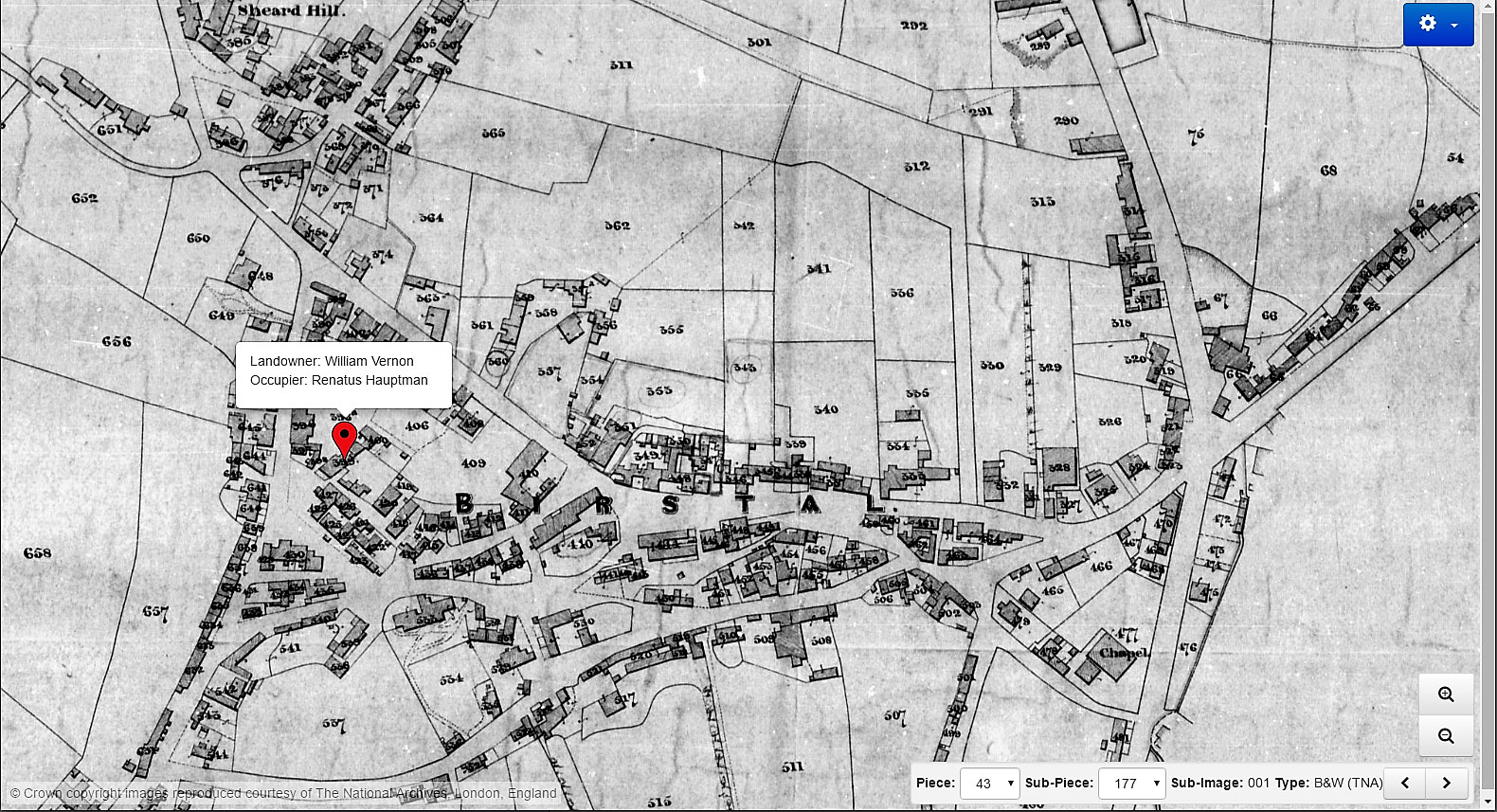 The tithe map pinpointing the premises of Renatus Hauptman in Birstall 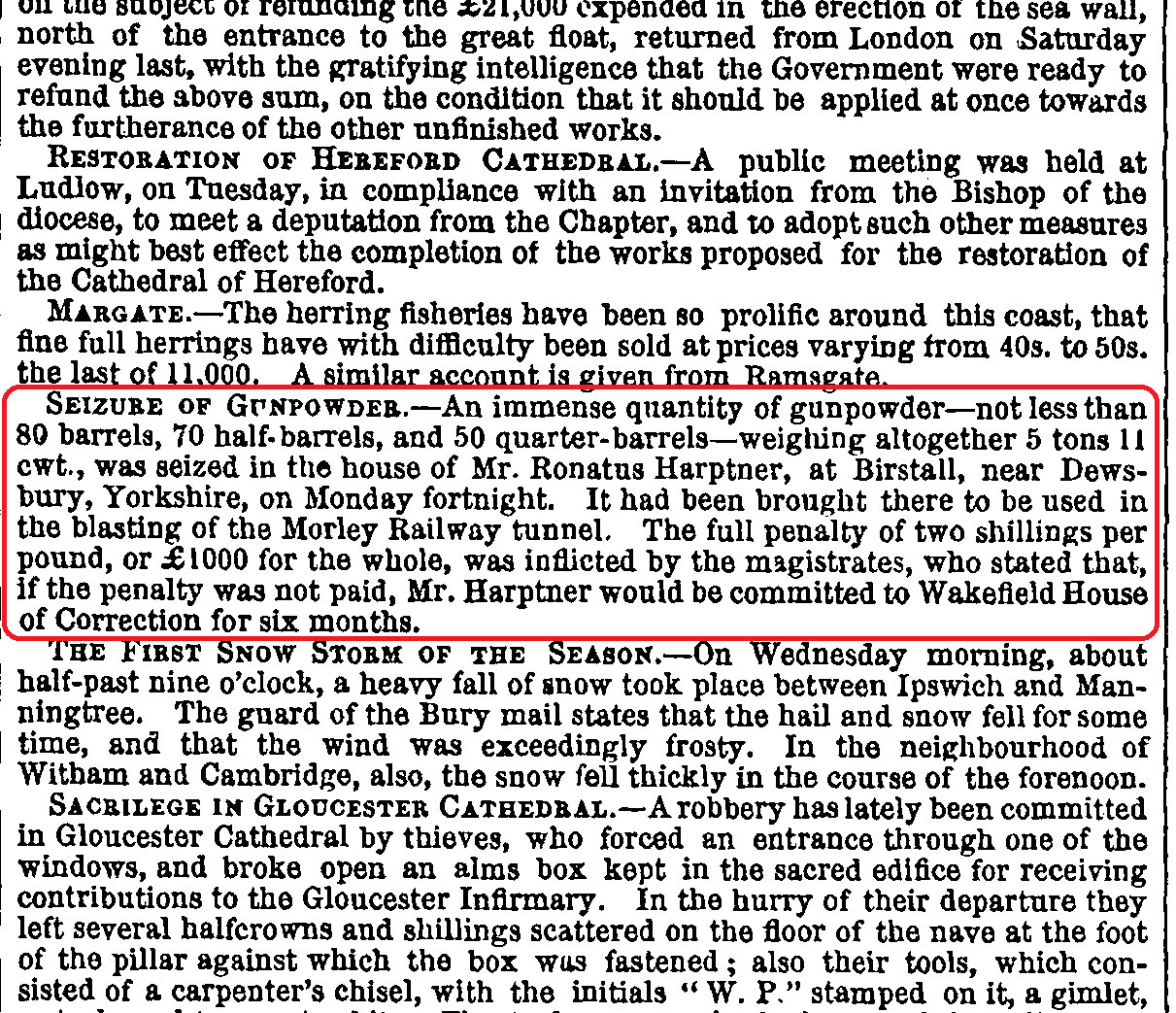 The Illustrated London News for 20 November 1847, on TheGenealogist