Harry Cunningham investigates the changing roles of hairdressers and barbers, from cutting limbs to cutting hair

A bad haircut or a shave that draws blood can leave us embarrassed, short changed and the butt of everyone’s jokes. Finding the right person for the job and deciding on the right cut has always proved an agonising experience. The playwright Robert Greene, a contemporary of Shakespeare, describes an Elizabethan barber-shop experience in this scene from his 1592 work A Quip for an Upstart Courtier that we can all no doubt relate to:

“Sir, will you have your worship’s hair cut after the Italian manner, short and round; and then frownst with the curling irons, to make it look like to a half-moon in a mist? or, like a Spaniard, long at the ears, and curled like to the two ends of an old cast perriwig? Or, will you be Frenchified, with a love-lock down to your shoulders, wherein you may wear your mistress’s favour ? The English cut is base, and gentlemen scorn it; novelty is dainty: speak the word, sir; my scissors are ready to execute your worship’s will.”

Imagine how our ancestors must have felt because, prior to the end of the 18th century, barbers did a lot more than just cut men’s hair and ensure they were freshly shaven. They also pulled teeth, performed minor surgical operations and let blood.

To understand the role of the barber in early modern times and how the profession evolved, we must first understand how medical treatment worked for ordinary people. There was no NHS, no state subsidised healthcare, no GP surgeries. In the 13th century, Pope Honorius III even outlawed religious men from practicing medicine. As a result, barbers, already adept at using sharp objects, increasingly picked up the slack.

The professionalisation of the industry began when the Barber’s Company was granted a royal charter in 1462, ensuring only those registered with the company could act as barbers (and therefore surgeons). In 1540 Henry VIII changed the name of the company to explicitly refer to Barbers and Surgeons, distinguishing between the two industries for the first time but it wasn’t until 1745 that surgeons were granted a royal charter of their own and the two professions began to divorce with the creation of the Royal College of Surgeons.

Bloodletting was also a fundamental part of a barber-surgeon’s service in early modern times. There was a widespread belief that blood entered the body through food and was processed in the liver. Using 16th century logic, eating too much could lead to an excess of blood in the body. Furthermore, the doctrine of the four humours – a belief that the body needed a perfect balance of blood, yellow bile, black bile and phlegm – still largely dictated early modern views about health. It was widely believed that an imbalance of any of these four humours could also lead to an imbalance in temperament, so blood letting was the obvious way of resolving this.

Many theories exist as to the origins of the red and white barbers’ pole but all of them suggest the red is symbolic of the blood lost during bloodletting. Medical historian Dr Lindsey Fitzharris argues the pole is a reference to the metal pole a customer would clutch during blood letting so that the veins would bulge out from the arms and the blood could be drawn out more easily by leeches whilst the brass ball is an allusion to the bowl that collected the blood.

The rise of the hairdresser

According to the Oxford English Dictionary the word ‘hairdressing’ was first recorded in English in 1771 by the writer Tobias Smollett. Originally, a hairdresser dressed and created wigs when they became fashionable during the restoration period.

When wigs fell out of fashion at the end of the 18th century, wig makers instead began to focus on real hair, inevitably coming into conflict with barbers, who, having been stripped of their right to practise surgery in 1745, felt hairdressers were encroaching on their territory. By the 1880s hairdressers too had their own guild and their own weekly journal; business was booming.

A big difference between the two professions was that barbers’ shops were exclusively for men whereas some hairdressers could, for the first time, cater for women. Equally, women themselves could become hairdressers. The 1881 census shows Nancy Astin, a widow of Fleet Street Burnley, Lancashire, running her own shop, employing three men and a boy.

Census records and trade directories are a great place to begin investigating your barber and hairdressing ancestors. They will list both the address and occupation of your ancestor. Censuses for England and Wales and a large selection of trade directories can be found on TheGenealogist.co.uk.

Searching newspaper archives could reveal adverts for apprentices your ancestors may have hired, details of any bankruptcies that beset their business and disputes over properties if your hairdressers rented out a shop rather than worked from home.

Going further back, the introduction of stamp duty on apprenticeships in 1710 created a national database which it is possible to search for further details of who your ancestor may have apprenticed and who may also have been their master. They can be found from 1710 until 1811 on TheGenealogist.

The records of the Worshipful Company of Barbers relating to barbers who worked in the City of London are managed by London Metropolitan Archives and are available to access at The Guildhall Library under the reference CLC/L/BB. The LMA has warned, however, that the archive is large and complex and success can be quite limited, so it is certainly worth consulting other sources first.

If your ancestors were practising as hairdressers in the later half of the 19th century, it might be worth consulting the Hairdressers’ Journal, a weekly trade journal first published in 1882 where you may find tidbits relating to local hairdressing societies and contemporary news and stories about the industry. The British Library has copies from 1882-1948 in its general reference section (shelfmark LOU.TB8). They have not been digitised so you would have to know the exact years your ancestor was in business to stand a chance of finding any mention of them.

If nothing else, however, the journal is an invaluable resource for placing your ancestors into a social context. 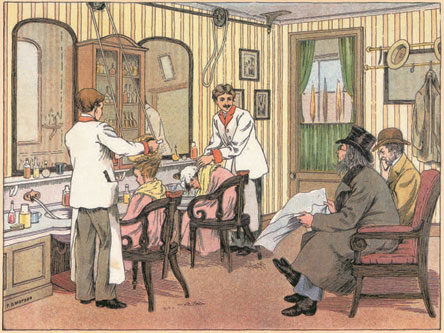 A late Victorian barber’s shop, as depicted by Francis Bedford in The Book of Shops, 1899 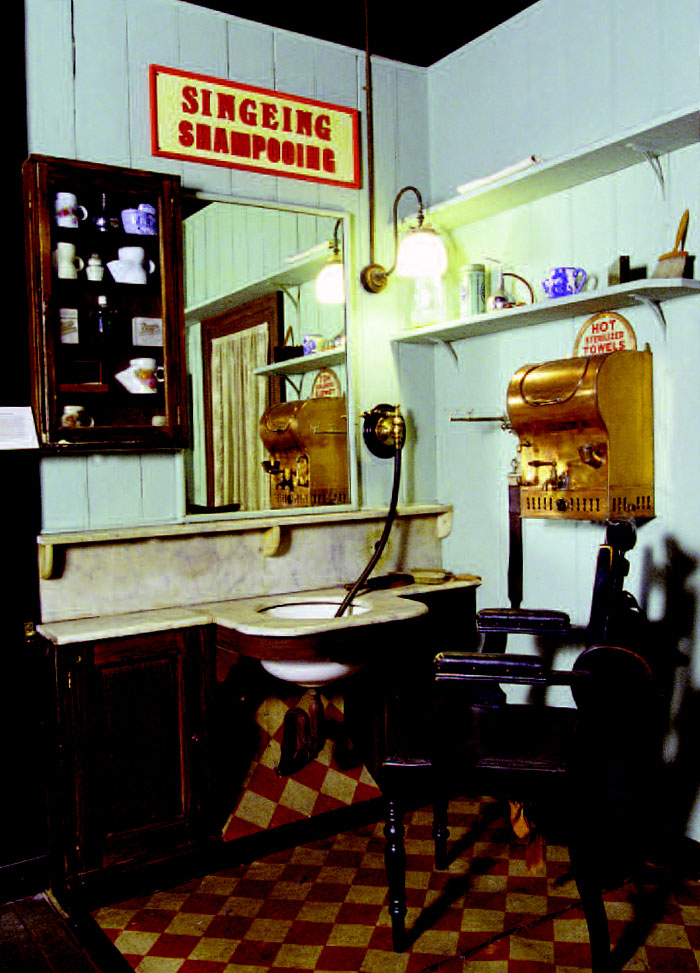 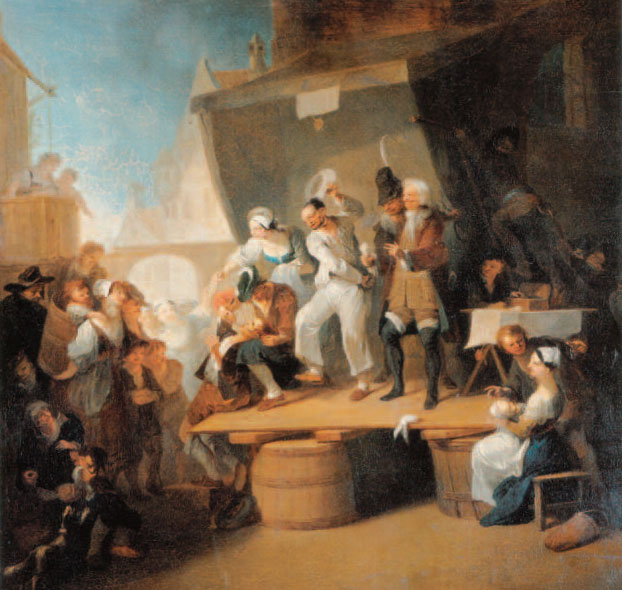 ‘Quack’ barber-surgeons practising in the street in 1785

Nancy Astin and employees in Fleet Street, Burnley, in the 1881 census 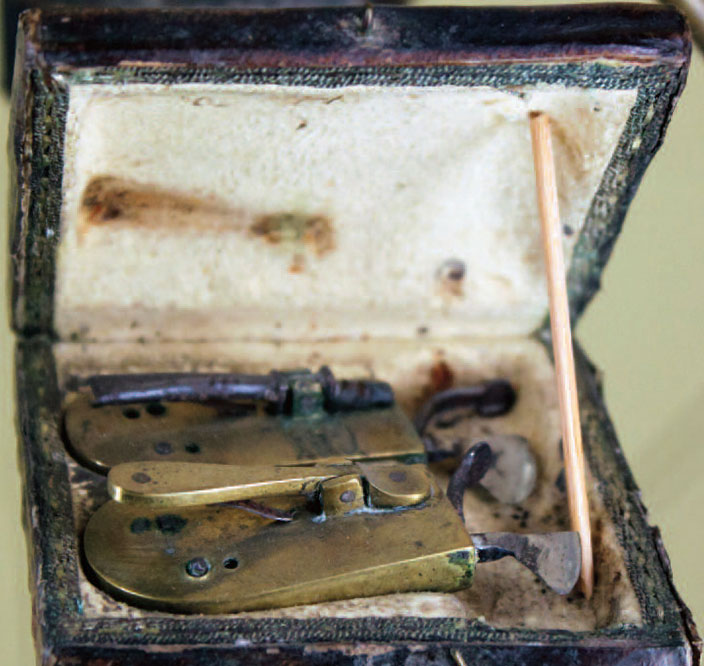 My ancestor Henry Evans (c1817-1899) ran a hairdressers on Gutter Lane, London, in the middle of the 19th century. The son of a schoolmaster from Hertfordshire, Henry secured a property in the heart of the city. He would no doubt have awoken to the bells of St Paul’s Cathedral, a three-minute walk away from his house and shop, and he may have cut the hair of famous Victorians. Living nearby on Milk Street, which runs parallel to Gutter Lane, was a baby Isabella Mayson - one day to become Mrs Beeton, author of the famous Book of Household Management. How Evans had the finance to set himself up in the capital with such a well-placed property largely remains a mystery. However, parish register records from 4 Feb 1838 records his address as Gutter Lane at the time of his marriage to Ann Bowler. The London electoral registers record him as living there with what appears to be a brother, John Evans, in 1835. But both are missing from the 1829 London Post Office Directory, implying that they had come to London between 1829 and 1835. Misleadingly the London electoral registers refer to Henry Evans as a barber not a hairdresser, however, an 1845 trade directory and all censuses lists him as a hairdresser and perfumer.

Tracing Henry reveals the limitations of the early census records. One of his relatives, George, is a hairdresser’s apprentice in 1841 but, as with all 1841 census returns, the relationship between the two is not recorded. The fact that George is 17 and Henry is only 25 implies that they cannot be farther and son, rather George must be another brother or a cousin. By 1851 George has moved on and Henry now has three apprentices as well as two servants; his business was clearly booming and by November 1855, Evans has acquired a second property. A court case in which he accused William James Fortey of stealing his goats, describes him as a ‘hairdresser of London’ but ‘living at Wanstead’. Indeed the later census show him at Nightingale Lane in Wanstead, operating as a hairdresser, while an advert for a ‘Young man to cut hair and shave’ from the Clerkenwell News in 1867 shows that Henry’s son William had taken over Gutter Lane. Henry retired in the 1880s. His will reveals he died leaving £193,000 in today’s money. 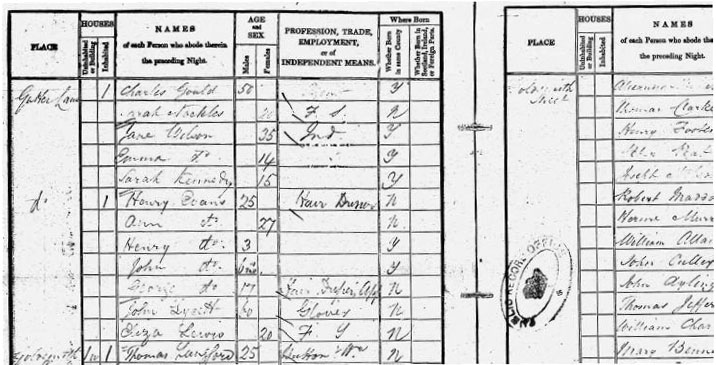 Henry Evans in the 1841 census