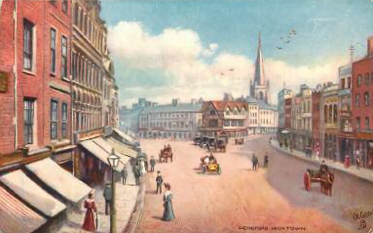 Hereford became the seat of Putta, Bishop of Hereford, some time between AD 676 and 688, after which the settlement continued to grow due to its proximity to the border between Mercia and Wales, becoming the Saxon capital of West Mercia by the beginning of the eighth century.

Hostilities between the Anglo-Saxons and the Welsh came to a head with the Battle of Hereford in 760, in which the Britons freed themselves from the influence of the English. Hereford was again targeted by the Welsh during their conflict with the Anglo-Saxon King Edward the Confessor in AD 1056 when, supported by Viking allies, Gruffydd ap Llywelyn, King of Gwynedd and Powys, marched on the town and put it to the torch before returning home in triumph. Hereford had the only mint west of the Severn in the reign of Athelstan (924–39), and it was to Hereford, then a border town, that Athelstan summoned the leading Welsh princes.

The present Hereford Cathedral dates from the early 12th century, as does the first bridge across the Wye. Former Bishops of Hereford include Saint Thomas de Cantilupe and Lord High Treasurer of England Thomas Charlton.

Hereford, a base for successive holders of the title Earl of Hereford, was once the site of Hereford Castle, which rivalled that of Windsor in size and scale. This was a base for repelling Welsh attacks and a secure stronghold for English kings such as King Henry IV when on campaign in the Welsh Marches against Owain Glyndŵr. The castle was dismantled in the 18th century and landscaped into Castle Green.

After the Battle of Mortimer’s Cross in 1461, during the Wars of the Roses, the defeated Lancastrian leader Owen Tudor (grandfather of the future Henry VII of England) was taken to Hereford by Sir Roger Vaughan and executed in High Town. A plaque now marks the spot of the execution. Vaughan was later himself executed, under a flag of truce, by Owen’s son Jasper.

During the Civil War the city changed hands several times. On 30 September 1642 Parliamentarians led by Sir Robert Harley and Henry Grey, 1st Earl of Stamford occupied the city without opposition. In December they withdrew to Gloucester because of the presence in the area of a Royalist army under Lord Herbert. The city was again occupied briefly from 23 April to 18 May 1643 by Parliamentarians commanded by Sir William Waller but it was in 1645 that the city saw most action. On 31 July 1645 a Scottish army of 14,000 under Alexander Leslie, 1st Earl of Leven besieged the city but met stiff resistance from its garrison and inhabitants. They withdrew on 1 September when they received news that a force led by King Charles was approaching. The city was finally taken for Parliament on 18 December 1645 by Colonel Birch and Colonel Morgan.

Nell Gwynne, actress and mistress of King Charles II, is said to have been born in Hereford in 1650 (although other towns and cities, notably Oxford, also claim her as their own); Gwynn Street is named after her. Another famous actor born in Hereford is David Garrick (1717–1779).

The Bishop’s Palace, next to the Cathedral, was built in 1204 and continually used to the present day. Hereford Cathedral School is also one of the oldest schools in England. The Harold Street Barracks were completed in 1856.

During World War I, in 1916, a fire at the Garrick Theatre killed eight young girls who had been performing at a charity concert.

Leading data website theGenealogist.co.uk has a wealth of records for Hereford and its county. Here is a quick run-down of what you can find (in addition to national collections):