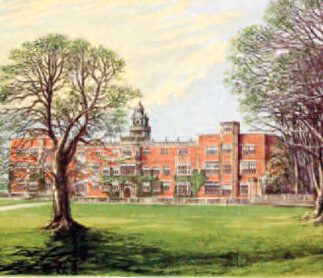 Hertfordshire was founded in the Norse–Saxon wars of the 9th century, and developed through commerce serving London rather than agriculture. Its clay soil was not well-suited to crop cultivation with a medieval plough, although the county did grow good barley which later became important for brewing.

The Roman era saw the development of several new towns, including Verulamium (St Albans) where in c293 the first recorded British martyrdom is traditionally believed to have taken place.

By the 6th century the majority of the modern county was part of the East Saxon kingdom. This relatively short-lived kingdom collapsed in the 9th century, ceding the territory of Hertfordshire to the control of the West Anglians of Mercia. The region finally became an English shire in the 10th century.

A century later William of Normandy received the surrender of the surviving senior English lords and clergy at Berkhamsted, before being crowned at Westminster.

In the high middle ages, the county was relatively urbanised by medieval standards, but there was no large conurbation. Commerce grew in Hertfordshire from the start of the 12th century; the number of markets and fairs rose steadily from about 1100 until the Black Death. From the 13th century, the county traded in butter and cheese and, to a lesser extent, meat, hides and leather. The county also developed inns and other services for travellers to and from London.

The Knights Templar built Baldock, starting around 1140. At around the same time, the leatherworking trade was prominent in Hitchin. Nicholas Breakspear, the only Englishman ever to have been elected Pope, was born on a farm in near Abbots Langley around 1100.

One of the first three printing presses in England was in St Albans. England’s first paper mill stood in Hertford from 1494.

The 14th century Black Death massively reduced Hertfordshire’s population. The subsequent economic conditions contributed to the Peasants’ Revolt in 1381, which involved many Hertfordshire people. After the leader Wat Tyler had been caught and executed, Richard II went to St Albans to quell the rebels. In the 15th century, three battles in the Wars of the Roses took place in Herts, two of them at St Albans.

The 17th century saw the creation of Hugh Myddelton’s New River, an artificial watercourse that predated the building of England’s canal network by over a century. The Grand Junction Canal was cut across the county at the end of the 18th century.

During the 18th century brewing became an important industry in Hertfordshire. Agriculture also improved, thanks to greater mechanisation.

In 1903, Letchworth became the world’s first garden city and Stevenage became the first town to redevelop under the New Towns Act 1946.

From the 1920s until the late 1980s, the town of Borehamwood was home to one of the major British film studio complexes, Elstree.

Exclusive census analysis from the data at TheGenealogist.co.uk reveals that common Shrewsbury surnames include Clark, King, Day, Green, Hill, Carter, Chapman, Webb, Cooper, Turner and Gray; in 1841, Young, Field, Allen and Watson were also common here; as were Clarke, Cook and Ward in 1911.

Leading data website TheGenealogist.co.uk has a wealth of records for Hertfordshire. Here is a quick run-down of what you can find (in addition to national collections):