In search of the Chief Scout 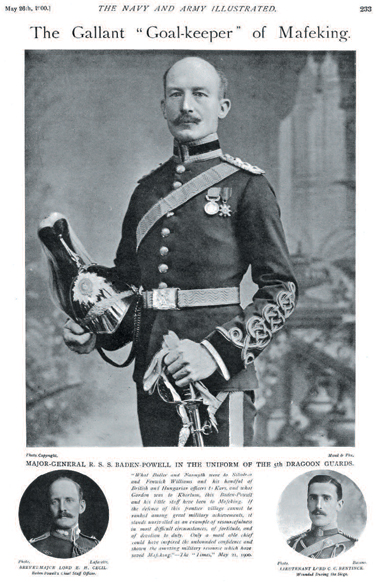 The Navy and Army Illustrated May 26, 1900 from the Newspapers and Magazines on TheGenealogist

Robert Stephenson Smyth Powell was known for much of his life as Baden-Powell, or sometimes just B-P. The founder of the scout movement and one of the most famous of Victorian generals, who successfully defended the African town of Mafeking in the siege of the same name, was born in Paddington, London. A search of the birth records for 1857, on TheGenealogist, reveals that he was registered at birth with the single surname of Powell. He had, however, been blessed with three other forenames at the time of the registration – Robert Stephenson, after his godfather the civil engineer and ‘Father of Railways’, and Smyth, after his mother’s line.

Robert’s mother, Henrietta Grace Smyth, was the daughter of Admiral William Smyth RN, while his father was the Reverend Baden Powell, a Church of England Priest, liberal theologian and Oxford mathematician who held the Savilian Chair of Geometry at the University from 1827 to 1860. The Rev Professor, who died in 1860 when Robert was three, married three times and fathered 13 other children. The three-year-old’s mother changed her family’s name to Baden-Powell, on the death of her husband, to honour him and so pass on his first name to later generations. Later, in 1902, a Royal Licence was issued to make the change official.

A search of the Biography section of TheGenealogist’s Occupational records gives us the Rev Baden Powell’s entry in the Dictionary of National Biography Vol XVI. This furnishes us with the information that he was the eldest son of Baden Powell of Langton in Kent and Stamford Hill, a one time high sheriff of Kent, and so we have a clue as to the next generation back.

Robert Baden-Powell was known to have attributed his success in his life to his upbringing from his strong mother, who had been left to bring up the children. In the 1861 census we find Henrietta Baden-Powell and some of her children in Kensington, but there is no sign of the young Robert. A search of the census for Buckinghamshire, however, finds him and his sister Agnes with their maternal grandparents at St John’s Lodge, Aylesbury where the 73 year old Admiral William Smyth and his 72 year old wife Ann lived. This sister, Agnes, would grow up to be one of the founders of the Girl Guides, with her brother, after he had set up the Boy Scouts.

Notwithstanding his naval grandfather, Robert Baden-Powell chose the army for his career. Hart’s Army List for 1888, that can be found in the military collections on TheGenealogist records the dates of his appointment as a lieutenant in the 13th Hussars as 11 September 1876, when he was 19. He then became a captain on the 16 May 1883.

By 1899 he was now a colonel in command of the 5th Dragoon Guards, a cavalry regiment in India. A piece in the July 29th 1899 edition of The Navy & Army Illustrated, a newly released magazine set on TheGenealogist, reports that Colonel Baden-Powell was one of the Special Service Officers dispatched to South Africa in anticipation of trouble in the Transvaal. The accompanying picture has Baden-Powell wearing a hat that resembles the type of headdress that would be adopted by the Boy Scouts which Baden-Powell would go on to establish in 1907. It is thought, by many, that it was his experience in Africa that he would use later in the formation of the Boy Scouts. Another fine picture, in the 26th May 1900 edition, reveals to us that Baden-Powell had reached the rank of Major-General by that time. The uniform that he is wearing is that of the 5th Dragoon Guards and, in this case, includes a helmet with horsehair plume rather than the wide brimmed scout’s hat of the previous piece.

To find our ancestors leaving Britain on trips across the globe we can turn to the BT27 Passenger Lists on TheGenealogist website. Using this resource we can find the Major-General in 1901 on his way to South Africa from Southampton to Cape Town. From the tick in the column, for details of the passenger, we are able to ascertain the information that he is still unmarried in 1901. Major-General Baden Powell also appears as a single man in several more of the passenger lists that can be searched on TheGenealogist.

Searching for him in the census records reveals that at the time of the 1911 census Sir Robert, as by this time he had been knighted, was on a trip to the Isle of Man. He was staying as a visitor in the house of the Lieutenant Governor of the Isle of Man and is recorded again as being a single man. 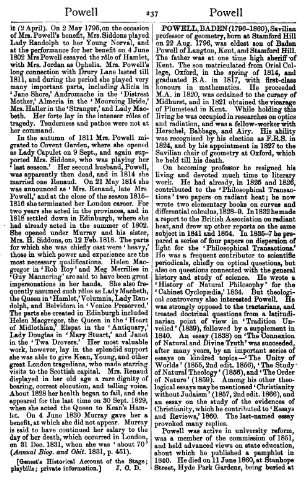 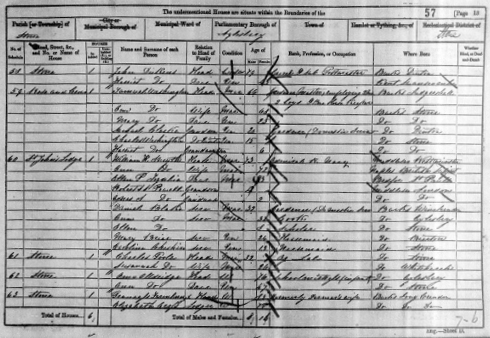 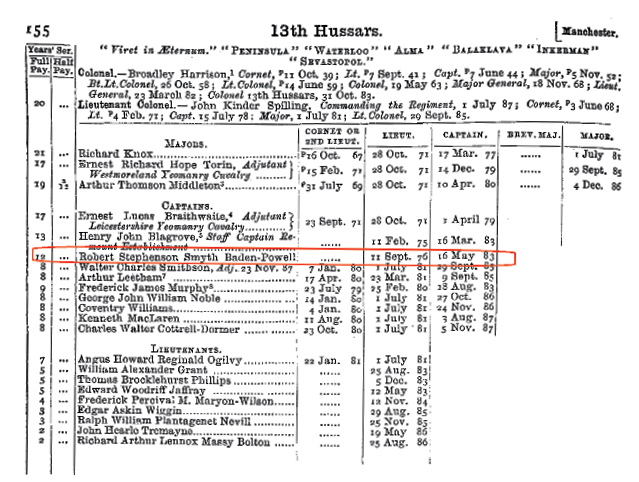 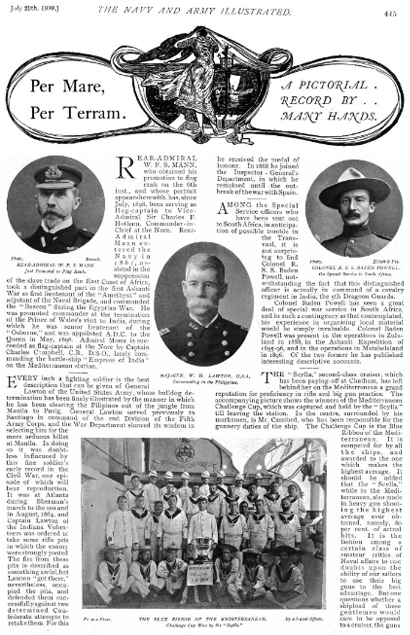 Sir Robert Baden-Powell was actually to get married the very next year, aged by that time 55. By using the Marriage records on TheGenealogist we are able to find out that his bride was Miss Olave St C Soames. She was just 23 in 1912, as we can confirm by searching the birth records for her birth registration in Chesterfield, Derbyshire in the year 1889. The couple wedded in Poole, Dorset not very far from the famous site of Baden-Powell’s first Boy Scout camp at Brownsea Island.

We can go on to use the SmartSearch on TheGenealogist to now find the birth of their first child, Arthur Robert Peter Baden-Powell. He was born in the Battle area of Sussex in the next year with sister Heather Grace Baden-Powell coming along in 1915 followed by another sister, Betty St Clair Baden-Powell, in 1917. All three children were born in the Battle registration district.

Using the Trade, Residential and Telephone Directory resource on TheGenealogist we are able to see that several members of the Baden-Powell family had a London residence at 32 Princess Gate in London including his mother, and two of his brothers.

One of the brothers listed in this directory is an interesting character in his own right. Major Baden F S Baden-Powell was an aviator who, from his entry in the Who’s Who of British Aviation found in the Occupational record collection on TheGenealogist, was responsible for the refounding of the Royal Aeronautical Society. The major had invented man-lifting kites; flew with Wilbur Wright; flew in Zeppelins and at one time owned various aeronautical publications.

There is also information to be found on the other brothers, such as Sir George Baden-Powell a politician and Conservative MP , if we wanted to discover more about the collateral family.

With the First World War, Lt.General Baden-Powell’s skills were not required by the army in any command position. He was, however, rumoured to be engaged in espionage and the authorities were pleased to spread the myth. Within the Newspapers and Magazines on TheGenealogist we can find an edition of The Sphere from April 24th 1915 in which they review Baden-Powell’s special war book: ‘My Adventures As A Spy’.

After living in Hampshire, from 1919 until 1939, Lord and Lady Baden-Powell then made the move to live in Kenya where he died after but a few years. With his death in 1941 his wife moved back to the United Kingdom and her death is recorded in April-June quarter of 1977 in Surrey in the death records on TheGenealogist.

Having grown up as just one sibling within a large family and having lost his father at a very early age, Robert Stephenson Smyth Baden-Powell managed to make a name for himself that is still well known to this day. The records available to search on TheGenealogist have enabled us to discover many details about the British general who defended Mafeking, founded the Boy Scout movement, was one of a large family and who was to marry late in life. 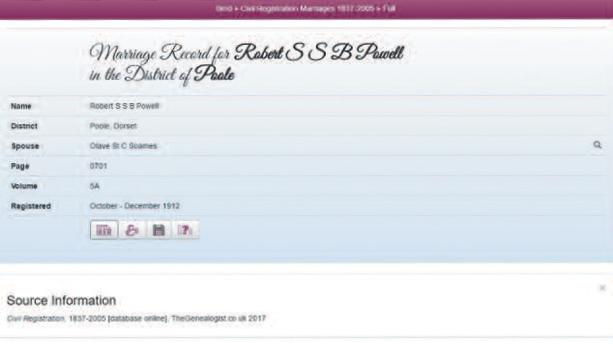 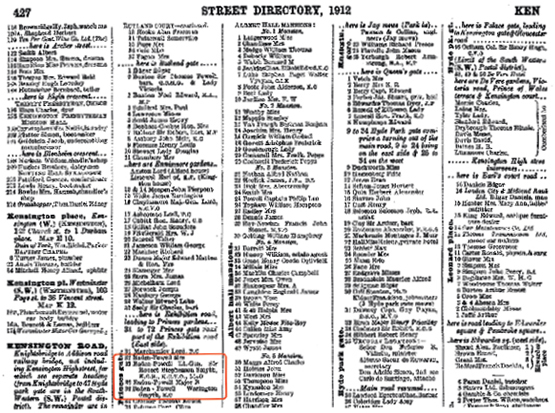 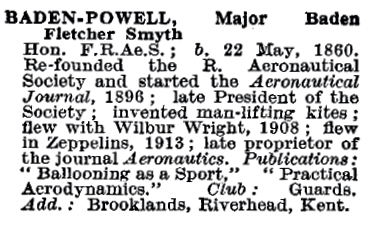 Who’s Who of British Aviation 1936 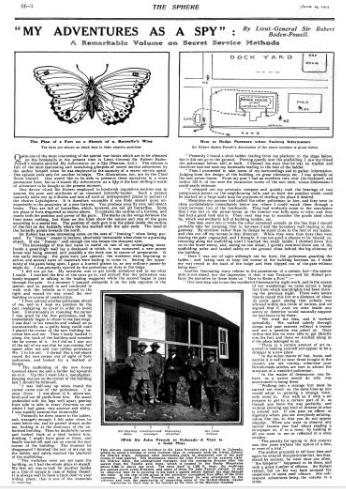 The Sphere April 24, 1915 from TheGenealogist’s Newspapers and Magazines collection 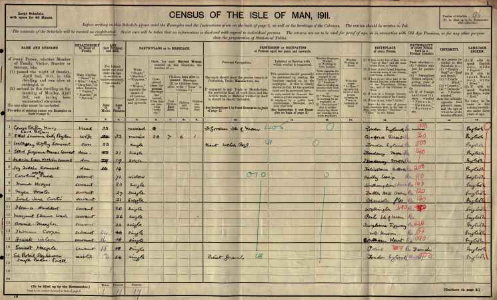