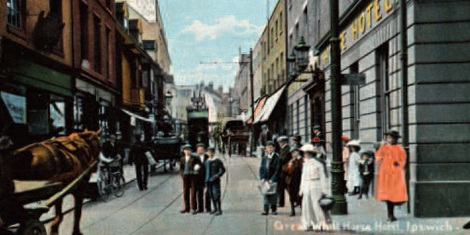 Ipswich in Suffolk has been an important English port since Saxon times, and claims to be one of the country’s oldest towns.

Under the Roman empire, the area around Ipswich formed an important route inland to rural towns and settlements via the rivers Orwell and Gipping. The modern town took shape in the 7th–8th centuries around Ipswich dock, essential to trade with northwestern Europe.

Towards 700AD, Frisian potters from the Netherlands area settled in Ipswich and set up the first large-scale potteries in England since Roman times. Their wares were traded far across England, and the industry was unique to Ipswich for 200 years. With growing prosperity, in about 720AD a large new part of the town was laid out in the Buttermarket area. Parts of the ancient road plan still survive in its modern streets.

After the invasion of 869 Ipswich fell under Viking rule. The earth ramparts circling the town centre were probably raised by Vikings around 900 to prevent its recapture. The town operated a mint under royal licence from King Edgar in the 970s, which continued through the Norman Conquest until the time of King John, who granted the town its first charter in 1200.

In the next four centuries it made the most of its wealth, trading Suffolk cloth with the Continent. Five large religious houses stood in medieval Ipswich. There were also several hospitals including the leper hospital of St Mary Magdalene, founded before 1199.

During the Middle Ages the Marian Shrine of Our Lady of Grace was a famous pilgrimage destination. Around 1380, Geoffrey Chaucer satirised the merchants of Ipswich in the Canterbury Tales.

Thomas Wolsey, the future cardinal, was born in Ipswich about 1475 as the son of a wealthy landowner. One of Henry VIII’s closest political allies, he founded a college in the town in 1528, which was for its brief duration one of the homes of the Ipswich School.

During the 14th to 17th centuries Ipswich was a kontor (trading post) for the Hanseatic League, the port being used for imports and exports to the Baltic.

In the time of Queen Mary the Ipswich Martyrs were burnt at the stake on the Cornhill for their Protestant beliefs. From 1611 to 1634 Ipswich was a major centre for emigration to New England. It was one of the main ports of embarkation for puritans leaving other East Anglian towns and villages for the Massachusetts Bay Colony during the 1630s and what has become known as the Great Migration.

In 1824 Dr George Birkbeck, with support from several local businessmen, founded one of the first Mechanics’ Institutes, which survives to this day as the independent Ipswich Institute reading room and library.

In the mid-19th century coprolite (fossilised animal dung) was discovered; the material was mined and then dissolved in acid, the resulting mixture forming the basis of Fisons fertiliser business.

The Tolly Cobbold brewery, built in the 18th century and rebuilt in 1894–1896, is one of the finest Victorian breweries in the UK. There was a Cobbold brewery in the town from 1746 until 2002.

Ipswich was subject to bombing by German Zeppelins during World War I but the greatest damage by far occurred during the German bombing raids of World War II. The area in and around the docks were especially devastated.

Leading data website TheGenealogist.co.uk has a wealth of records for Ipswich and Suffolk. Here is a quick run-down of what you can find (in addition to national collections):