A major new collection of records from online data giant TheGenealogist.co.uk will help anyone researching their World War One forebears.

In the first week of August the site is releasing more than 117,000 unique new records of Non Commissioned Officers and Other Ranks who were awarded the Military Medal for their service during WW1. As well as the combatants who fought gallantly in battle, within the extensive new collection are listed those brave men and women who did not fire a single shot in the four years of hostilities and who were only concerned with saving lives and rescuing wounded soldiers. The records list all those who were awarded the Military Medal (often abbreviated to the MM) in the war.

As well as the men who served in the conflict, these records help to unveil the women who changed attitudes and perceptions of an entire society with their courageous work on the battlefields.

The new Military Medals collection at TheGenealogist includes an elite band of women who volunteered for front line duty to save wounded soldiers, putting themselves in mortal danger.

The records provide details of women who rescued soldiers from exploding ammunition dumps, carried then out of 'no-man's-land' to safety and faced hostile fire every day. They were justly awarded the Military Medal, the medal for non-commissioned officers and other ranks for bravery in battle.

Before the war, many people were of the fervent opinion that the frontline was not the place for a woman. This attitude pervaded the British Army in 1914 and they refused any female volunteers. However, after helping the Belgian Army instead, many woman volunteers made their mark and gave assistance to the British Army from 1915 onwards.

In the new records, for example, we find the daughter of the Earl of Denbigh (Lady Dorothie May Evelyn Feilding-Moore, who was the first female recipient of the Military Cross), the daughter of the High Sheriff of Norfolk and other high society young women who left a life of privilege behind. Many of them were very able horsewomen who joined up with the romantic idea of riding onto the battlefield and picking up wounded soldiers and bringing them back to safety. In reality they drove heavy ambulances, but for many it still took them into extreme danger and they thrived on the challenge. 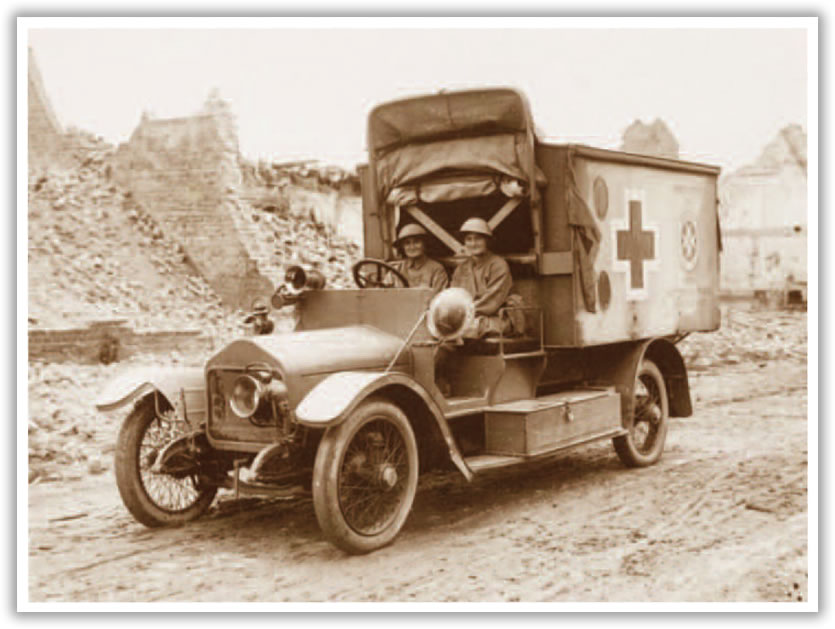 Elsie Knocker and Mairi Chisholm driving a Wolseley ambulance in Belgium during World War One. 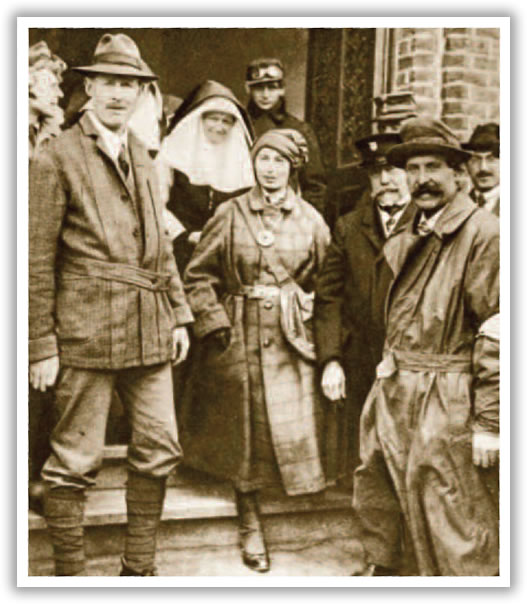 Dorothie Feilding was the first woman to be awarded the Military Medal. Her record is one of the 117,000 available at TheGenealogist.co.uk. 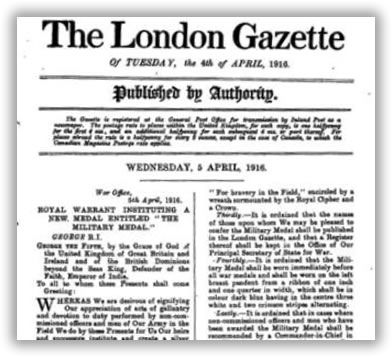 The Military Medal was first announced in the London Gazette
from March 1916. The new records at TheGenealogist link to the
original announcements in the Gazette.

The role of stretcher bearers (along with junior officers) was one of the most dangerous jobs in the war and the new Military Medal collection reveals records of a number of women from privileged backgrounds who risked life and limb saving wounded men in the front line and even out into 'no-man's-land' in full view of the enemy.

The women were faced with idle gossip, inconvenient marriage proposals and dreadful living conditions as well as the usual dangers of working near the front line. However, their bravery won over both the soldiers at the front and the establishment back in Britain who celebrated their bravery. Their role was a ground-breaking one before women even had the vote.

Mark Bayley, Head of Online Content at TheGenealogist .co.uk, commented on the new release: "With our military record releases in 2014, we are aiming to cover all aspects of the First World War. Every new record set unearths surprises and the Military Medal collection is no different as we discover the female front line heroes of the war, on a par with Florence Nightingale from the earlier Crimean War. These unique records consistently provide fascinating tales behind them."

To read about the extreme bravery of the men and women who saved lives and the fascinating stories of the wealthy young women who risked life and limb as volunteers in the line of duty see the dedicated page at www.TheGenealogist.co.uk/Military-Medal. There you will find photographs, stories, statistics and a free search facility.

The Military Medal records at TheGenealogist.co.uk uncover the heroes of 'Hector Munro's Flying Ambulance Corps' set up initially to help wounded Belgian soldiers in Flanders. We find, for example, the Military Medal awards for Mairi Lambert Gooden-Chisholm and Elsie De T'Serclaes (aka Elsie Knocker), known as the Madonnas of Pervyse, who set up an independent field dressing station just 100 yards from the trenches. They were to become the most photographed women of the war.

Mairi Chisholm (1896-1981) was born on Nairn, Scotland. Her family was independently wealthy and even owned a plantation in Trinidad. As a teenager, she watched her older brother, Uailean, competing at motorbike rallies. Against his wife's wishes, her father bought Mairi a Douglas motorbike. She was just 18 years old when, while roaring round the Hampshire and Dorset lanes, she met 30-year-old Elsie Knocker, a divorcee and mother of a young son. They became fast friends and soon began competing in motorcycle and sidecar trials together.

When war was declared in 1914, Knocker wrote to Chisholm that there was "work to be done", and suggested they go to London to become dispatch riders for the Women's Emergency Corps. Chisholm rode her motorbike all the way from Dorset to the capital. She was spotted making hairpin corners in the city by a Dr Hector Munro. Munro was setting up a Flying Ambulance Corps to help the Belgians who had been caught unawares by the German invasion. He invited her to join his team, and Elsie followed.

The women worked tirelessly picking up wounded soldiers mid-way from the front and transporting them back to their field hospital at the rear. After the beds ran out, the wounded were laid on the floor or propped up against the wall. 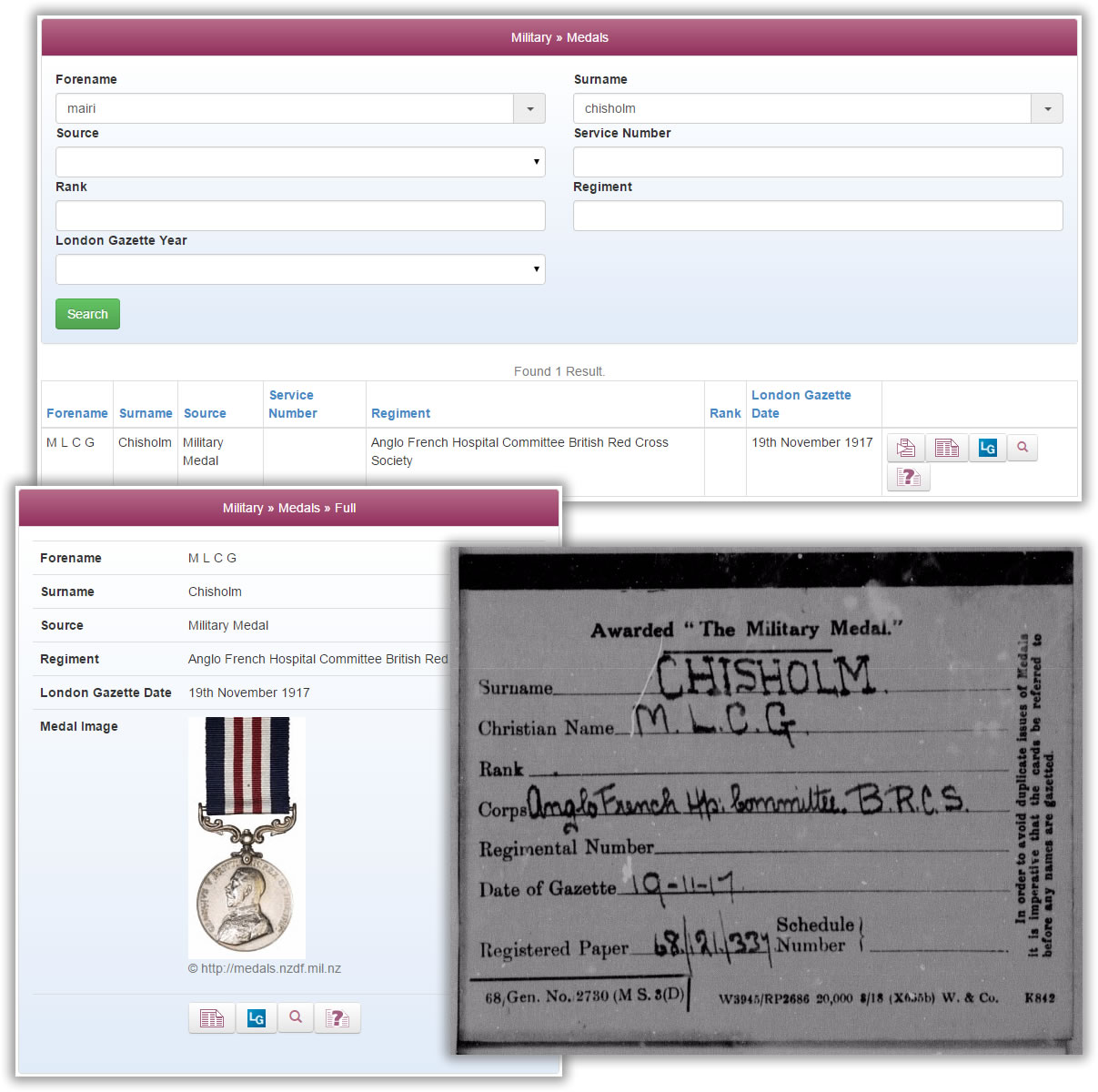 Mairi Chisholm's record is easy to find at the site. It shows what the MM looks like, and includes the original medal index card.

Chisholm and Knocker soon came to the conclusion that they could save more lives by treating the wounded directly on the front lines. In November, they decided to leave the corps and set up their own dressing station five miles east in a town named Pervyse, north of Ypres, just 100 yards from the trenches. Here, in a vacant cellar, the pair would spend the next three and a half years tending to the wounded. No longer affiliated with the Belgian Red Cross, they began acting completely as free agents and had to support their work by raising their own funds.

As the British Army began to accept women could play a direct role in the war, more women volunteered and the First Aid Nursing Yeomanry (FANY) became an established part of the medical framework. Women who volunteered had to pay a joining fee and contribute 10 shillings a week for supplies. Some of those stationed in France brought their own cars with them, which were converted into ambulances. During cold weather, the women had to run the engines of the ambulances every hour to prevent them from freezing up.

This comprehensive collection of Military Medal records at TheGenealogist.co.uk is not available elsewhere online and provides a great deal of detail for the family history researcher, including a scan of the actual Medal Card issued and a link to the London Gazette with full details on the heroic deed that earned them the medal.

The Military Medal collection at TheGenealogist.co.uk is easy to use. Here we search for records of William Harold Coltman, the most decorated 'other rank' of the entire war. 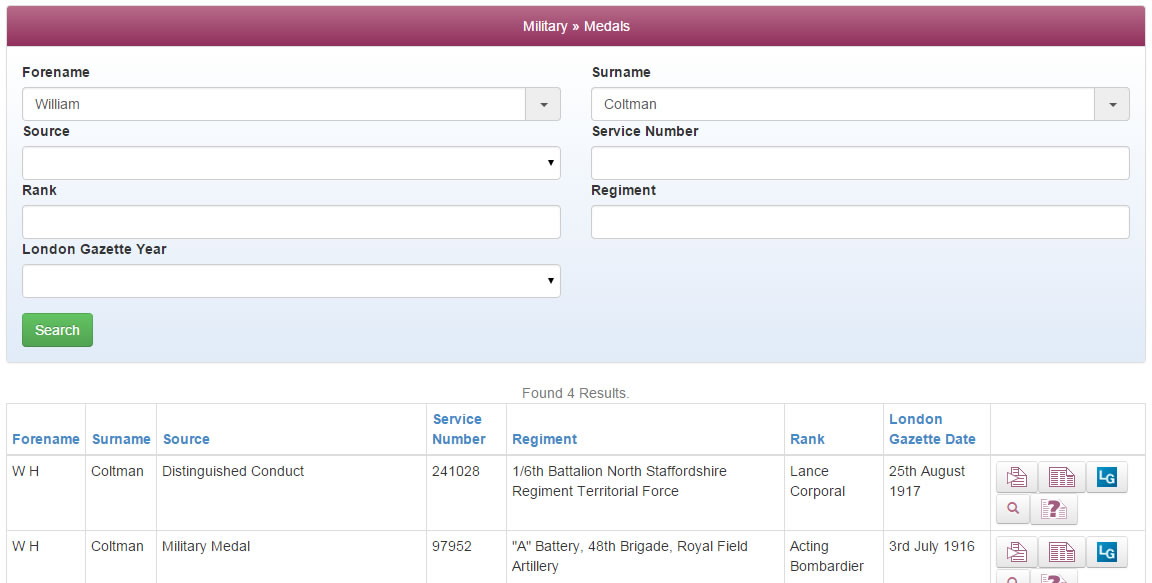