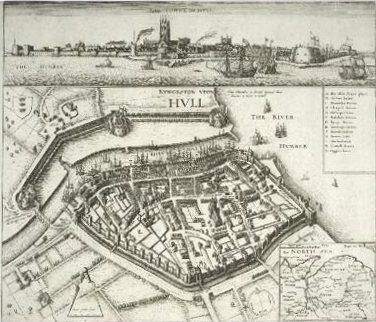 Located in the East Riding of Yorkshire, the city of Kingston upon Hull lies on the River Hull – hence the name it is usually known by. It is not on the coast, but some 25 miles inland from the North Sea; however, it has the air of a seaside city, given that it is located where the river meets the Humber estuary. It was founded in the 12th century, when monks at Meaux Abbey, near Beverley, built a quay and port from which they could export the wool the sheep on their estates produced.

In 1293, Edward I bought the port at Hull to use for his military campaigns north of the border. Six years later, he made the area a borough, and named it Kingstown upon Hull, and it grew to become a market town and then a centre for fishing and whaling. Local merchants were able to trade with Scotland and northern Europe, especially Scandinavian countries and the Baltic due to its favourable location.

It exported wool and cloth, and imported wine and wood, with its trading making the town prosperous.

In the 16th century, Meaux Abbey was closed by Henry VIII, and demolished. The stones from the abbey were subsequently used to build defences for Hull. It played a key part in the English Civil War – in the spring of 1642, Charles I was not allowed into Hull, being refused entry through the Beverley Gate by the town’s governor, Sir John Hotham – an act that may have precipitated the war. The people of Hull were supporters of the Roundheads during the Civil War, and found themselves twice besieged by royalists.

After the war, Hull continued to be important because of its proximity to the estuary; in the 1770s, a dock opened, and a decade later, the local shipyard, Blaydes, built HMS Bounty. A famous figure from the town at this time was William Wilberforce, who was the town’s MP from 1780; he would fight to end the slave trade. During this time, Hull was England’s biggest whaling port.

In 1845, Earle’s Shipbuilding was founded by brothers William and Charles Earle in Hull. It went on to build ships for the Wilson Line and other firms such as the Hull & Netherlands Steamship Company.

Hull is notable for having established its own municipal telephone system in 1902, and since then, it has remained unique in the United Kingdom for this separate system. In 1927, the University of Hull was founded, as University College Hull, an external college of the University of London.

Hull saw significant damage during World War 2, due to its strategic location – close to mainland Europe, and on a major estuary – and its port. Exclusive census analysis from data at TheGenealogist reveals that common surnames in Hull in the 19th century that stand out against the country in general included Thompson, Walker, Watson, Ward, Harrison, Atkinson and Marshall; plus Wilkinson and Foster in 1841 and Cook in 1911. The population rose from 41,000 in 1841 to 80,000 in 1911, with fishing and dock work dominating occupations.

Leading data website TheGenealogist.co.uk has a wealth of records for Hull and its county of Yorkshire. Here is a quick run-down of what you can find (in addition to national collections):