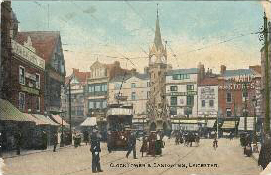 The first recorded use of the name Leicestershire was in the 11th century. Its boundaries have changed little since the Domesday Survey. In the 7th century, the region formed part of the kingdom of Mercia. In the 9th century the district was subjugated by the Vikings, and Leicester became one of the five Danish boroughs.

Among the earliest historical events connected with the county were the siege and capture of Leicester by Henry II in 1173 after the rebellion of the Earl of Leicester. Parliament was held at Leicester in 1414.

During the Wars of the Roses Leicester was a great Lancastrian stronghold. In 1485 the battle of Bosworth was fought in the county. In the Civil War of the 17th century, the greater part of the county favoured parliament, though the mayor and some members of the corporation of Leicester sided with the king. In 1645 Leicester was twice captured by the Royalist forces.

The county has a long history of agriculture, particulary dairy farming. The woollen industry flourished in Leicestershire in Norman times, and in 1343 Leicestershire wool was rated at a higher value than that of most other counties. Coal was worked at Coleorton in the early 15th century and at Measham in the 17th century. The modern Snibston Discovery Park is built on one of three coal mines that operated in Coalville from the 1820s until 1986. Blue slate has been quarried at Swithland for centuries, and a limestone quarry at Barrow-on-Soar is also very ancient.

The staple manufacture of the county historically, hosiery, originated in the 17th century, the chief centres being Leicester, Hinckley and Loughborough. Before the development of steam-driven frames in the 19th century, hand framework-knitting of hose and gloves was carried on in about a hundred villages. Woolcarding was also an extensive industry before 1840.

Other industries in the county have included the manufacture of boots and shoes in Market Harborough, plus brickmaking and iron founding. Melton Mowbray gives its name to a well-known manufacture of pork pies, and since the mid-18th century, Stilton cheese has been made near there.

Leicestershire is considered to be the birthplace of fox hunting as it is known today. Hugo Meynell, who lived in Quorn in the 18th century, is known as the father of modern fox hunting. Melton Mowbray and Market Harborough have particular associations with the sport.

Engineering has long been an important part of the economy of Leicestershire. John Taylor Bellfounders continues a history of bellfounding in Loughborough since the 14th century. In 1881 John Taylor cast the largest bell in Britain, ‘Great Paul’, for St Paul’s Cathedral in London. Meanwhile Norman & Underwood has been making sandcast sheet lead roofing and stained glass since 1825, working on many of England’s major cathedrals and historic buildings.

Exclusive census analysis from the data at TheGenealogist.co.uk reveals that common Leicestershire surnames include Ward, Clarke, Cooper, Hill, Moore, Allen and Bailey. Green and King were also common in 1841, as was Harris in 1911. Census occupation data also shows framework knitters and stocking makers among the leading trades in the county; by 1911, hosiery hands and shoe machinists were near the top of the list, although outnumbered now by coal mine hewers.

Leading data website TheGenealogist.co.uk has a wealth of records for Leicestershire. Here is a quick run-down of what you can find (in addition to national collections):