A large and eclectic collection of name-based data has gone online – is your ancestor in there?

Family history is of course a discipline, requiring proper research skills and methodologies to be learned and a knowledge of specific archives to be learned over time. The fact remains, though, that sometimes it's serendipity which can advance our research when a brick wall seems insurmountable.

Newly online at data giant TheGenealogist is an extensive and diverse collection of almost 37,000 names which offers something of a lucky dip to family historians. The TNA Names collection (previously known as PRO Names and only available as three separate indexes on CD) brings together a wide range of references to personal names found across many different series of records held at The National Archives (TNA) in Kew, London. It was originally compiled by the researcher Stuart Tamblin between 1997 and 1999 and is now online, fully searchable at TheGenealogist. Many of the records are military in origin – but by no means all.

The first of the three original indexes which form this collection had more than 13,000 entries, around 50% relating to the Royal Navy and Royal Marines, with a further 30% having their source in the Army or Royal Air Force; around 5% of these records relate to criminals such as smugglers.

The second set, again around 13,000 records, was also dominated by the Navy and Marines, but a quarter of the records this time related to criminals. In addition there were around 1000 records relating to policemen. Another 10,000 records formed a third index following a similar pattern to the others.

In total almost 40 different series of records at The National Archives are represented in this data. The military collections include muster rolls or crew lists of particular vessels such HMS Neptune in 1805 (and even HMS Bounty from 1787), casualty lists, court martials and medal rolls, plus a list of soldiers executed between 1914 and 1920. Other collections represented include hospital registers, 'criminal lunatics' from Bethlehem Hospital and other asylums in the 19th century and smaller collections as diverse as Cheshire jurors from 1813 to records of the Liverpool Necropolis Burial Ground.

The time span is also wide: the earliest records in the combined collection date from 1604 and the most recent from 1995 (making due allowance for Data Protection legislation).

TheGenealogist's easy to use interface allows the data to be searched by name, rank (where appropriate) and year, with advanced options for service/organisation and military unit. The results that are returned then include the TNA series reference for tracking down the original documents at Kew – these may include more information, of course. These references are conveniently hyperlinked directly to TNA's new Discovery catalogue system.

As Mr Tamblin wrote with the original collection, "This index should be looked upon as a pointer to original records, indicating which classes might fruitfully be searched once you have found a name of interest."

Overall this collection forms a rich treasure trove in which you might just find that elusive piece of information needed for exploring an ancestor's life further, especially if they had military or criminal connections.

As an example, if we search for an Albert Brice, this collection brings up Albert Bertram Brice, who served on HMS Shark in 1916. Clicking the TNA reference (ADM 104/146) pinpoints him in a register of the killed and wounded. We can also look up at TheGenealogist's Master Search to make connections with other records. A roll of honour confirms he died in the Battle of Jutland at the age of 21, and gives his parents' names, which can be used to track the family back in census and civil registration records at the site. 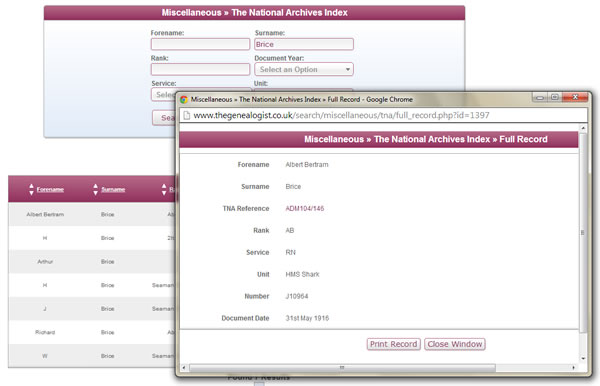