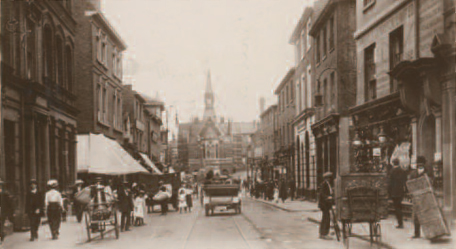 The foundation of Luton is usually dated to the 6th century, when a Saxon outpost was founded on the river Lea (or Lugh), ‘Lea tun’.

In the time of the Domesday Book in the late 11th century, the town’s population was around 700–800. Agriculture dominated the local economy at this time.

A motte and bailey type Norman castle, which gives its name to Castle Street was built in 1139, just two years after St Mary’s church was completed. The castle was demolished in 1154. During the middle ages Luton was recorded as being home to six watermills.

The town had an annual market for surrounding villages in August each year, and with the growth of the town a second fair was granted each October from 1338. In 1336, much of Luton was destroyed by a great fire, but the town was soon rebuilt.

The agricultural base of the town changed in the 16th century with a brickmaking industry developing around Luton, and many of the older wooden houses were rebuilt in brick.

During the English Civil War of the 17th century there were two incidents in Luton, the first in 1645 when Royalists entered the town and demanded money and goods before being captured by Parliamentarian forces. A second skirmish occurred three years later.

It was in the 17th century when the hatmaking that became synonymous with the town began. By the 18th century the hatmaking industry, especially straw hat manufacture, dominated the town as its only significant industry. Hats are still produced in the town on a smaller scale.

The town grew strongly in the 19th century: in 1801 the population was 3,095; a century later it has grown more than tenfold. A railway connection was essential for this growth, and there was a long delay before this was provided. The London and Birmingham Railway (L&BR) had been built through Tring in 1838, but a branch was only extended to Bute Street Station in 1858; Midland Road station opened in 1867.

Newspaper printing arrived in the town in 1854, also the year the first public cemetery was opened. Following a cholera epidemic in 1848, Luton formed a water company and had a complete water and sewerage system by the late 1860s. Luton was made a borough in 1876.

In the 20th century, the hat trade severely declined and was replaced by more modern industries. In 1905, Vauxhall Motors opened the largest car plant in the United Kingdom in Luton (it eventually closed in 2002). In 1914 Hewlett & Blondeau built an aircraft manufacturing plant in Leagrave which later became Electrolux in 1926. Luton Airport opened in 1938.

In World War Two, the Vauxhall factory built Churchill tanks as part of the war effort. This made Luton a target for the Luftwaffe and the town suffered a number of air raids.

Exclusive census analysis from the data at TheGenealogist.co.uk reveals that common Luton surnames include Cook, King, Cooper, Allen, Harris, Clark/e and Day; plus Odell, Pratt, Green, Chapman, Waller and Cox were common in 1841, as were Ward, Fensome, Burgess, Bird, Carter and Hill in 1911.

The censuses also show the importance of the hat trade – among the most common occupations listed in 1841 were straw bonnet maker, straw plaiter and bonnet sewer.