Nick Thorne looks at the inventor of wireless telegraphy and how archival records can tell us more about him.

On 7 May 1915, a terrible disaster took place off the south coast of Ireland. The RMS Lusitania was sunk by a German U-boat firing a torpedo at the ship. This action resulted in the loss of 1,198 passengers and crew. Germany had declared the seas around the United Kingdom a war zone and the German embassy in the United States had placed a newspaper advertisement warning people of the dangers of sailing on the Lusitania.

Three years earlier, in the early morning of 15th April 1912, another shipping disaster has taken place when the RMS Titanic had gone down in the North Atlantic. This event, as most people know was not a result of enemy action, but was caused a collision with an iceberg. More than 1,500 people died in the sinking of the Titanic, but over 700 survived the catastrophe. These survivors owed a huge debt to the fact that the ship had been fitted with the latest communications technology of the time: Wireless telegraphy.

This invention of Guglielmo Marconi was ,by now, to be found on many of the ships crossing the atlantic - the Lusitania being no exception. As she listed dangerously close off the Irish coast having been hit, the radio operator sent out SOS messages. The Marconi International Marine company was responsible for employing the men who worked the radios, rather than the shipping companies, and so it is to them that credit goes.

A look within the pages of the book The Sinking of the Titanic, which can be found under the reference books collection of TheGenealogist, shows that larger ships, such as the Titanic carried two radio operators, whereas small ships only had one. Marconi when questioned by the United States Senate investigation (as reported in this publication) that ships should always have a radio operator on duty. He pointed out, however, that ship-owners didn't like to carry two, presumably for economic reasons.

By searching TheGenealogist's International Records collection for passenger lists, we can find the telegram rates onboard the RMS Cedric, a liner from the period. From this, we can see that the Marconi company offered a Long Rage Wireless Service for communicating with land throughout the voyage as well as a service when the ship was closer to land. Also available was the ability to have an ocean letter sent, which was when a ship in range, and going in the opposite direction, could post a letter that a passenger had dictated at the first point of call. 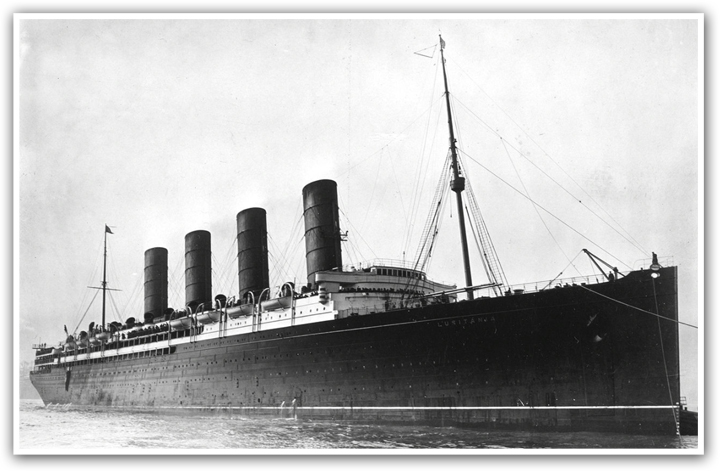 Another digitised book within TheGenealogist's reference collection, The Deathless Story of The Titanic, guves us an idea of what a wireless cabin on a ship of the time looked like- and how Jack Phillips, the Marconi operator on the Titanic sent out the call for help. 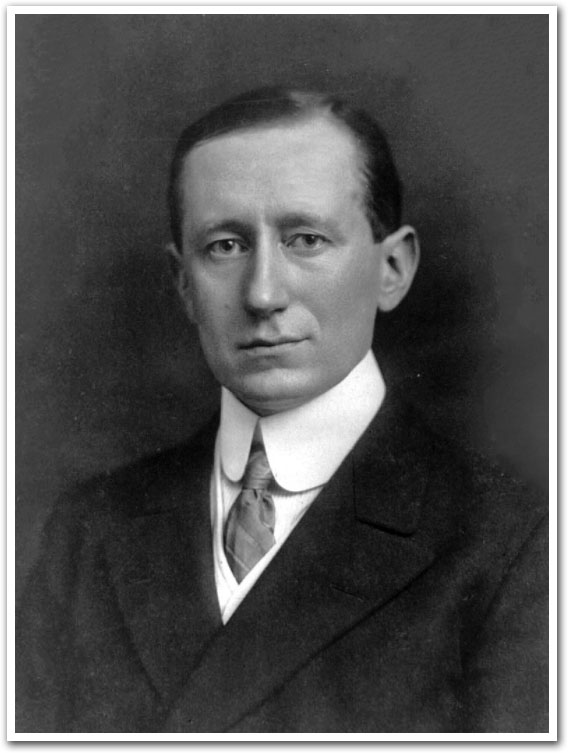 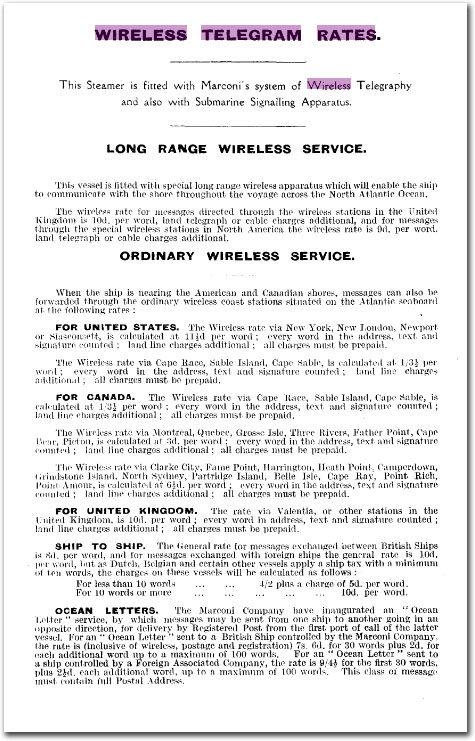 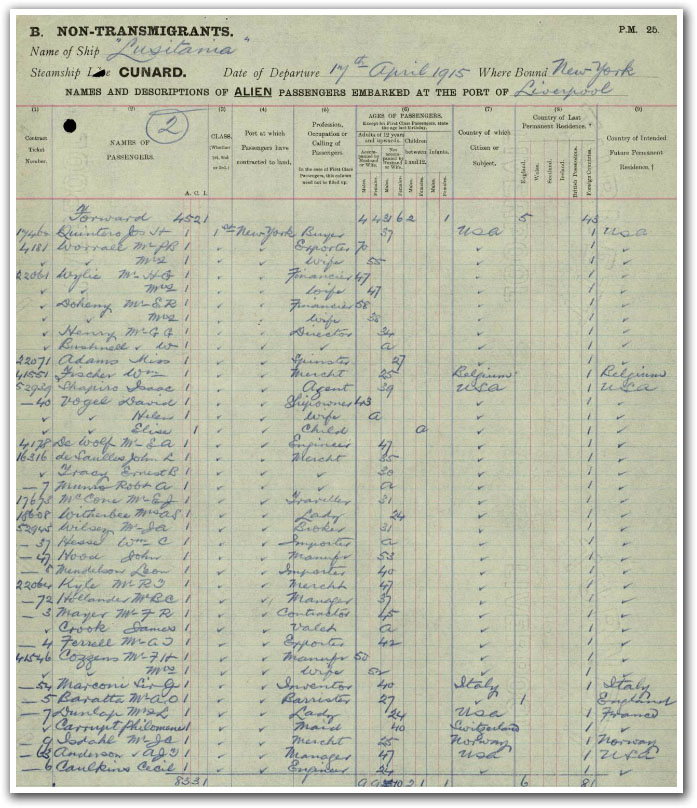 'Sir G Marconi', recorded in the passenger list for the Lusitania's last outward voyage in April 1915

What are we able to find out about the inventor of wireless telegraphy> From the records on TheGenealogist, we are able to learn quite a bit about Anglo-Italian Guglielmo Marconi. He had been born in 1875, and Kelly's Handbook to the titled landed and official classes in 1918 reveals that he was, at time of publication, a chevalier or knight. As an Italian national, he had been made an honorary knight of the Royal Victorian Order in Britain, while also being honored by Russia as well as his homeland in Italy. We can also see that he was a senator of Italy and held honorary doctorates from Oxford, Glasgow and Liverpool university.

Scanning the entry, we can see that he was married to a member of the British Aristocracy, the Honorable Beatrice, sixth daughter of the 14th Baron Inchiquin. Using the date that Kelly's Handbook provides, we can then check the marriage records on TheGenealogist to see where the wedding took place. In the first quarter of 1905, in the district of St George Hanover Square, London, we can find the union recorded between Guglielmo Marconi and Beatrice O'Brien.

Hi Marriage to an Irish woman was certainly not the first in his family. Marconi's mother was in fact Annie Fenwick Jameson, born in Ireland to Scottish parents, and part of the Jameson whiskey family. We can find the marriage of Guglielmo Marconi's parents, Annie and Giuseppe Marconi, in the overseas consular marriages on TheGenealogist. The records show that the marriage took place at Boulogne, France, in April 1864.

When the younger Marconi married his Irish noble woman, he had already made a name for himself. We can find a reference in the Navy List of 1904 - the year before his marriage - for Marconi's successful demonstration of his invention of wireless telegraphy to the Royal Navy. With the outbreak of World War 1, Marconi was made Chief of the Italian Wireless Service. The Illustrated London News of 17 July 1915 published a photograph of him in his Italian uniform on an inspection tour. The caption indicated that not only was wireless on both land and see, but that he was experimenting with ultra-violet rays which would 'enable him to see objects through a 23 1/2-inch wall'.

It would seem that Marconi often traveled between Italy, Britain and the United States. In september 1918, a couple of months before the end of the First World war, he was pictured - this time in an Italian naval uniform - accompanying the Prince of Sonnino and the Mayor of Rome on a visit to England.

A search if the Trade, Residential and Telephone Directories on TheGenealogist furnishes us with the address for Marconi's British business between the two World War's. The Post Office Directory for 1927 lists Marconi House as being on the Strand in London. Fast forward to 1936 and we can see, by looking at The Directory of Directors of that year, that Marconi had by now become an Italian Marchese - the equivalent to the British aristocratic rank of Marqurss. His British business now occupied Electra House on Victoria Embankment in London.

Apart from being the inventor of technology that had a significant part to play in aiding the rescue of the survivors of The Titanic and Lusitania, Marconi had another connection to both unfortunate vessels. Although he was not on either ship when they went down, it could of been said that he had a brush with death in each case.

Marconi avoided the Titanic disaster by choosing to sail to New York on an earlier crossing by the Lusitania - and he then missed that particular ship's demise by having sailed outbound on her last voyage westwards, the liner being sunk by a German U-boat on her return journey to Europe. TheGenealogist has recently been adding to its BT27 passenger list records which have been reproduced courtesy of The National Archives. Searching these records finds Marconi on a voyage leaving Liverpool on 9 March 1912. This was an Atlantic crossing that took place one month before the Titanic sailed on her maiden voyage. He is listed as 'WM Marconi' - the anglicized and shortened form of his Christian name Guglielmo. Some reports say that he had been offered a passage on the Titanic, but preferred to take the Lusitania as he had a lot of work to carry out - and also that he preferred the stenographer on the Lusitania.

If he do a search for Marconi in 1915, we can also discover him recorded as 'Sir G Marconi' sailing on 17 April 1915 - the Lusitania's last outward passage before it was sunk on it's return. He is recorded as having undertaken various other trips, including one to Montreal in August 1911. Here, his naval rank of commander was entered in the passenger list on the White Star-Dominion Line ship Laurentic. Although his invention has been used to save countless lives aboard stricken vessels, Marconi was saved by luck, being twice lucky enough to avoid going down with a ship. By using the records on TheGenealogist

, we have been able to piece together the inventor's lucky escape from two ships ill-fated voyages. 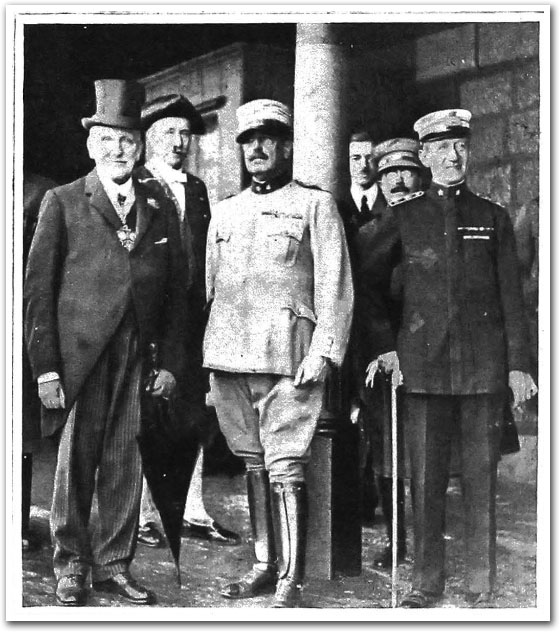 Marconi, again pictured in the Illustrated London News, this time from 28th September 1918

Kellys Handbook to the Titled Landed and Official Classes, 1918