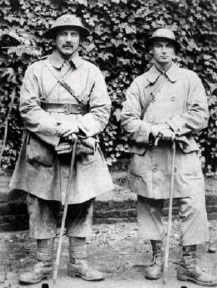 Captain Bernard L Montgomery, DSO (on the right),
with a fellow officer of 104th Brigade, 35th Division,
with which he served from January 1915 until early 1917

TheGenealogist.co.uk has released more than 81,000 records of people Mentioned in Dispatches in World War One. With this collection you can find soldiers and army nurses that had come to the notice of their superior officers for an act of gallantry, or meritorious action, in the face of the enemy. The service person's name would have appeared in an official report, written by a superior officer and then sent on to the high command.

Soldiers who were mentioned in dispatches (MiD) did not receive a medal for their action, but nevertheless were entitled to receive a certificate and wear a decoration. This decoration in WW1 (and up until 10 August 1920), consisted of a spray of oak leaves in bronze. From 1920 to 1993, the design of the decoration changed to be a single bronze oak leaf and since 1993, the decoration in Britain has now become a single silver oak leaf.

The oak leaf is pinned, or sewn diagonally, on to the appropriate campaign medal ribbon and in cases where no campaign medal has been awarded, then the decoration is worn on the left breast of the dress uniform. Only one such decoration is ever worn, even when a soldier is mentioned in despatched more than once, as was the case in the example of Captain B L Montgomery.

These records are now uniquely searchable online at The Genealogist, and linked to the original citations in the London Gazette.

Bernard Law Montgomery served in The First World War in the Royal Warwickshire Regiment and was mentioned in dispatches on several occasions.

Using the MasterSearch features at TheGenealogist.co.uk, we can search for Bernard Law Montgomery in the new 'Mentioned in Dispatches' records. We find Captain Montgomery no less than four times, the first of which is in 1915. 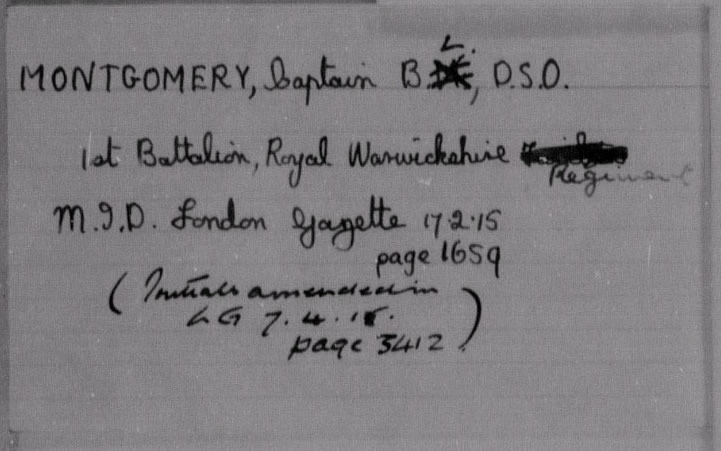 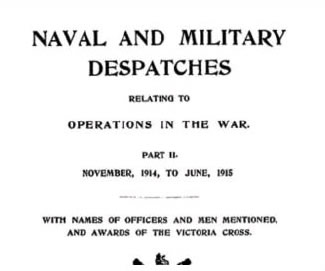 With one mouse click on the link to a transcript we can see the date the citation appeared in the London Gazette and note the date and page number for our research.

Another click takes us straight to the website of the London Gazette itself, where we can then read the various pages that cover our soldier. By using the information from the transcript we can narrow our research right down to the correct page.

Following a third link on The Genealogist's results page gives us an image of the handwritten card record, in this case showing even the military clerk's corrections and crossing outs.

A further option is the link to the actual listing in the Naval and Military Despatches publication. It's now possible to view your ancestor listed in the actual government publication of the time.

Awarded many medals in his time, including the DSO to which his oak leaf is pinned, he served between 1915 and 1918 ending WW1 as a Lieutenant Colonel. He was, as history tells us, to go on to become Field Marshall Montgomery and the 1st Viscount Montgomery of Alamein, one of this country's most important World War Two generals. 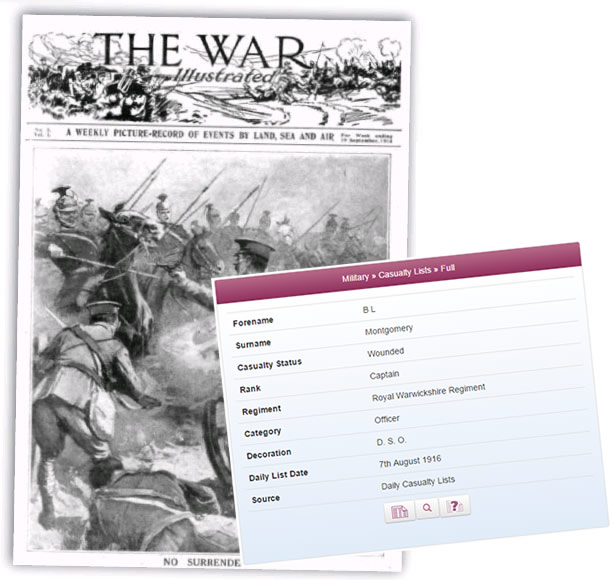 As a junior officer serving at Meteren near to the Border of France with Belgium he had been shot by a sniper through the right lung in October 1914. He fought in the Battle of Le Cateau and in the retreat from Mons in 1914. The War Illustrated News Collection at TheGenealogist.co.uk gives details on the desperate struggle Bernard Montgomery and the British Army found themselves.

With the rich number of military records at TheGenealogist, we can also find him in the casualty lists. One click will then take us to an image of a page from the Times newspaper of October 20th 1914 in which he is listed.

Montgomery was hit once more through the knee and was awarded the DSO for his gallant leadership when he turned the enemy out of their trenches with the bayonet.

Once Captain Montgomery had recovered he went back to the Western Front in 1916 as a general staff officer, where he was again wounded.

He was back in action the following year taking part in the Battle of Arras in spring 1917 and also the Battle of Passchendaele in the autumn of that year and ending his war as chief of staff of the 47th (2nd London) Division.

We find part of a letter written by the Mayor of Arras after the battle and published in The Great War publication found at TheGenealogist. 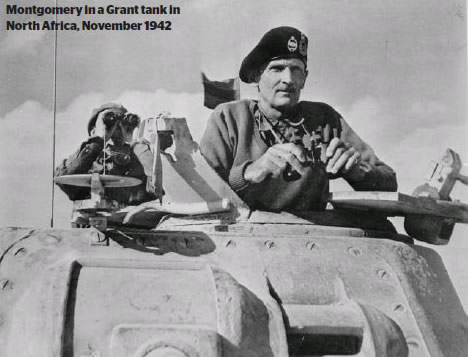 ...to Monty the Desert Rat

In WW2 he assumed command of the Eight army from 1942 in the Western Desert, the so-called 'Desert Rats' and went up against the legendary German Commander, Erwin Rommel, the 'Desert Fox' and his forces in Africa. This time was to include the Battle of El Alamein which was a turning point of the Western Desert Campaign. 'Monty' went on to command the Eight Army in its part in the Allied invasion of Sicily and subsequently Italy.

As the war wound on to its close, during Operation Overlord he was in charge of all Allied ground forces and on the 4th May 1945 he took the German surrender at Luneburg Health in north Germany. After the war was over Field Marshall Montgomery became Commander-in-Chief of the British Army of the Rhine and then Chief of the Imperial General Staff. From 1948 until 1951 he was chairman of the permanent defence organisation of the Western European Union and in 1951 deputy commander of the Supreme Headquarters of NATO.

Known for his lack of tact, he had upset the American generals Paton and Bradley during WW2 and after the hostilities he criticised many of his war-time colleagues, including General Eisenhower who was by now the President of the United States. Monty was, it is safe to say, a complex but brave man who served in the British Army for 50 years. He died on 24 March 1976.

The Mentioned in Dispatches records are now available to view for all Diamond Subscribers. 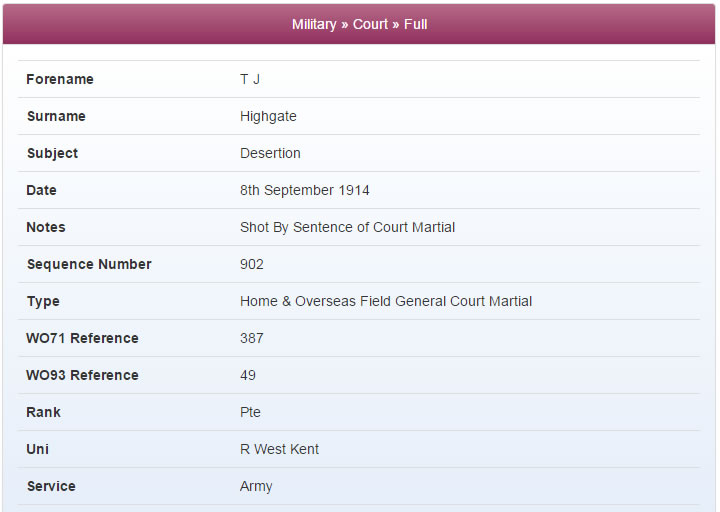 Continuing its extensive addition of military records in 2014, TheGenealogist.co.uk has now brought online the Home and Overseas General Court Martial records covering the years from 1879-1927. The new records take into account the hundreds of British and Commonwealth soldiers in World War One that were executed for cowardice and desertion.

In the records we find for example Private Thomas James Highgate (see left) who was the first British Soldier to be shot for deserting his unit in the retreat from Mons in 1914. Military justice at the time saw the defendants receive a hasty and one-sided trial in line with emergency wartime military procedures. Death sentences had to be agreed by the Commander-in-Chief, who was expected to take the current military situation into account. With the British Army in retreat after the first battle at Mons, senior officers made a decision to stamp out any thoughts of desertion and Private Highgate suffered the highest punishment.