Ancestors magazine was published by Wharncliffe Publishing Limited and The National Archives. It has now ceased publication.

Army Lists of officers have been published since 1740, although the English standing army was established much earlier in 1661. Thus, information about early members was hard to come by until the late 19th century when Charles Dalton went through the State Paper Entry Books in the Public Record Office to remedy this. English Army Lists and Commission Registers 1661-1714 (S&N, £17.95) was originally published in six volumes from 1892. It is an invaluable source of information about army officers in this period, especially as it includes other biographical details about the careers for many of the individuals listed. 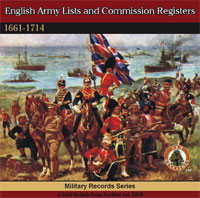 After the end of the First World War a massive project was undertaken by a commercial publisher to detail the war work done by all the men and women who served both overseas and on the domestic front. This work, which was never completed, was issued in several volumes arranged according to where people lived. The National Roll of the Great War: Section 5 (S&N, £16.95) covers the Luton area, including parts of Hertfordshire. Each entry includes a brief summary of the individuals' wartime careers, any medals awarded and, usefully, their addresses, which should point family historians towards further sources of information.

Baronets are the lowest order of hereditary titles and the rank was created by James I. Extinct and Dormant Baronetcies of England, Ireland and Scotland (S&N, £17.95) was originally published in 1844, by which time the author noted that nearly 1,000 baronetcies had ceased to exist, although, as he rather wistuflly said, there might be relatives and descendants. The Victorians, of course, were mainly interested in genealogy for snobbish reasons, keen to prove themselves of royal or at least noble descent. Today, the interest for family historians in this work lies mainly in the genealogical information it contains, especially about female ancestors who, of course, changed their surnames on marriage and would not, except in rare cases, inherit titles. There is a search facility which makes checking whether and individual was connected to one of these baronetcies a simple task.

During the Commonwealth period (1649-1660) all wills were proved in the Prerogative Court of Canterbury (PCC). Before and after this time, local church courts dealt with the wills of the less well to do. Commonwealth Probates 1650-1651 (S&N, £17.45) contains abstracts of the wills proved in two years of the period. Full transcriptions are not given, just the name of the testator, place of residence, relevant dates and who the will was proved by. The latter usually includes their relationship to the deceased, so can be useful. Some entries contain additional information, like occupations. Now that the PCC wills are online (www.thegenealogist.co.uk), this will probably be of more use to local historians interested in places rather than individuals, although family historians may find that the relationship of the testator to the person proving the will opens up other avenues of research. 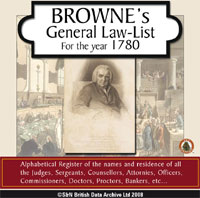 Browne's General Law-List for the Year 1780 (S&N, £17.95) lists all the judges, attorneys and officers involved in the legal system of the late 18th century in England and Wales. It details the judges' circuits as they went round their regions hearing cases, and there is a list of each town and the attorneys working there. All the lesser known courts in London, like Poultry and Ward Street Compters, are listed with the legal offices attached to them. The business of some of the more obscure courts, like the Marshalsea, are explained but Browne seems to have been writing primarily for fellow lawyers who knew their business.

By 1900 the legal profession had grown considerably and The Solicitors' Diary, Almanac and Legal Directory 1900 (S&N, £17.95) is a substantial work, going beyond a simple catalogue of names. It includes agents dealing with overseas business, ambassadors both British and foreign, and political agents. There are also sections on aspects of legal work which will provide family historians with background information on what their ancestors did.