More than 117,000 'Military Medals' were awarded in the First World War for 'acts of gallantry and devotion to duty under fire' to heroes from all walks of life. Now you can research these courageous young men and women in the newly released, unique, First World War Military Medal records collection online.

The Military Medal records are now available to view on the web, complete with an image of the original card noting the award of the Military Medal, and the date that the medal citation appeared in the official Government publication, the London Gazette.

The Military Medal records are a unique, comprehensive set of records available online only on TheGenealogist.co.uk. The Military Medal was awarded to 'Non commissioned Officers and Ordinary Ranks' from 25 March 1916 and covers those demonstrating exceptional courage as a soldier in battle. It was also awarded to those who risked their lives trying to save others, often while facing extreme danger themselves, including a number of young women from very privileged families who chose to drive ambulances, rescuing and nursing those wounded on the battlefields.

Details now available on TheGenealogist from those of the most highly decorated Military Medal recipient- stretcher bearer Private Ernest Corey of the 55th Australian Infantry (who was awarded the Military Medal four times) – to Lady Dorothie May Evelyn Fielding-Moore, the daughter of the Earl of Denbigh (who was the first female recipient of the medal), to Mairi Lambert Gooden-Chisholm who rescued a German pilot from no-man's land.

TheGenealogist's 'SmartSearch' tool links Military Medal records to the comprehensive range of other military sources published on the site to help you research your First World War serving ancestors.

To find out more about the heroic recipients of the Military Medal, go to TheGenealogist.co.uk/military-medal. There you will find photographs, stories of the acts of gallantry and a free search facility.

Search for those rewarded for heroism.

Details include rank, regiment and date of citation. 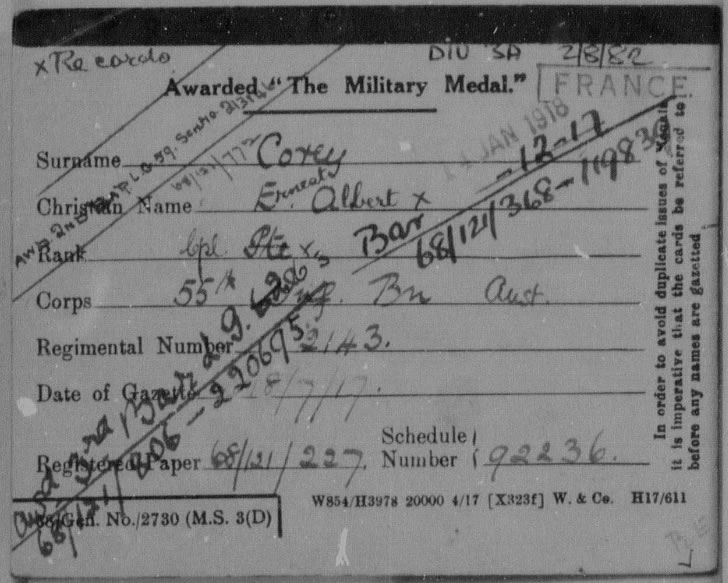 Click to view an image of the original medal cards. 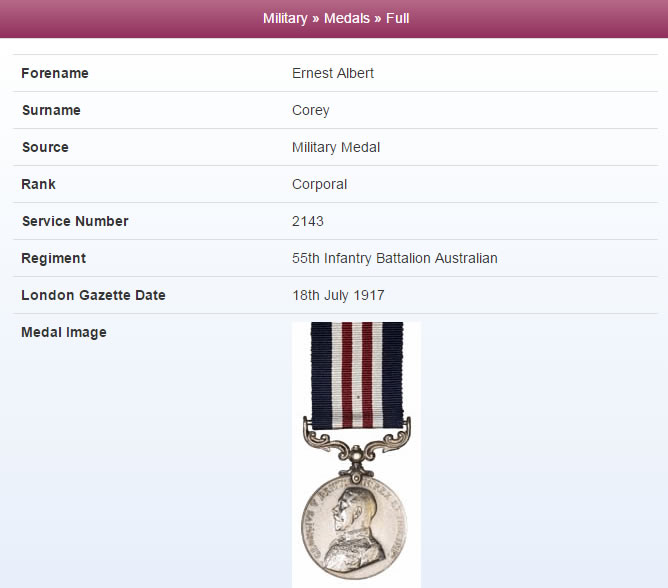 Trouble with the handwriting? Read the transcript provided.