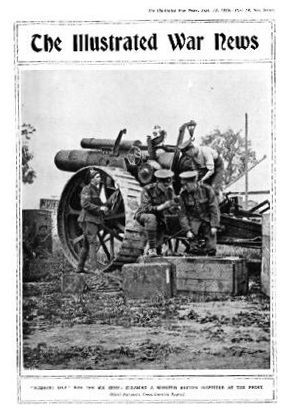 TheGenealogist has announced the addition of two new record sets that will be useful for researching the First World War and Victorian soldiers. Part one of this release is The Worldwide Army Index for 1851, 1861 and 1871, which adds another name rich resource to the already vast Military record collections at TheGenealogist, with more than 600,000 records.

Also released at the same time are another 3,368 pages from The Illustrated War News, covering 6 September 1916 to 10 April 1918 and adding to those previously made available for this First World War paper from 1914 to 1916.

If you have not found your ancestor in the various British census returns, and you know that they may have been serving at the time in the British Army, then this new release from TheGenealogist may help you to find these elusive subjects.

Many thousands of men of the British Army were serving overseas in far flung parts of the British Empire over the 1800s. This index of names is compiled from the musters contained in the WO 10-11-12 Series of War Office Paylists, held at the National Archives, Kew. The 1851, 1861 and 1871 Worldwide Army Index lists all officers (not in 1861) and other ranks subjects serving in the first quarter of 1851 and second quarter of 1861 and 1871, together with their regimental HQ location. The index is, therefore, effectively a military surrogate for the relevant census.

Over 70,000 records have extra notes that can indicate whether a soldier was a recruit awaiting transfer to a regiment, detached from his regiment or attached to another, possibly discharged, on leave, had deserted or retired. Men identified as using aliases are also included. Many notes include a place of birth and former occupation.

Also included within the records are recruits, boy soldiers, bandsmen and civilians working in the armed forces as clerks, pension recruiters, teachers and suchlike. Colonial regiments which invariably had numbers of British subjects are also featured.

The Illustrated War News was a weekly magazine during the First World War, published by The Illustrated London News and Sketch Ltd of London. The IWN publication contained illustrated reports related entirely to the war and comprised articles, photographs, diagrams and maps. From 1916 it was issued as a 40-page publication in portrait format, having been landscape prior to this. It claimed to have the largest number of artist-correspondents reporting on the progress of the war until it ceased publication in 1918.

To search these and many other records go to www.thegenealogist.co.uk/search/advanced/military/muster-book-pay-list/.

Somerset and Dorset Family History Society worked with TheGenealogist to publish their records online, making over 2.2 million individuals from baptism and burial records fully searchable. Ann-Marie Wilkinson, the Chair of Somerset and Dorset FHS said: ‘The Somerset & Dorset Family History Society are very pleased to be working with TheGenealogist to bring these records into the online community. Also we will be able to provide access for members to TheGenealogist from our Research Centre.’

This release joins TheGenealogist’s Somerset and Dorset collection including Bishop’s Transcripts and parish records for many areas and years to form a major resource for the county.