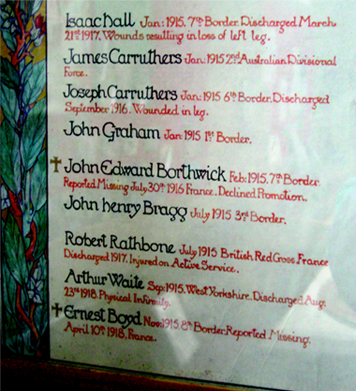 The Genealogist has added to the millions of UK parish records already available at the site with more than 282,000 new, fully searchable records from Essex, Cumberland and Norfolk. Some of the records go back as far as 1672.

Among the new records is the burial of one Edward Bright in the year 1750 at All Saints Church, in Maldon, Essex. Edward, a tallow chandler and grocer who died in his late twenties, also had an unusual claim to fame: he was in fact believed to be the fattest man in England at the time. His burial record goes into unusual detail about his weight (42 stone), the size of his coffin and indeed the details of his personality.

Meanwhile the addition of 43,000 more war memorials takes the site’s collection of these to more than 350,000 searchable records. This latest release includes war memorials from London, along with many from Cumbria, Berkshire, Warwickshire and Suffolk. The collection also stretches across the globe to encompass memorials in Perth, Australia and Saskatchewan in Canada.

Researchers can read transcriptions and see images of the dedications that commemorate soldiers who have fallen in the Boer War, WW1 and various other conflicts.

Among these newly-published records are those from St John’s Church in Bassenthwaite, Cumbria. This is a fascinating WW1 roll with men who died or served and includes information such as that for Louis Willis Bell who died in Rouen as a result of poison gassing. Another notable entry is that for Isaac Hall (see picture). This soldier enlisted in January 1915 in the 7th Border Regiment and was discharged on 21 March 1917, because of wounds resulting in the loss of his left leg.